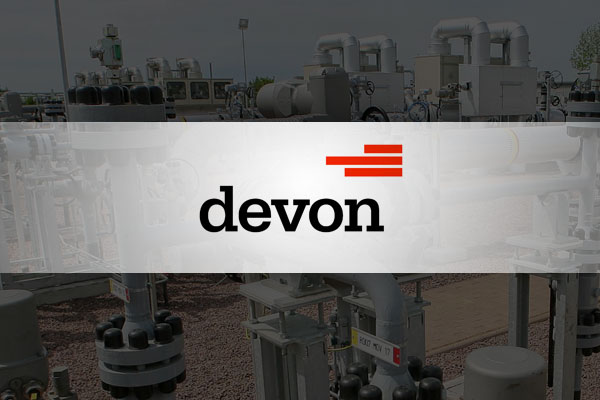 In the first quarter of 2018, Devon’s operating cash flow totaled $804.0M, an 11 percent increase from the fourth quarter of 2017. Devon stated a net loss totaling $197.0M, or $0.38 per diluted share, in the first quarter. The quarterly loss was attributable to a $312.0M charge related to the early retirement of debt. Adjusting for this one-time charge and other items securities analysts typically exclude from their published estimates, the company’s core earnings were $108.0M, or $0.20 per diluted share, in the quarter.

The company’s upstream revenue in the U.S. totaled $1.00B in the first quarter, a 36 percent improvement contrast to the fourth quarter of 2017. Contributing factors to the strong revenue growth were higher commodity price realizations and growth in higher-margin, light-oil production.

Devon’s midstream business generated operating profits of $277.0M in the first quarter, increasing 42 percent year over year. This growth was driven by the company’s investment in EnLink Midstream. Devon has a 64 percent ownership interest in EnLink’s general partner (ENLC) and a 23 percent interest in the limited partner (ENLK). In aggregate, the company’s ownership in EnLink has a market value of about $3.0B and is projected to generate cash distributions of $270.0M in 2018.

Per-Unit Production Expense to Improve Throughout 2018:

With growth in high-margin and low-cost production in the Delaware and STACK, per-unit production expense is projected to decline 5 to 10 percent by year-end 2018.

In aggregate, these G&A and interest-reduction programs position Devon to lower its costs by about $175.0M annually.

In the first quarter, Devon declared that its board of directors authorized a $1.00B share-repurchase program of the company’s common stock. As of the end of April, Devon had repurchased 6.20M shares under the program at a total cost of $204.0M, with an average share purchase price of $33. Devon anticipates completing the stock repurchase program by the end of 2018.

DVN has a market value of $22.55B while its EPS was booked as $0.39 in the last 12 months. The stock has 537.72M shares outstanding. In the profitability analysis, the company has gross profit margin of 85.50% while net profit margin was 0.90%. Beta value of the company was 2.22; beta is used to measure riskiness of the security. Analyst recommendation for this stock stands at 2.00.