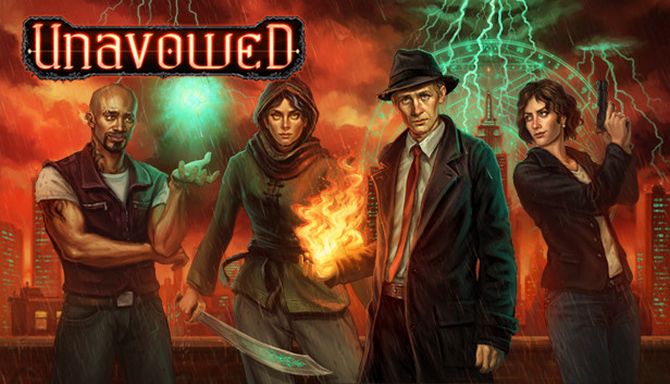 Unavowed isn’t  a game that should be taken lightly. It is set in New York City and deals with demons. There are puzzles to chase and a mystery to solve. An intense story line and adventure make Unavowed all the better. You can easily get attached to the characters and the apparently simple story line and gaming mechanics are a hoax.

Various stories end with the demonic possession coming to an end and the problem dealt with. but in Unavowed this is where the story begins from. You wake up surrounded by strangers who inform you, that you spent the last year on a murder rampage. Additionally people were on the lookout for you. these people are the Unavaowed a sacred ancient demon hunting squad. Now that the demon has left your host body you too join them in protecting the city. The game is spent in figuring out what happened to you and why you turned out the way you did.

A compactly written story line might be enough for some to become addicted to Unavowed but the game offers much more. it grants the players characters that are fascinating and magnetic. Every single person encountered in the game is brimming to the top with mystery. Everyone needs to be dissected and analysed. They all have stories; drinking habits, their haunting pasts and private troubles. All these contexts and backstories wrapped together with a enigmatic adventures make Unavowed one pretty dark but cool ride.

You can pick out what origin story you want; a bartender, an actor, or a policeman. All these further build out and branch into the sort of people you interact with. The origin basically also outlines the sort of adventure you will embark on.  It affects the way you interact and connect with people. This initial choice affects certain parts of the game. You can always start playing Unavowed from scratch to check all the surprises and perspectives that were initially left out of your story line.

The team members and the people you recruit and establish relationships will grow as Unavowed progresses. Furthermore, their fears, and wishes will soon come to surface. The game provides with a number of characters that are well rounded and have arching narratives. Their individual pasts and the voice acting all play a huge part in granting the player a very human contact with the game.

Your mystery hunt leads you to different part of the city; the Bronx, ChinaTown. The tasks you are stuck with to solve the mystery vary. At times you will have to decipher codes. The game allows you to play around with choices. But overall the best part of Unavowed is the adventure the well written characters and the suspense to uncover the truth.

Dota 2, A Set of New Record in International Tournament

The Ups And Downs Of Hori’s Switch Joy-Con