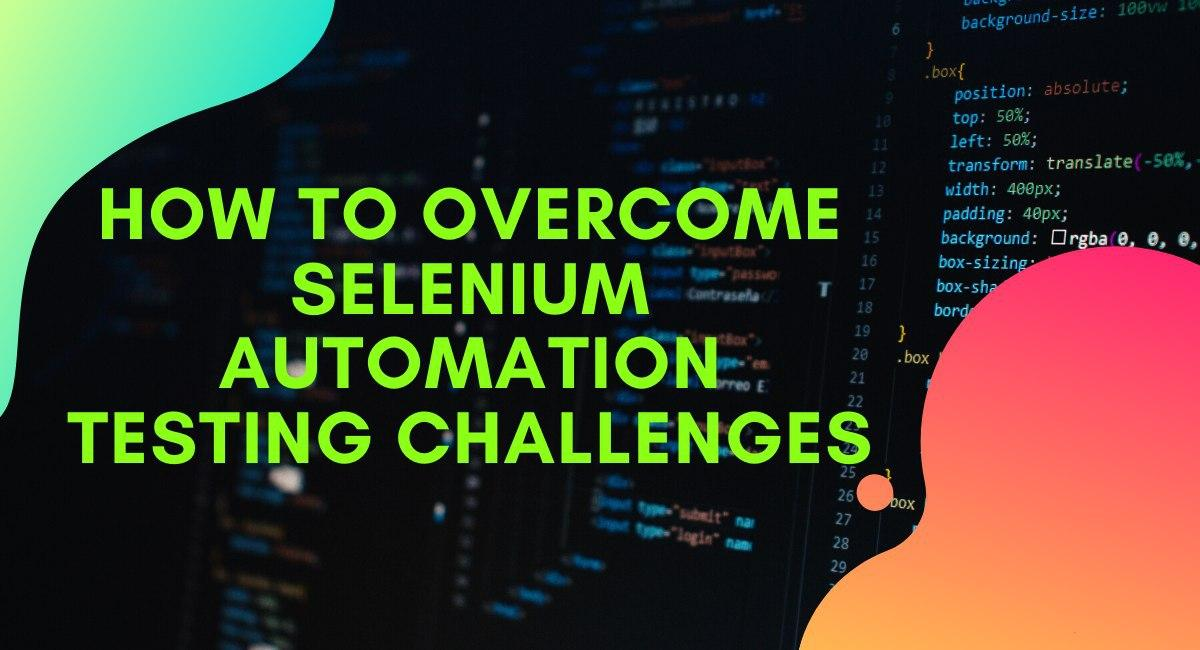 Selenium is a well-known test framework that is used to automate user actions on the product under test. Selenium is open source, and the Selenium WebDriver is the framework’s main component as it enables you to run tests across several browsers.

Though Selenium makes website or web-app testing straightforward, there are a number of Selenium automation difficulties that developers confront while using the framework. Let us take a look at what are the challenges faced in selenium & how to fix them?

1. Maintenance of Web Elements: Test maintenance is required in test automation. Maintenance is quite hectic and lump sum work but cannot be avoided as well. This is especially true for complex test scenarios. As a result, how would you manage the web components that you addressed in the Selenium tests? When utilizing the pure Selenium WebDriver for automation, it is possible to use the same web component several times. If the web component changes, you must manually locate and modify its occurrences. This must be done even after using the page object pattern to deal with web components. Find the updated code and fix it.

2. Cannot automate Mobile App Tests: Despite the fact that the Selenium framework is commonly used for testing websites or web apps across various browser and operating system combinations, testing is currently limited to non-mobile devices. As a result, testing your website or web app for mobile devices is one of the most difficult issues in Selenium automation.

If you want to execute test automation for mobile applications, there are several well-known open-source frameworks that you can use.

3. Setting up the External Data-Driven Testing in Place: The Selenium WebDriver does not have a data-driven testing technique. As a result, you will have to manually connect other data sources. For example, if you have an excel file with 50 data sets, you must export the data by writing 50 scripts for each data set, or writing one script and running it many times with various values. Of course, this is difficult and time-consuming. The lack of an external data-driven testing feature is a difficulty for Selenium automation.

This problem can be solved by importing the data and running the script with different data sets.

4. Problems with Timing: The problem emerges during the testing of dynamic web applications. It occurs when a query takes longer than expected to return the desired response. You must include a waiting mechanism in your code when utilizing Selenium automation. This will solve the problem.

5. Handling Pop-up Windows: There may be times when you need to automate interaction with pop-up windows; this is another of the most prevalent Selenium automation issues. Although Selenium WebDriver is unable to handle Windows-based warnings, it can handle web-based warnings. To handle pop-ups, utilize the switch_to method.

As the web becomes more complicated, the Selenium Testing Approach has become even more popular and broad. Selenium has made web testing very simple or significantly less complex yet there are various concerns because of its open-source nature. Many of the problems have a straightforward solution but there are few problems that require complex problem-solving techniques.