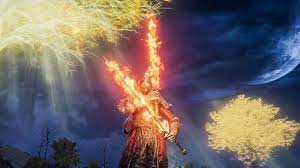 It is not necessary to have a certain minimum stat total in order to dual wield weapons; however, if you have the appropriate build, doing so can dramatically increase the amount of damage you deal. The following is a rundown of the measures that need to be taken in order for you to become proficient in dual wielding in Elden Ring.

Read Also: How to Get to Nokron, Eternal City in Elden Ring

At this stage, you have the ability to tie three different pieces of your equipment to either hand, and you can switch between them by hitting the right and left D-pad buttons on your controller. You have the option of wielding a great sword with your right hand while equipping a shield, magic staff, or seal with your left hand, which is the configuration that the majority of players will use. You have the option of equipping another weapon of your choosing if you do not wish to use shields, staves, or seals. You will not be able to make use of the Power Stance mechanism if the weapons that you have equipped are from distinct classes of weaponry. It is only possible to use weapon skills and heavy attacks with the weapon that is held in your right hand when you are dual wielding. Players also have the option of entering power stance while wielding two weapons at once. If both of your hands are armed with weapons belonging to the same class, you will receive an additional bonus. You will be able to perform new attack moves that are not possible to do with a single weapon after their move sets have been bound together. The increased damage that results from power stancing is due to the fact that both weapons are simultaneously striking the enemy. It is only possible to power stance with weapons that belong to the same class. This means that if you have a Curved Sword equipped in your right hand, you will need to equip another weapon that belongs to the Curved Sword class in order to power stance. The same basic idea may be applied to each of the different types of weaponry in the game.

You can enter the power stance move set by pressing L1 / LB when you are in power stance, and you can continue pushing it to finish the combination. You also have the option to hit the R1 and RB buttons on your controller, however doing so will cause you to only attack with the weapon that is held in your right hand. By pressing L2 and LT, you will be able to continue using the weapon skill associated with the weapon that is now equipped in your right hand. The Elden Ring features a very potent and useful mechanic known as power stancing. It not only causes you to deal more damage, but it also makes it simpler to disrupt the poise of your opponents, which can make a difficult battle a lot more manageable.

Despite the fact that there are specific benefits associated with dual wielding of weapons. It exposes the players in every way to the onslaught of the adversary. You are not able to defend yourself from attacks because you are not wearing a shield. You also lack the ability to deflect your adversaries’ attacks. If you are skilled at evading, the damage you inflict on your foes is more than compensated for by the risk of taking a few strikes yourself.

What do I press to dual wield in Elden Ring?

Is dual-wielding good in Elden Ring?

Before we get started with this guide, the most important question we need to answer is, “Should you truly dual wield in Elden Ring?” However, in this game, dual-wielding weapons will increase your damage output and have an effect on the speed of your assaults. This means that your assaults land more quickly and have more lethal combinations.

When seen side by side, it is easy to see that the two-handed method of wielding a weapon is superior to the dual wielding strategy in terms of both effectiveness and safety.