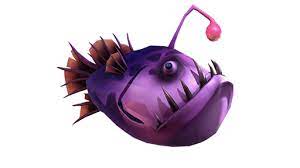 Sea of Thieves offers a unique and exciting experience for all players, whether you’re a veteran pirate or just starting out. One of the many things that make Sea of Thieves so much fun is fishing. In this guide, we will teach you everything you need to know about fishing in Sea of Thieves!

Get ready with your rod 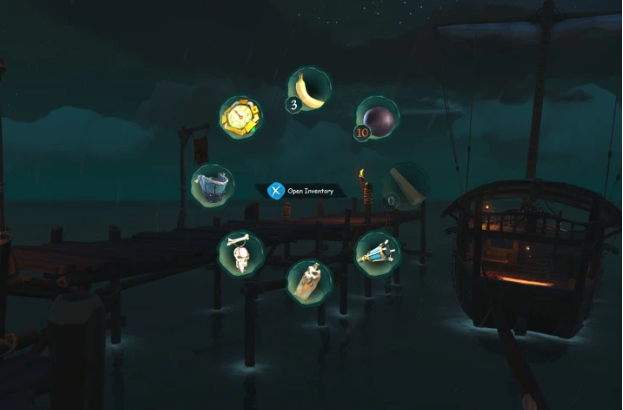 Since the fishing rod was implemented into Sea of Thieves after a number of significant game updates were released, all players who have the most recent version of the game should always have access to it. Open the radial menu by pressing the LB button on the Xbox controller (the Q button on the PC, unless you remapped), and then navigate to the second radial wheel to view further pieces of equipment. This will allow you to access the rod. Your rod ought to be there, all set up and ready to use.

You can fish without bait (more on this below), but it will be much more difficult for you to catch fish, and there are some fish that you won’t be able to catch at all without the appropriate bait. There are three primary kinds of bait: earthworms, leeches, and grubs. Grubs are the most common. You should be able to locate them in any seaside barrel, and it is likely that you will acquire several of them while searching for goods in different barrels at your first seapost. If nothing more, they are frequently spotted merely digging into the sand along the shore or in the grasses that are close.

Open your radial item wheel when you have your fishing rod equipped, and select the option to attach your bait (Y on console, R on PC). Pick the kind of bait that most appeals to you. 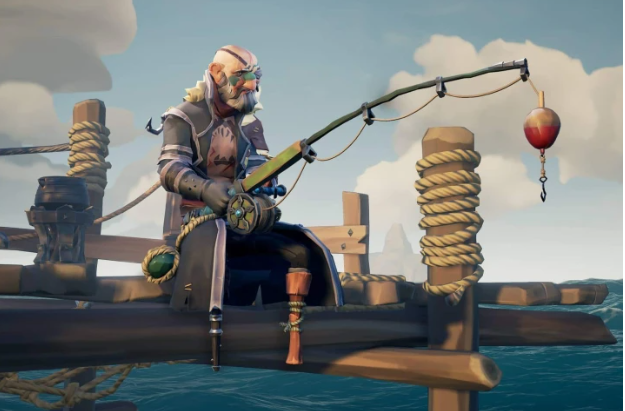 When you are just getting started fishing, it doesn’t really matter where you choose to cast your line, so you are free to do it from wherever you like on your ship. Although any dock or pond will do, as your experience level increases, you will want to hunt for certain ponds and areas where rarer fish live. At the appropriate location, you can cast your line by pressing RT on the Xbox controller or LMB on the PC. 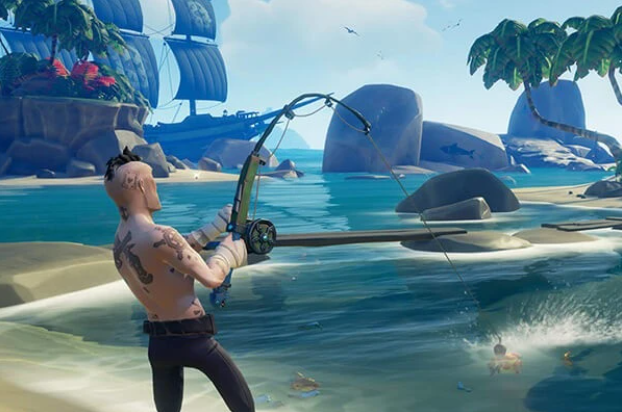 Maintain vigilance over your fishing line until you notice a fish approaching it and beginning to circle it. After a short period of time, the fish will attempt to bite your hook before attempting to swim away. Move your rod in the opposite direction that the fish is trying to flee in order to wear the fish out and make it easier to catch. If the fish is tugging in a straight forward direction, for example, you can counterbalance this by pushing the rod down. After some back and forth, the fish will eventually become tired, at which point you will be able to claim your prize.

Wait! If you intend to consume the fish and restore your health by doing so, you should first place it in the frying pan aboard your ship and prepare it for consumption. In the game, being sick from eating raw fish too rapidly can cause you to lose health and won’t give you as much of it back. Be careful not to let your fish sizzle for an excessive amount of time, or it will become charred. If you want to know when a fish flank is ready to eat, watch how its colour changes; you want it to become a lovely dark hue before you consume it.

Narrow down your catch 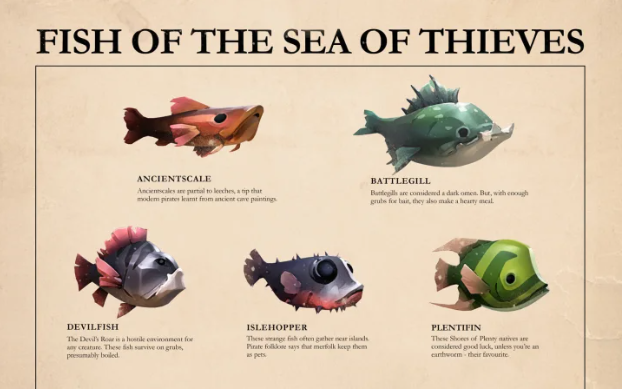 Try catching unusual fish if you’re a completist. Sea of Thieves contains 10 types of fish to collect, and each has five subspecies (50 fish varieties overall), including unusual ones that only appear at night or in certain locales. Master fishers should know around 10 key species. 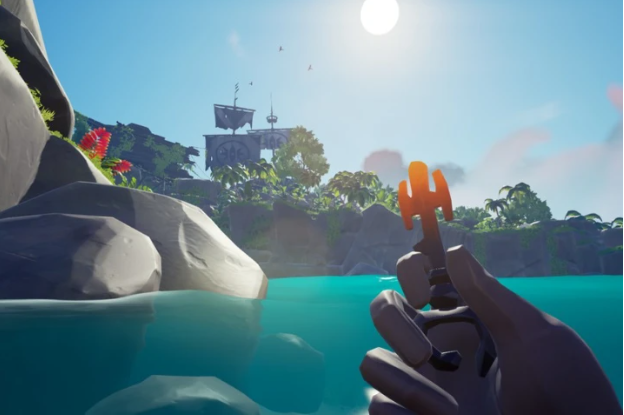 A fishing rod catches more than fish. Without bait, you can catch Treacherous Plunder. Most of the things are useless except for wood planks, however getting them all earns a commendation. One item, an Ashen Key, can open incredibly profitable Ashen Chests.

Find a calm island pond and fish without bait. If a fish is circling your rod, abort your cast and try again. If you haven’t caught any fish in a while, try reeling in your line.

Sell to a Trading Company 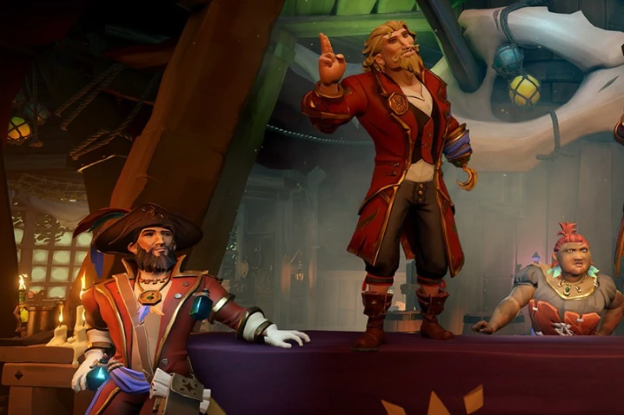 Not eating your catch immediately? You can sell it to a Trading Company rep at a sea station (stores called Spoils, Posts, Bazaars, etc). This earns Hunter’s Call rep and coins for new titles. If you’re selling fish for rep, you don’t have to boil it, but doing so will raise its gold value—unless you burn it.

Why can’t I catch fish in Sea of Thieves?

When fishing in Sea of Thieves, you won’t always be successful in catching fish. Fishing with a keyboard and mouse on a personal computer is very similar to fishing with a gamepad. The most notable distinction is that a line that could break does not provide the rumbling feedback that a keyboard and mouse do. The left click of the mouse is used on a personal computer to both cast out the line and slowly reel in the catch.

Is fishing in Sea of Thieves worth it?

Fishing is the most effective way to improve your reputation with the Hunter’s Call, a group of fishermen that can be located in various locations across the island in Sea of Thieves. Fishing is typically the most secure and quickest method for enhancing one’s reputation, despite the fact that they also purchase chicken, pork, shark, and even Kraken.

How do you pull a fishing rod?

Simply raise the fishing rod so that it is at an angle of about 45 degrees to the water, point it directly in the direction of the fish, and get ready to reel in the line as soon as the drag stops moving and buzzing. It is time to get to work on the fish as soon as they begin to slow down and stop pulling line off of your reel.

How do you catch a fish without a rod?

You can either make use of a real fishing hook, such as one with barbs, or you can improvise one using whatever materials are at your disposal. Attach it to a length of fishing line or an improvised line by tying it to either one. Paper clips, safety pins, sewing needles, and even the tabs from soda cans can be used to improvise a hook. There are many other things that can be used.

Should I cook fish before selling Sea of Thieves?

In Sea of Thieves, you can sell any fish you catch, but they have to be in their whole to do so. The fish cannot be eaten in increments of less than half, but if it is prepared, you will frequently be eligible for a larger prize. When the flesh of the fish begins to become white in the pan, this indicates that it is done cooking; at this point, you should take it off the heat.