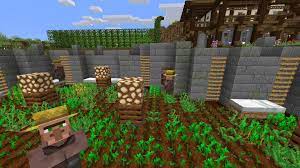 A multitude of unique resources can be found in Minecraft, and practically every single one of them may be farmed. While it is possible to gather goods and blocks by hand, automating the process makes the process less exhausting and more efficient.

With the use of redstone and game mechanics, players may construct farms that harvest a large amount of materials quickly and easily. Automated, semi-automatic, and manual farms are the three sorts of farms that may be found.

Manual farms are straightforward operations in which everything must be completed by hand. In semi-automatic farms, players can employ an auto clicker to reduce the amount of time spent doing repetitive tasks. Automatic farms are the most efficient since they allow Minecrafters to focus on other chores while the farm is running in the background.

Best farms to build in Minecraft

Dripstone is a new block that has been added to the game. These blocks have grown increasingly abundant in Caverns & Cliffs Part II as a result of the addition of dripstone caves to the area. Dripstone and pointed dripstones have distinct textures that make them excellent for use in construction.

Moss is yet another new block that may be found in large quantities in the most recent versions of Minecraft. Players can find moss blocks in lush caverns, as well as supply boxes in shipwrecks, which they can use to craft items.

Moss block has a unique function that allows it to transform neighbouring stone-type blocks into moss. When bone meal is applied on moss, it causes it to spread to nearby blocks.

After a lengthy period of time, the Overworld was granted access to a new resource known as copper. Fortunately, it is also capable of being cultivated automatically. When drowned, they have an 11 percent chance of dropping copper ingots if they are slain by another player.

If the player makes use of a Looting III weapon, the drop rate increases to 17 percent of the total. A zombie spawner may be used to create drowned, which can then be killed in order to obtain copper ingots.

Iron farms are fantastic no matter what version of the game you’re playing. There is an endless supply of iron ingots available from these farms. Iron is useful to all sorts of players in a variety of situations. It can be used to make a variety of products and may be exchanged for emeralds as well.

During the early stages of the game, players may frequently encounter a food scarcity. Building an automated food farm is strongly advised in order to prevent this situation. In Minecraft, you may build whatever type of food farm you want.

How to Play Fortnite on Your PC