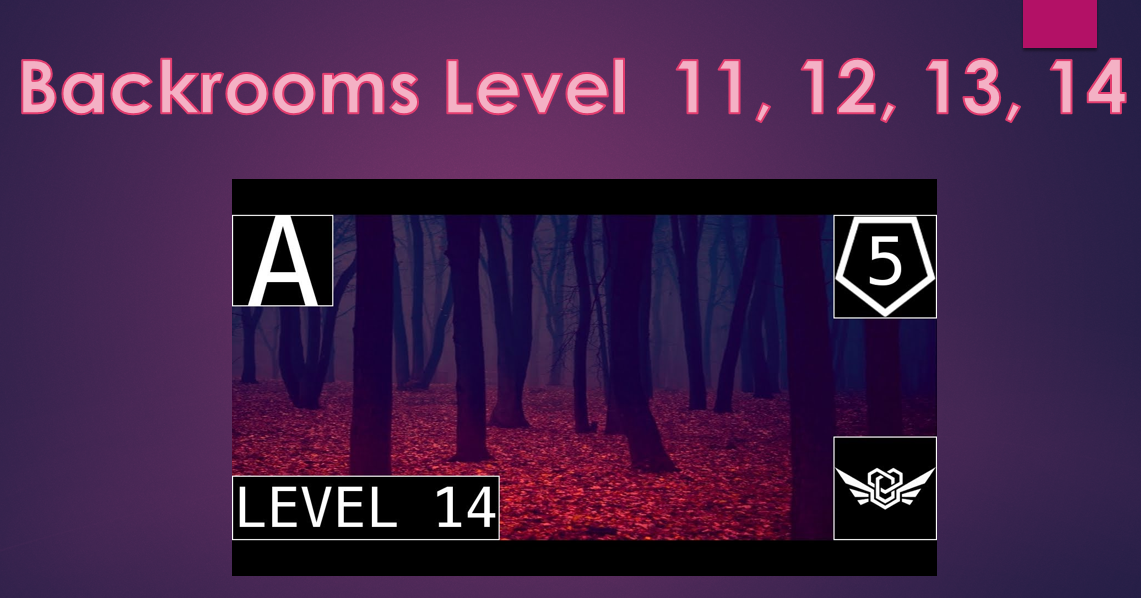 Although similar in size and layout to Level 9, the buildings on Level 11 are those more commonly found in the Frontrooms of large cities, such as office towers, apartment complexes, and the like, rather than middle-class suburban houses.

This level is full of long corridors and rooms with strange symbols on the walls. Be careful not to touch any of the symbols, as they will cause you to become disoriented and lost. If you do find yourself in one of these rooms, quickly retrace your steps and try to find your way back to a familiar area.

There are also a few dark rooms on this level, so be sure to bring a light source. at the end of this level, you will find a strange glowing door. Do not enter this door unless you are absolutely sure that you are ready to face what lies beyond.

This level is characterized by its complete lack of any sort of environmental features, save for a single, featureless door leading back to Level 11. The floor and walls are completely featureless as well, being made entirely out of a smooth white material. There are no lights on this level, nor any source of light; the only illumination comes from the occasional flash of lightning in the distance.

The level is inhabited by a single entity, known as the Beast. The Beast is a massive, wolf-like creature with glowing red eyes. It is incredibly fast and agile, and is capable of leaping great distances. It is also incredibly strong, and can easily kill a human with a single blow.

The Beast is the final obstacle between the survivors and their escape from The Backrooms. In order to reach the door leading back to Level 11, the survivors must first defeat The Beast. However, this is easier said than done, as The Beast is an incredibly difficult opponent. The survivors will need to use all of their skills and abilities in order to defeat it.

Once The Beast is defeated, the survivors can finally escape from The Backrooms. They will find themselves back on Level 11, where they can then make their way back to the real world.

The Backrooms Level 13 is a dark and mysterious place. It is said that this level is where the lost souls go. No one knows for sure what happens on this level, but it is said that it is a place of great suffering. There are no lights on this level, and the only sound is the screams of the damned. This level is said to be guarded by a creature known as the Beast. The Beast is said to be a large, black, furry creature that lurks in the shadows, waiting to devour any soul that dares to venture into its domain.

Those who have been lucky enough to escape Level 13 say that it is a place of endless darkness, where time has no meaning. They say that the only way to escape is to find the Beast and kill it. But no one knows for sure if this is even possible.

If you find yourself on Level 13, beware the Beast. And whatever you do, don’t let it catch you.

Backrooms Level 14, also known as “The Workshop”, is a location in the Backrooms.

The workshop is overseen by a group of entities known as the Engineers. These entities seem to be able to control the machines here, and they use them to create all sorts of objects and devices. The engineers are very intelligent, and they are always working on new projects.

The workshop is a very dangerous place, and it’s filled with all sorts of hazards. The machines here are very powerful, and they can easily injure or kill anyone who isn’t careful. There are also a lot of chemicals and other dangerous materials here, so it’s important to be careful what you touch.

The military hospital that once stood on Level 14 was built in the 1800s and has since been abandoned. The pipes are leaking and collecting bodily fluid-tainted water on the floor. Ceiling has deteriorated to the point where it’s no longer supported by walls.

If you’re not careful, the workshop can be a very dangerous place. But if you’re careful, it can be a great place to find new and interesting things. Just be sure to watch out for the engineers.