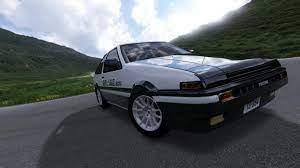 Forza Horizon 5, like its predecessors in the Forza series, provides the user with a vast selection of vehicles from which to pick. It is one of the games in the Forza series that features one of the largest car rosters, with over 400 cars and counting at this point. There isn’t one single explanation for why each car looks the way it does. There are a few vehicles in Forza Horizon 5 that have been included due to their exceptional performance in real life. Others are there because they think it will look good on them. And some are there to pay homage to cultural touchstones, such as the use of the DeLorean in Forza Horizon 5, which is one example.

In a similar vein, the racing anime Initial D helped bring worldwide recognition to the Toyota Trueno AE86 automobile, and Forza Horizon 5 has brought it back. Although it is one of the game’s more uncommon automobiles, there are several different ways to acquire it.

Read Also: How to Unlock All Houses in Forza Horizon 5

Earning the AE86 Through Wheelspins

Free Wheelspins will be awarded to the player as they progress through Forza Horizon 5’s many progression systems. These systems include things like expending skill points. Wheelspins and Super Wheelspins are a reward system similar to Gacha that can be earned in Forza. There are a variety of goodies available, including clothes and credits. The player has a chance to win a unique vehicle, such as an AE86, depending on how lucky they are.

Earning the AE86 Through the Auction House

Even if the players’ Wheelspins aren’t delivering them vehicles, they can still put the credits and other benefits that they earned to good use in the Auction House. This is true even if their Wheelspins aren’t giving them automobiles. Players in Forza Horizon 5 can compete with one another in the bidding process for automobiles by using the Auction House, which is a community component in the game. Players will have a better chance of stumbling into an AE86 auction if they check the website frequently. They should be aware that in order to get the vehicle, which is extremely rare, they will need to have a substantial amount of Forza Horizon 5’s credits saved up in advance.

Earning the AE86 Through the Series 1 Challenge

Because it is a live-service game, Forza Horizon 5 goes through timed events on a regular basis, during which players can earn points that can be used to unlock exotic cars. The most important competition is the Series 1 Spring Hot Season event, because the winner takes home an AE86. It starts on December 2 and continues for seven days until it concludes on December 9.

If the player is unable to attend this event, they should not feel as though they have failed completely. These events will be held on a consistent basis, thus it is very likely that the AE86 will make another appearance in the future at some time.

Earning the AE86 Through a Gift Drop

Although this is the least likely approach, players should nonetheless be on the lookout for it just in case it happens. In Forza Horizon 5, players are able to give their extra cars to other players, regardless of whether or not they know those people. Even if it is doubtful that someone may ship off one of their more unique automobiles, it is still a good idea to check.

How can I buy Trueno?

You will need to compete in either the Wheelspins or the Super Wheelspins in Forza Horizon 5 before you will be able to acquire the 1985 Toyota Trueno AE86. When you participate in these activities, among the many other amazing products and cars, you have the potential to randomly receive one of them.

The AE86 has cemented its position as a legendary automobile, mostly as a result of the acclaim it has garnered in the world of motorsports and popular culture. It is simple to understand why they continue to command a high price more than three decades after they were first driven on public roads since they have such a historic past. Kimiko Kidd is a native Daytonian.

Trueno for the Toyota Sprinter
The Toyota AE86 (Eight-Six, or Hachi-Roku) models are the most common type of vehicle shown in the Initial D series. The Toyota Sprinter Trueno, driven by Takumi Fujiwara and his father, Bunta, is perhaps the most recognisable example of this model.

What is the best drift car in Forza?

You probably already guessed that the Formula Drift #43 Toyota Supra MKIV would end up on top of our list; it is the vehicle that we consider to be the most capable drifter in Forza Horizon 5.