The taskbar icons in Windows 11 are centred, which is the most noticeable change to the appearance of Windows 11 in comparison to Windows 10. You won’t be able to carry Windows 11’s central Start menu over to Windows 10, but you can change where the icons on the taskbar are located to make it look more like Microsoft’s more recent design. Here are the steps:

Read Also: How to Turn Off Notifications on Windows 10

How to Center Taskbar Icons on Windows 10

The updated user interface for Windows 11 (which was originally seen in a leak prior to the operating system’s official launch in June 2021) has certain design elements in common with Windows 10X, most notably the centralized taskbar. Even though Microsoft has discontinued its dual-screened operating system, that does not mean that its design language cannot live on in other forms on personal computers.

After that, perform another right-click on the taskbar, move your mouse cursor to the “Toolbars” option, and then click on the “Links” option. After it has been chosen, a checkbox will automatically populate next to it.

Make sure that “Show text” and “Show title” are both checked by doing a third right-click on the taskbar and ensuring that both options are displayed.

You should now see “Links” on the right side of the taskbar, with two vertical lines to the left of it. This indicates that you have access to more links.

You can move “Links” to the left side of the taskbar by moving your mouse over the two vertical lines, clicking and dragging it, and then releasing it. It should align itself to the right of the Windows and Search icons automatically.

If you change the “Links” section of the taskbar, all of the icons that you have pinned to the taskbar will shift to the right side of the screen. You may click and drag your icons to the middle of your taskbar by using the two vertical lines that are located next to each icon. You’ll have to eyeball them because they won’t snap to the middle of the board. 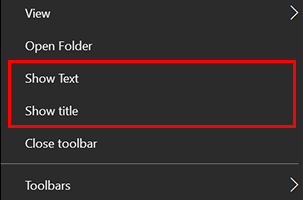 Next, give the taskbar a right-click and deselect the options to “Show text” and “Show title.” It appears that “Links” has been removed from the taskbar.

Click the taskbar one more time with the right mouse button, and then select “Lock the Taskbar” from the context menu.

Your computer running Windows 10 should now be free of the vertical lines that you used to drag “Links” and the pinned icons, and it should appear to be more similar to computers running Windows 11.

Why is my taskbar in the middle of the screen?

Make sure that the “Lock the taskbar” option is not selected by checking the box at the top of the Taskbar Settings window. Next, scroll all the way down until you reach the section labelled “Taskbar location on screen,” and then use the menu to select the one that best suits your needs: left, right, top, or bottom. After that, the taskbar ought to relocate itself to the side of the screen that you have selected.

How do I realign my taskbar?

How do I reset my taskbar settings?

To open the Task Manager, press the keyboard commands Ctrl + Shift + Esc on your keyboard. Under the tab labelled Processes, navigate through the list until you come to the Windows Explorer icon. You can restart this procedure either by selecting it, then clicking the Restart button located at the bottom of the window, or by right-clicking it and selecting the Restart option from the context menu.

Can I move my taskbar to the right in Windows 11?

The ability to reposition your taskbar is disabled in Windows 11 as of October 2021. (or even resize it). However, by utilising a hack that involves the Windows Registry, it is feasible to move the taskbar to the top of the screen while maintaining its functionality.

How to Clear System Data on iPhone

How To Lock Cells In Excel