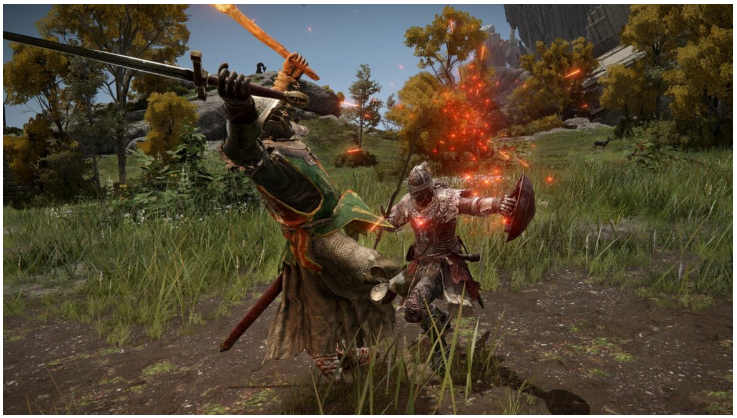 The Elden Ring provides players with a variety of options for dealing a critical strike to their foes. There are more ways to inflict critical damage on foes in Elden Ring than there are in any other game developed by FromSoftware. These include Guard Counters and Sleep Arrows. One strategy, known as “Parrying,” dates back to the beginning of the Souls series.

Read Also: How To Stop Madness Effect in Elden Ring

How To Parry in Elden Ring A skill known as parrying needs almost perfect timing in order to riposte an attack with a shield (or certain weapons), which leaves an opponent open to take damage from a critical hit. The “Parry” gameplay mechanic allows some of the strongest Souls players to dispatch of low-level foes as well as the most difficult bosses in the game with relative ease. In Elden Ring, parrying is performed in a manner that is quite similar to how it was in previous games, albeit with some constraints.

Parrying in Elden Ring vs Other FromSoftware Games Elden Ring’s parrying mechanics are almost exactly the same as those found in other games developed by FromSoftware. If you’ve played Dark Souls 3, you undoubtedly already have a solid grasp on how this particular gameplay concept operates. However, a significant distinction is that the ability to Parry is not necessarily inscribed on every shield in the game. This is a critical distinction.

The Ash of War system, which was introduced in Elden Ring, provides players with the ability to modify the special skills that come with each weapon. By applying an Ash of War to a shield, a player has the power to completely disable the Parry ability of their weapon. It’s safe to say that the most of the shields in the game have the capacity to parry, but that doesn’t mean it’s a given.

Perform A Parry In Elden Ring In Elden Ring, you can only parry enemy melee martial strikes if you have a shield equipped, and you can only parry them if they come from an adversary. You cannot parry an arrow that is being shot at you, nor can you parry spells or incantations that are being cast at you. However, if an attack is made with a weapon that makes physical contact with the player, then the player has the ability to parry almost any assault. When engaging a foe in melee combat, pay attention to the patterns they use to attack and resist the need to run away; instead, brace yourself for a test of your reflexes.

When an attack is about to land, quickly press the “Strong Attack” button that is located on the hand that is holding your shield (typically LT or L2). If you time your attack correctly, the enemy will lose control of their weapon, which will not only prevent any damage but also stun them. This enables you to approach closer to your opponent in order to score a Critical Hit, which is referred to as a Riposte in this context. Because parrying is such a tough action for most players to pull off, you should pay close attention to the movements of your opponents and have full faith in your own ability to parry.

Can you sword parry in Elden Ring?

The Elden Ring Parry Skill is a Normal Skill that can be found on the Dagger, Curved Sword, Thrusting Sword, Fist, Claw, Medium Shield, and Small Shield. These are the only weapons that can have it. It is also possible to utilise the Ash of War Parry ability to apply the skill to weapons of the same type.

Can you parry every attack in Elden Ring?

In Elden Ring, you can only parry enemy melee martial strikes if you have a shield equipped, and you can only parry them if they come from an adversary. You cannot parry an arrow that is being shot at you, nor can you parry spells or incantations that are being cast at you. However, if an attack is made with a weapon that makes physical contact with the player, then the player has the ability to parry almost any assault.

Can you parry Margit?

Yes, you can parry Margit. If you time your parry so that it occurs when Margit is doing a jab attack or slam attack with his melee weapon, you will easily be able to parry him. Because he cannot parry with his yellow sword, hammer, or knives, you should only use your parry against the strange-looking weapon that he is holding in his right hand.

Is parrying worth it in Elden Ring?

It is not a simple task to master, but the results are well worth the effort after you have mastered the timing. It’s probable that a lot of people are wondering whether or not it’s possible to parry bosses in Elden Ring. It is true that most of the bosses can be parried, and it will make all of the battles far simpler if you can learn how to parry each boss.

How to Get Apple TV on Sony Smart TV

How to Delete Apps on a Samsung Galaxy Phones