Apple computers are a popular choice for many people, thanks to their sleek design and easy-to-use interface. However, there may be times when you need to run an executable file on your Mac. This can be tricky, since Apple does not allow these files to run by default. In this article, we will show you how to run EXE files on a Mac using a special program that allows them to be executed. Follow these simple steps and you will be up and running in no time!

Read Also: How to Block Pop-Ups on a Mac

How to Run EXE Files on a Mac

How to Install Windows EXE Files on Mac With WineBottler

WineBottler is an additional choice that can be made in order to execute Windows EXE files on a Mac. WineBottler is a compatibility layer that transforms the calls that Windows applications make to the Windows Application Programming Interface (API) into portable operating system interface (POSIX) calls that macOS can use.

The catch is that it cannot be relied upon 100 percent of the time. Because WineBottler does not translate all Windows API calls in their entirety, running Windows apps may not always operate as intended or may not work at all. If you find that you occasionally need to run Windows software on your Mac, this is another alternative that you could find beneficial.

1. You can get the version of WineBottler that is compatible with your macOS installation by going to the homepage for WineBottler and downloading it there.

2. To start the installation process, double-click the file that you downloaded and then drag Wine and WineBottler into the Applications folder on your computer. It’s possible that the installation will be finished after a couple of minutes have passed. 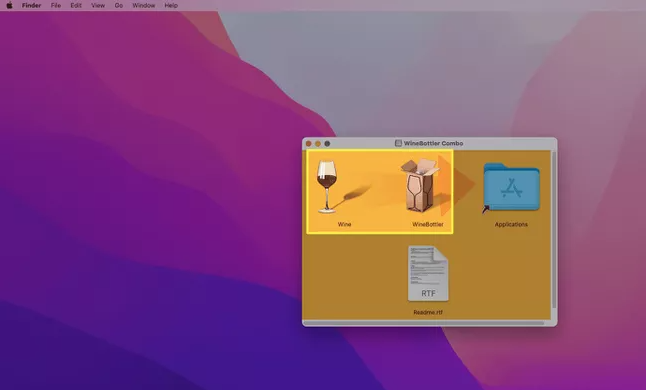 3. After the file has been successfully installed, you will be able to access the EXE file by using Finder. Then, bring up the drop-down menu by right-clicking the file in question.

4. Make sure to select Open With.

6. You will see a pop-up box that asks you to select the application that you would like to use to run the file. Choose to execute the command directly in [address].

If your file does not start loading, Wine most likely does not support it; thus, you will need to make use of the Boot Camp option that was described at the beginning of this article in order to open it (if your Mac can use Boot Camp).

Wine is a compatibility layer that is developed using open-source software. It makes it possible for apps, games, and software developed for Microsoft Windows to run on computers running macOS. This is an abbreviation that stands for “Wine Is Not an Emulator,” which is the meaning behind the name. In order for Apple computers to function properly, it recreates the directory structures that are utilised by Microsoft within its operating system. exe files

How do I run EXE files on Catalina?

You have the option of installing Windows programmes from the in-app library of CrossOver, or you can use CrossOver to run EXE files that you have acquired from a source that is not affiliated with CrossOver. To install CrossOver, select Open With from the context menu of the EXE file, and then select CrossOver from the list that appears.

How can we open .EXE file?

In Windows, you can directly open EXE files by double-clicking on them. This method is used the vast majority of the time. To get started, hit the Start button on your keyboard and then choose the “Search” feature. Windows will show you a selection of available executable files after you type the name of the EXE file you wish to open into the search box. To open the EXE file, simply double-click on the file’s name.

Can you convert Windows files to Mac?

Launch the Migration Assistant application, which may be found in the Applications folder’s Utilities folder. Follow the instructions that appear on the screen until you are prompted to choose how you would like to transfer your information. Click the Continue button after selecting the option to perform the transfer from a Windows-based computer. Click the icon that corresponds to your personal computer, then select Continue.

Is Wine safe to use on Mac?

Wine by itself functions correctly on the MacBook; but, when I tried to run any Windows programme, especially games, it did not operate properly all the way through.

What is the executable file extension for Mac?

The Mach-O file format is the native format for executable files used by macOS.

How to Delete Apps on Mac That Won’t Delete

How to Mute Messages on a Mac