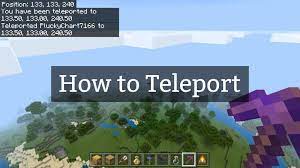 Minecraft worlds may be quite large. Even in the most basic version of the game, a new world extends for around 30 million blocks in each cardinal direction — and this is without taking into account locations such as the Nether or the End.

This implies that even if you’re a lightning-fast runner, going from one location to another might take an eternity. Fortunately, there are certain shortcuts.

Teleportation is possible in both the Java and Bedrock versions of Minecraft, and you may use command codes to transport yourself or another player practically anywhere. Here’s how to do it.

Read Also: How to Get Command Blocks in Minecraft

How to Teleport in Minecraft

It is necessary to allow cheats in your Minecraft world before you can teleport about. There are two methods for enabling cheats depending on whether you’re creating a new world or playing in one that you’ve previously built, and both are straightforward. For further information, please see our page on how to activate cheats in the game.

Once you’ve enabled cheats, you may access the chat menu by pressing T on your keyboard or the right D-pad button on your controller. After that, type /tp.

At this point, you have a few of distinct alternatives to consider. Using XYZ coordinates is the most efficient and straightforward method of teleportation.

Each and every place in Minecraft has its own set of XYZ coordinates. To find them in the Java edition, hit the F3 key on your keyboard (or Fn + F3 if you’re using a laptop) for a few seconds. During a gaming session in Bedrock, press the Settings button and then the Show Coordinates option in the Game Settings menu.

You may teleport to any location as long as you know the coordinates of that location. To do so, run the following command into your console: /tp X Y Z. To teleport to the position 70, 70, 70, for example, you would type: /tp 70 70 70 in order to do so.

Using the tilde key () will take you in the direction you want to travel even if you’re not sure precisely where you want to go. Typing /tp 70 70 70 will warp you 70 blocks east, 70 blocks into the air, and 70 blocks south of where you’re presently standing, depending on your location. Adding a negative sign before the number will allow you to travel in the other direction (west, down, or north).

You have the ability to transport other players as well. Simply write their username before the coordinates — for example, if you’re attempting to teleport a player called JohnDoe, you’d type: /tp JohnDoe 70 70 70 — and the teleport will be successful. And if all you want is to teleport yourself to JohnDoe (or any other player), all you have to do is write /tp JohnDoe in the console.

However, if you aren’t cautious, you may find yourself teleported to solid ground, which is dangerous. You will perish in a matter of seconds if you do this since your character will begin to take tremendous damage. Add the word true after your cheat code to prevent this from happening. This will cause the game to check if there are any blocks at the area you’re trying to warp to and cancel the teleport if any are found.

Here are some other quick teleport commands:

How to teleport to The Nether and The End

Every game of Minecraft begins with you in the Overworld, which is the realm where you’ll spend the most of your time exploring and doing tasks. Obtaining unique materials to go to the game’s two other dimensions — The Nether and The End — is frequently required.

You can travel between dimensions in seconds in Minecraft: Java Edition, on the other hand. This will be accomplished by combining the teleport trick with a new command: “/execute.”

For example, to transfer oneself to a different dimension, open up the chat box and write the following command: /execute in DimensionName run to PlayerName 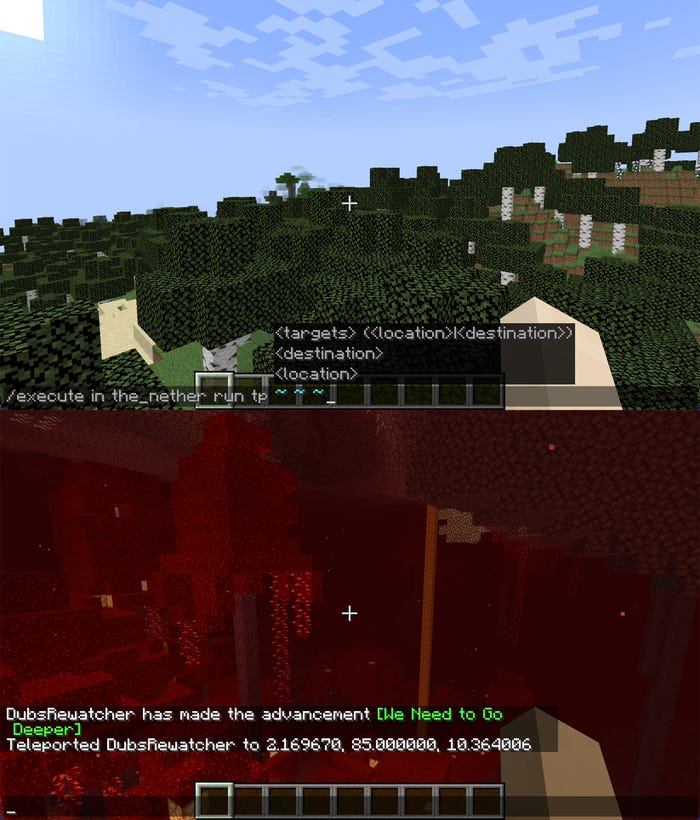 Keep in mind that the Nether and The End have vastly different layouts from the Overworld, making it simple to teleport oneself directly into lava, a mountain range, or a bottomless pit if you choose the wrong locations. As a result, while switching dimensions, the “true” command does not function as intended.

One of the most effective strategies is to move between dimensions normally initially, then jot down some safe coordinates that may be used later.