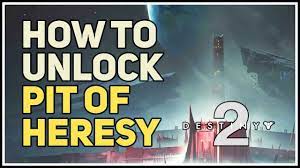 The Pit of Heresy is the only dungeon in Destiny 2 that requires players to meet certain requirements before they can complete it, including understanding how to access it. Located on the Moon, The Pit of Heresy is a dungeon that is a component of the Shadowkeep expansion. Completing it grants access to powerful equipment that can only be obtained through participation in the campaign and activities on the Moon.

A few weapons and armour that were connected to the Shadowkeep expansion began to become available during Season of the Chosen, thanks to Bungie’s effort to un-sunset them. While Destiny 2’s Season of the Splicer was in full swing, all of the Moon gear had been updated with new perks and stats that were not previously available. These gear components can be obtained through a variety of activities such as Altars of Sorrow and Essence Quests; however, these weapons with unique rolls can only be obtained through the Pit of Heresy. In addition, the Pit of Heresy is the only location where the Premonition Pulse Rifle may be acquired.

As a start, purchasing the Shadowkeep expansion in Destiny 2 is the sole means of gaining access to the Pit of Heresy. This implies that without it, you will be unable to unlock or acquire any of the weaponry linked with it, such as the Exotic Machine Gun Xenophase. Additionally, individuals who have begun the quest for Xenophage will be need to unlock the Pit of Heresy in order to complete it successfully. It’s a shame, because the process of uncovering the Pit of Heresy is related to the overall campaign of Shadowkeep.

How To Unlock The Pit Of Heresy In Destiny 2

The Deeping Wake quest can be obtained after the events of Shadowkeep have concluded. Speak with Eris Morn to obtain it. Take a trip to the harbour of Sorrow and take part in the Altars of Sorrow activity. Return to Eris Morn once you’ve defeated 20 Nightmare opponents and earned a Tier III (or above) award for your efforts. The Tier III or above prize must be accepted, and it will only be issued if the activity has been successfully completed. In other words, anyone undertaking this action will be required to remain until the activity is either deemed unsuccessful or finished at Tier VII.

Return to Eris Morn in order to accomplish this Destiny 2 quest, and the Pit of Heresy action will be available on the Moon near the Sorrow’s Harbor fast travel point once the task is completed there. There are various puzzles to solve in the Pit of Heresy, all of them lead up to a final boss battle. The encounters will concentrate upon the use of Hive Swords, beating minibosses, and solving puzzles through interpreting symbols (similar to those that are deciphered in the Moon’s Lost Sectors), as will many of the Hive-related activities. Complete the Pit of Heresy dungeon on your own without dying to complete the “Savior of the Deep” Triumph requirement and earn the Shadowkeep banner in the process.

How to Pit Of Heresy Rewards In Destiny 2

Each Pit of Heresy mission will reward players with an exotic weapon, a ship, and other cosmetics that they can use in the game after they have completed the quest line successfully. For starters, the “Altars of Sorrow” and Moon essence quests will grant players access to every weapon and armour in the game. This dungeon also has a Premonition Pulse Rifle, which may be obtained by players.

The exotic machine pistol Xenophage from Destiny 2 can also be obtained as a prize for completing the “The Journey” questline. This exotic weapon, on the other hand, may only be obtained once players trigger and successfully finish a hidden encounter.

In addition, players will have a chance to receive the Bane of Tyrants ship as a drop after the final confrontation. Players who have already acquired their weekly prize from this particular dungeon will still be able to get their hands on the ship during this encounter. Finally, by achieving the Triumphs associated with this dungeon, players will be able to obtain the Sanguine Static and Crimson Echoes Emblems.

How to Fix It When You Can’t Connect to Steam

Here is How to Add Bitmoji to Your iPhone Keyboard