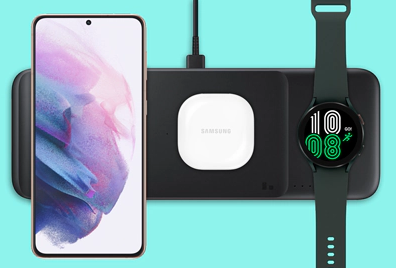 During the course of the past few months, there have been a number of rumours and leaks concerning a new accessory that Samsung has been working on. In a few different certification listings, the wireless charging station was referred to as SmartThings and was listed with the product number EP-P9500.

During the review process, the regulatory agency will carry out a number of processes, and the following photo will represent one of the test setups that will be used as part of that evaluation process. The SmartThings charging pad has been fastened to a test bench, and in the accompanying photograph, we can make out various radiation patterns along the three axes of geometry.

Unfortunately, the test setting conceals the majority of the information, and as a result, there is very little to learn about the functionality and design of the product. On the other hand, the SmartThings wireless charging system appears to have the shape of a rectangle with rounded sides and a rather substantial grey frame. It also appears to have a rounded back. If you look closely, you may be able to make out a slight ridge in the middle of the gadget. This ridge most likely indicates that one section of the front is a bit higher than the other. Both the front and the rear appear to be composed of a glossy black material.

Even if there isn’t much to work with in this photo, there is at least some indication of how this thing will seem in the future. Another piece of information that can be gleaned from the model number is the fact that Samsung’s wireless chargers all bear the EP signature, leading us to believe that this product is in fact one of those that the company manufactures. According to the FCC listing, it supports Zigbee, Bluetooth LE, and Wi-Fi in addition to wireless power transfer. Additionally, it has these capabilities.

Because a wireless charger does not typically require Wi-Fi or Bluetooth connectivity, it is possible that this product possesses certain other characteristics that are not found on other similar products. These features may have something to do with Samsung’s work in the field of smart home technology. It would be convenient to receive real-time input on your smartphone on the charging status of your smart devices, but there may be more to the story.