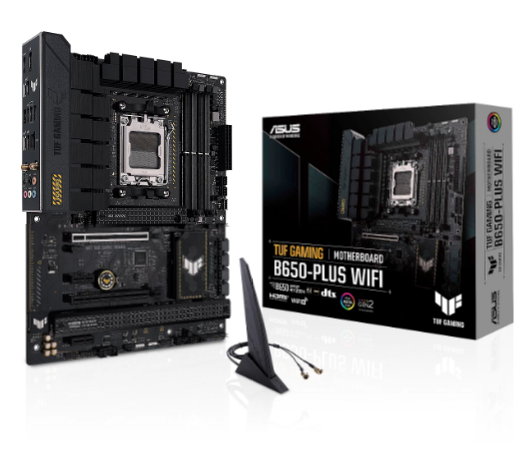 ASUS’s B650 series motherboards are available at a lower price than X670 models. We take a look at the TUF Gaming B650-PLUS WIFI series, which features three M2 slots (1x PCIe Gen5), a 2.5 GigE connector, WIFI6, and a robust VRM layout. Gamers can choose from a wide variety of options, like the ASUS TUF Gaming B650-Plus WiFi motherboard, when they shop online or in a store. It’s built on the affordable AMD B650 chipset, yet it delivers a tonne of features designed for gamers, a sleek design, and powerful components despite its low price.

The LGA 1718 socket on the B650 motherboard means it’s compatible with every model in AMD’s Ryzen 7000 Desktop CPU family. Naturally, the new AM5 socket will be implemented on B650 and B650E motherboards. The B650 and B650E platforms will include the lowest-priced motherboards for AMD’s Ryzen 7000 processors. The X670 and X670E platforms are more expensive than their predecessors. In the long run, the B650/B650E should be the better option. Although these less expensive options may have less features than AM5, they should still be able to fulfil many of the same functions. PCI Express 5.0 compatibility and double data rate (DDR5) memory are just two of the new features. The X670 and X670E are clearly differentiated from one another, with the latter promising PCIe 5.0 for both graphics card slots and the NVMe slot. Differentiating between the B650 and B650E and the X670 is not particularly difficult; the X670 and X670E each have two physical chips, while the B650 series only has one. Therefore, the amount of onboard I/O on motherboards of the B650 class will be halved.

The CPU socket on the motherboard is powered by a 6+8-pin connector, and the VRM supplies 60 amps to the processor across 12+2 phases. The CPU is supplied with electricity via two standard 8+4 EPS power connectors. Heatsinks on the motherboard are dark and located above the power supply, effectively cooling the motherboard’s electronics. The board has four DDR5 DIMM ports for system memory, and it may be overclocked via the EXPO standard. A thermal heat sink in the same brushed dark colour as the rest of the motherboard covers each of the three 2280 M.2 slots. The one that is compatible with PCIe Gen 5.0 is that one. A dark colour scheme with raised product details decorates the PCH heatsink. The board also includes four SATA III ports. Multiple USB 3.2 Gen 2 ports (20 Gbps), HDMI, Display-Port, a 2.5G Ethernet port based on Realtek’s 8125, and a total of seven audio jacks are located on the device’s rear panel. We’ll put a Ryzen 7 7700X on this B650 motherboard and see how she does. Are you curious as to how it functions in practise? If you’re interested in finding out more about the ASUS TUF Gaming B650-Plus WiFi, you’ve come to the right place.

According to Kuo, Apple will release a new iPad mini with an upgraded chip in 2023 or early 2024

As of Windows 11, Microsoft’s Notepad software appears to be getting tabs