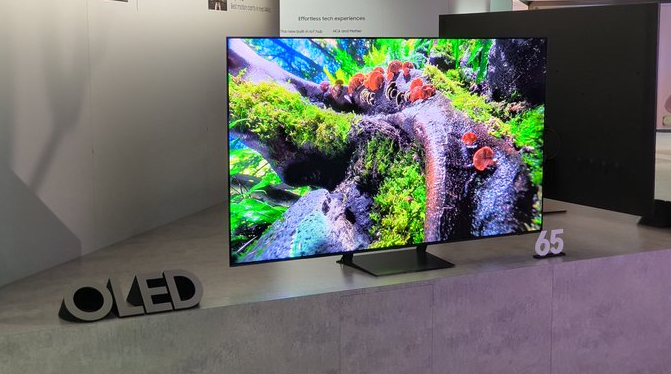 The previous year, Samsung made its debut in the market for OLED televisions with the production of the S95B QD-OLED model. This TV incorporated the most advantageous aspects of both Quantum Dot and OLED displays into a single product. A year later, at CES 2023, Samsung unveiled two QD-OLED sequels, suitably titled S95C and S90C, which offer several significant advancements to the series. These models are named after their previous iterations.

We are now on the show floor of CES, and we had the opportunity to have a hands-on demonstration of the brand new S95C and S90C QD-OLED TVs. This experience is being communicated to you in a brand-new hands-on film, which you can view down below. What follows is a taste of what lies ahead for you. The introduction of a larger 77-inch model represents the first significant update to be made to Samsung’s QD-OLED TV product range. Actually, there will be two of them, to be more specific, because the S95C and the S90C will both be offered in sizes that are comparable to one another, including 55, 65, and 77 inches.

The second is that Samsung has included a second model, which they have referred to as the S90C, which they appear to have built with the intention of making QD-OLED technology accessible to a greater number of users. To put it another way, and without giving away too many facts, the S90C is designed to be a more cheap alternative to the S95C, while also featuring similar high-end features. Samsung has not disclosed too many of these details.

At CES 2023, Samsung claimed that both the S95C and the S90C have a resolution of 4K Ultra High Definition (UHD) as well as a refresh rate of 144 hertz (Hz). Unofficially, the S95B model that was released the year before is capable of 144Hz with the use of overclocking, but technically, these televisions are the first Samsung QD-OLED televisions to support 144Hz. Although Samsung asserts that the S95C has a response time of 0.1 milliseconds and that it is certified by AMD Freesync Premium Pro, it is not apparent whether or not the S90C possesses these qualities. In a similar manner, the S95C has received certification from Pantone for both its colour and skin tone accuracy.

OTS Plus Sound and support for the Samsung One Connect box are two of the characteristics that set the S95C distinct from its less expensive counterpart, the S90C. The S90C is advertised as having a lower price point. The latter feature is not available on the S90C model, and it only comes with OTS Lite rather than OTS Plus. However, we were told that the new QD-OLEDs use the same Quantum Processor 4K as the 2022 model. This is despite the fact that performance should have increased as a result of better optimization.