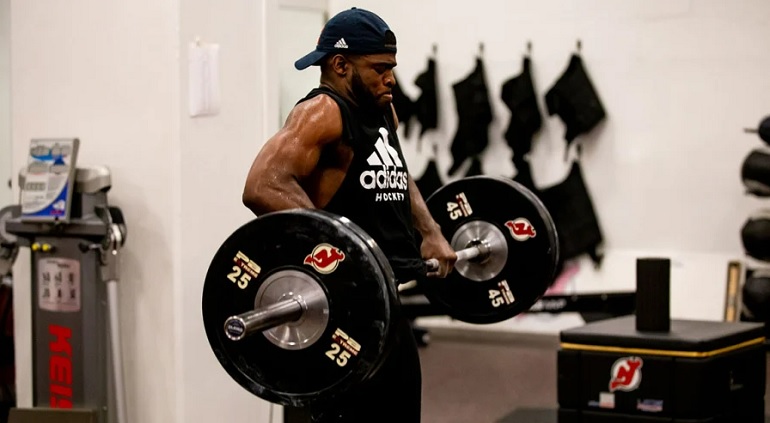 Professional ice hockey players need to be incredibly fit and strong, but they don’t need exactly the same type of fitness training as in other sports.

What are some of the key fitness tips to help you get into shape like an NHL player?

There is no need to focus on speed over long distances when playing hockey. The NHL rules state that the rink should be 200 feet long by 85 feet wide with a radius of 28 feet in the rounded corners. In most games, hockey players won’t get up to full speed, but they need to be able to move explosively over shorter distances.

This means that they need to work on sprints over five and ten yards. Who are the fastest sprinters to ever star in the NHL? Among them, we can see players like Peter Bondra, who won the NHL’s Fastest Skater competition on two occasions with the best time of 13.610. In 2022, Jordan Kyrou won the event with a sensational lap time of 13.55 seconds.

Aim to Be Stronger

Strength is crucial for athletes in most contact sports, and it’s especially important in ice hockey. NHL players use circuit training routines to improve their upper body strength. Leg presses, lunges, and squats are among the exercises that they use to get more powerful legs.

Players also need to have the strength and resistance to withstand hard hits without injury. A look back over some of the toughest hockey players of the past reveals names like Gordie Howe and Rob Blake. Even a player like Wayne Gretzky, who relied on supreme technique and intelligence, trained hard to be strong and resilient.

Flexibility is a huge area in hockey. By being highly flexible, NHL players can move smoothly, skate in a low position around the rink, and react to what goes on around them. For this reason, stretching is a vital part of their training regimes. Static stretching and dynamic stretching are the two different approaches that they use.

To be a successful hockey player, you need to get a good range of motion and be able to get into all of the necessary positions without any problems. Stretching, reaching, and rotating are all used to help improve the flexibility of the hamstrings, hip flexor, and glute muscles.

Good core strength is another attribute needed in any type of sport. Yet, for NHL players it isn’t about carrying out endless crunches and sit-ups to get rock-hard abs. Instead, they need to be able to skate as strongly as possible, put all of their weight into a shot and protect the puck from rival players who want to knock them off it. Core strength helps to link all of the body parts and carry out hockey moves efficiently.

Exercises like overhead squats and standing twists are among the most common for NHL players, from teams among the favorites in the betting odds (click here to learn more). They use isometric “anti-movement” exercises, where the core remains firm and other parts of the body move. These include the deadbug, the pall of press, and the plank. All these workouts help the players to create a solid, stable core for the unique challenges of playing hockey.

We’ve already looked at important elements like strength and explosive speed, but the need for power in ice hockey means that it’s worth looking at in its own section too. This area covers anaerobic exercises specific to hockey, as well as general power exercises. Without power, an NHL player isn’t going to be able to use the other skills they have.

Box jumps and barbell exercises are key parts of this routine. It’s a fairly demanding part of the training regime for an NHL player, so they will often concentrate on it more during a short period of the offseason. The fact that playing hockey is about short bursts of maximum intensity means that players like to mimic this in their training as much as possible.

Like any other demanding sport, the pros know how important their diet is to their performance. In general terms, they want to get lean proteins to help with repairing their muscles, and carbohydrates at the right time to give them energy when they most need it. Lots of fresh fruit and vegetables are also important for keeping up their fitness levels.

This interview with Taylor Hall revealed that he tries to get a lot of carbs and protein, with a lot of vegetables too. However, he said that he stays away from sweets and fruit. During the offseason, he’ll add some cheeseburgers or pizza to his diet as a treat but he says that he has found that there is no specific type of food that helps him perform during the season.

Esports Events of the Year That Are Not To Be Missed

5 Tips to Improve as a Sports Bettor