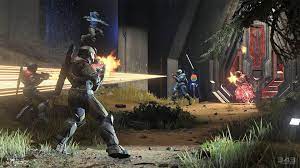 There is a single-player campaign available in Halo Infinite, in addition to a multiplayer mode that can be played with friends or with other fans online. In the latest instalment of the Halo franchise, which was developed by 343 Industries, the traditional Kill/Death ratio number that is used in most online shooters has been switched out for KDA.

Because this is not a conventional number for the series’ multiplayer mode, it is possible that some players will be unfamiliar with what the abbreviation stands for. This article will explain in detail what the KDA stat is in Halo Infinite, how it is calculated, where players can find it in the game’s settings, and how to view the standard KD metric.

How to Calculate KDA in Halo Infinite In Halo 5: Guardians, the KDA is determined using the formula “Kills + Assists/3) – Deaths.” In Halo 5, this formula is also used. Therefore, the value of an assist is equal to 0.333 of a standard kill. To recall how to calculate KDA, it is easier to split the total number of assists by three, add that number to the kill count, and then subtract the total number of player deaths. For instance, a KDA of 7 would be calculated based on 10 kills, 6 assists, and 5 deaths.

The method takes into account every conceivable type of kill, even unusual ones like achieving a kill with the use of a threat sensor in Halo Infinite. Player suicides will also be counted as player deaths, which is something that might happen frequently on multiplayer maps that have steep falls.

How to Check KD in Halo Infinite

Players who are interested in viewing the more conventional KD number should visit a third-party website such as HaloTracker. This website is not affiliated with 343 Industries, but it can provide players with even more information regarding their multiplayer Spartan. For example, it can tell players their win rate, how much damage they take on average, and how many headshots they have made in total over the course of their time spent playing online. This data can also be filtered based on the type of match being made.

It is also possible to view the statistics of other players, provided that the Gamertag of that person is known. This can assist in confirming claims such as the one made by the Halo Infinite player who won 100 free-for-all matches in a row. It can also help average players have a better understanding of how excellent the pros actually are.

What is KDA ratio Halo Infinite?

At the conclusion of each match, Halo Infinite also displays something that is referred to as a KDA ratio. More specifically, this is the ratio of your kills, deaths, and assists. This feature, which is related, has been the source of some misunderstanding.

What is average KDA Halo?

What exactly does “KDA” stand for in the Halo Infinite multiplayer? According to the standard kill-to-death ratio calculation, someone who has 24 kills and 12 deaths will have a ratio of 2.0.

What is a good KDA?

Is Platinum good in Halo Infinite?

According to Halo Tracker, the rating that is considered to be “average” in Halo Infinite is really the Platinum level. Approximately one-third of all players who participate in competitive multiplayer in Halo Infinite are ranked at this level.

How to Beat Survivor.io Chapter 1