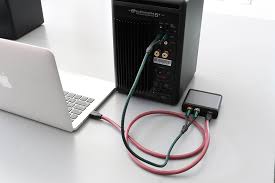 Setting up a home stereo system may be difficult, especially when wiring speaker cables to and from an audio receiver is involved. In this post, we’ll go through how to correctly connect amplifiers and receivers by matching up the terminals and wiring on the devices.

What are Speaker Terminals

Most stereo receivers, amplifiers, and conventional speakers include terminals on the rear that are used to attach speaker wires to the device. Either the spring clip or the binding post style terminals are used for this application.

These terminals are nearly always color-coded to make them easier to distinguish: the positive terminal (+) is normally red, while the negative terminal (-) is usually black. It is important to note that certain speakers are bi-wire enabled, which means that the red and black terminals are provided in pairs for a total of four connections.

What are Speaker Wire

On either end of a basic speaker wire, there are simply two parts: a positive (+) and a negative (-). (-). Even though there are only two pieces, there is still a 50-50 possibility of making a mistake with these connections if you aren’t paying attention to the details. Because switching the positive and negative signals can have a significant impact on system performance, it’s important to take the time to double-check that these cables are properly connected before turning on the system and testing the speakers.

While the terminals on the rear of stereo equipment are usually easy to identify, the same cannot be true for the speaker wires that connect to the equipment. Because the labelling isn’t always evident, this is frequently the point at which misunderstanding arises.

If the speaker wire is transparent or translucent, look for printed marks on the wire itself. To show polarity, you should see either positive (+) or negative (-) symbols, as well as words, at various places. It is possible that this labelling will be difficult to read or recognise; in this case, use tape to label the ends after you have determined which is which for easier identification later on. If you’re ever in doubt and need to double-check your speaker wire connection, an AA or AAA battery may be used to fast examine the connection. 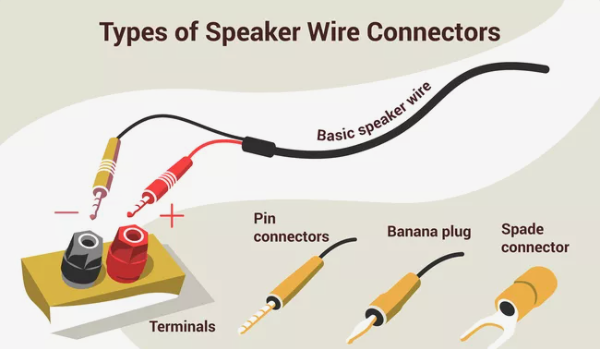 Speaker wires are most typically bare, which means you’ll need to use a wire stripper to expose the strands at the ends of the wires before you can connect them. Make sure you carefully twist the bare wire strands together so that they stay together as a tidy single twisted wire, regardless of whether your equipment employs spring clips or binding posts.

You may also buy speaker wire that comes with its own connectors, which can make connections easier and help you determine polarity more quickly if the connectors are color-coded. In addition, if you don’t want to muck about with naked wires, you may install your own connectors yourself. If you want to upgrade the tips of your speaker cables, you may purchase connectors separately. Pin connections are only used with spring clip terminals and no other connectors. These pins are sturdy and easy to push into the holes in the fabric.

How to Connect Receivers or Amplifiers

When done correctly, speakers are considered to be “in phase,” which indicates that both speakers are working in the same way at the same time, rather than in opposite directions. But if one of these connections is reversed (that is, if the link goes from positive to negative instead of the other way around), the speakers are regarded to be “out of phase.” This circumstance has the potential to result in major sound quality issues. It is possible that no components are damaged, yet you will most likely notice a difference in the output, such as:

Of course, there are a variety of other factors that might contribute to similar sound difficulties, but misaligning the speaker phase is one of the most typical mistakes made while setting up a stereo system. Unfortunately, the Speaker phase setup is easy to ignore, especially if you’re dealing with a tangle of audio and video connections in your work environment.

How to Build a Gaming PC

How To Shift Lock on Roblox