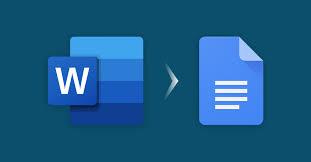 People are increasingly turning to free web-based word processing applications such as Google Docs rather than the once-ubiquitous Microsoft Word, which was once the standard word processing programme used by both students and professionals. It is simple to understand why Google Docs has become so widespread given that it enables several users to work together on a same document.

There are still a lot of people and businesses who use Microsoft Word, but connecting the application with Google Docs is not only extremely simple, but it’s also pretty much automatic. In the event that you need to convert a document that was created in Microsoft Word into the format used by Google Docs, doing so is a simple and quick process. Here’s how to do it on desktop.

Read Also: How to Check the Word Count on Google Docs on Desktop

2. To create a new document, go to the menu bar on the left and pick New. Next, select File upload. 3. Double-clicking on the Word document that you wish to upload to Google Drive will open it after you have located it on your computer. 4. Click the folder icon that is found next to the file name in the box that allows you to upload files in order to locate the Word document that you want to upload within your Google Drive. This will allow you to upload the document.

5. Simply double-click on the docx file for it to be opened.

6. The file will be immediately transformed into a format that can be opened in Google Docs if you submit it to Google Drive. Is Google Docs compatible with Word?

You may use Google Docs to open and edit documents that were created in Microsoft Word. You even have the option to download your Google doc as a Word document, resulting in the file having the conventional Word extension (. docx). However, that is not the only file format that you will be able to export from Google Docs.

Why does Google Docs change formatting?

In the event that you have been experiencing difficulties with the formatting of text in Google Docs, you are not alone. This problem has been brought up in a number of different places by a number of different individuals, including myself, and I’ve been experiencing it myself. It has come to our attention that this issue is being brought about by a clash between page script blocking extensions and ad blockers.

You can get a free trial of Google Workspace if you sign up for it. With the Google Docs app for Android, you are able to create, view, and edit Google documents in addition to ones created in Microsoft Word®.