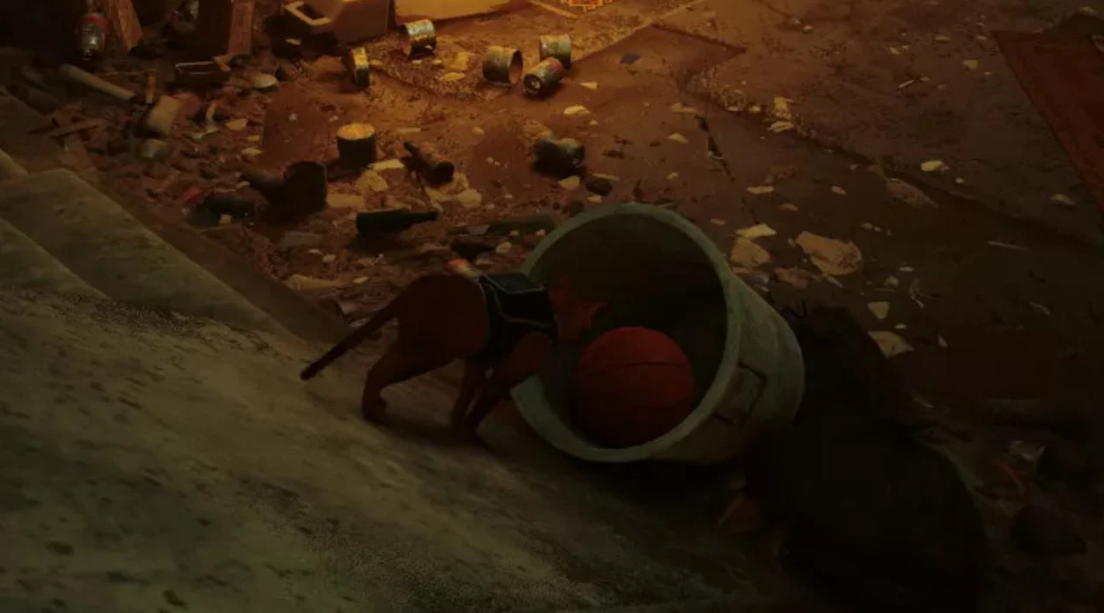 Putting the ball in the hoop after dribbling a basketball is a very pleasant experience. In Stray, the “Boom Chat Kalaka” award is both enjoyable and simple to obtain early on in the game. You are going to learn how to dunk the basketball in Stray by reading this post. So let’s get started:

This trophy may be found in “The Slums” prior to entering the sewers, and it is not hard to find at all. Stray players will see what appears to be an obvious opportunity for a trophy, as a basketball will be resting on top of a set of stairs perfectly in line with the opening of a trash bucket on the bottom set of stairs. This will give the impression that there is a clear opportunity for a player to win a trophy. You must first locate the Guardian who is standing in front of the sanctuary in order to proceed to this destination. It shouldn’t be too difficult to find this site, considering that it serves as the central core of The Slums.

When players are confronted by the Guardian, they should turn to the right in order to locate the basketball. The players will need to approach the basketball in a deliberate manner while walking straight through the middle of the stone towards it and gently nudging it forward. Players who also own cats will finally understand the sense of accomplishment a cat might have when he or she successfully knocks something over a certain kind of edge. The basketball needs to roll in a perfectly straight line until it reaches the bucket that is waiting below. Following that, the prize should appear automatically. Simple as pie and as easy as catnip, please! It is not necessary for players to worry if they do not get this on the first try because the basketball will return to its original position at the top of the steps if the game is saved and loaded again.

Stray comes includes a total of 25 trophies, some of which are challenging to obtain but the most of which are of the adorable sort. Even though there will be a good number of story trophies, the vast majority of the game’s awards are not difficult to obtain. There are a number of trophies that can be easily discovered by simply playing as the cat itself, such as meowing a total of one hundred times. It is important to be interested and think like a cat if you want to acquire a lot of the prizes, as exploration is the key to doing so. In light of this, the proverb “curiosity killed the cat” is particularly relevant in this game for players who are interested in obtaining the “No More Lives” trophy, which is awarded to players who have died a total of nine times.

At least the makers were gracious enough to make dying fun by having the cat purr through the gamepad during the death screen. This is one of the few positive aspects of the game. In spite of this, there are a few trophies that will require a little bit more finesse and patience to achieve, which is still welcome in a game that is so wonderful and adorable.

How do you get boom chat on kalaka Stray?

You will need to locate a basketball that you can roll off a ledge and into a bin in order to complete the Boom Chat Kalaka accomplishment. There are basketballs hidden all over the globe, but the spot where you initially enter the meat of the story is where you will have the best chance of finding them and completing this achievement with the least amount of effort.

What robots can you nuzzle in Stray?

Zakk and Riko. Two robots may be found lounging about by the entryway in Stray. They are now warming themselves by a fire. Later on, players will use these robots. The players are able to nuzzle against both of their legs, and Riko even has a comfortable seat next to him on the sofa where they may take a nap together.

What is the most advanced robot dog?

Tombot is the most lifelike robotic animal that has ever been created. Tombot is a toy that was created to mimic the appearance and behaviour of a real live dog. It offers continuous pleasure, enjoyment, and emotional support at a price that is affordable.

How to Close All Your Windows on Your Mac

How to Assign Faction in Dying Light 2