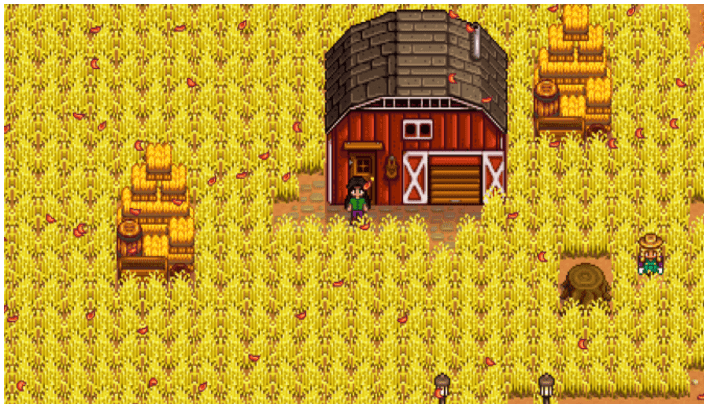 Hay is an important resource that is often obtained by cutting tufts of grass or by harvesting wheat. You can also obtain them by paying Marnie’s Ranch 50g to have some hay delivered to your house. Learn how to maintain a healthy supply of hay in your silo in Stardew Valley, especially during the winter months when temperatures are at their lowest. If you follow the advice that we have provided for you in this book, you will never have to worry about not having enough hay again.

Read Also: How to Save in Stardew Valley There is a possibility that you would run out of hay at some point during your adventure, in which case the only choice available to you would be to buy stacks of hay from Marnie. Even though Marnie’s Ranch is located immediately to the south of your farm, there are times when you won’t be able to reach her shop due to the fact that she has limited working hours. If you find that purchasing hay from Marnie is too much of a hassle for you at times, then you will have no alternative except to allow your unfortunate animals to go hungry.

You can use this strategy that is certain to give you with sufficient hay to last you through the entire winter season if you do not wish to go through all of that.

1. In the beginning of the game, you will be given a farm that is overgrown with weeds, boulders, and dead grass. It will be totally up to you to decide whether or not you want to clear away the majority of the clutter in the first week that you are here. However, before you begin cutting some dried grass, it is recommended that you first get a silo. To get the most out of the fall season, it is recommended that you refrain from harvesting all of your hay until the final week of the season. 2. When you reach the first autumn season of your playing, you need to have constructed at least two silos by this point. If you were to let the dried grass grow on your farm until autumn, you would need more than one silo because each silo can only hold a maximum of 240 bales of hay. You can get enough hay to fill all of your silos if you chop down as much dried grass as you can locate. If you see that the little hay icon has disappeared from above your head, you should immediately stop cutting the grass. This just indicates that you have loaded all of your silos to capacity with hay. 3. Instead of upgrading your Big Barn or Big Coop to a Deluxe version of either structure, build a Big Barn or Big Coop. The Big Barn or Coop is not equipped with an automatic feeding mechanism, but it is large enough to accommodate up to eight animals at once. You will now be able to physically retrieve hay from its hopper by pressing the action button that is located in front of it once you have this item. Collect as much hay as you possibly can, and then deposit it all inside a chest for safekeeping. Despite this, it is still possible to harvest hay from the hopper even if you only have access to the Deluxe farm buildings by removing the bales from the feeding bench that are assigned to the automatic distribution system. You have the option of positioning a bomb close to the feeding bench; if detonated, the bomb will clear the bench of all of the forage. 4. You need to get rid of the remaining grass that is growing on your land. Once more, retrieve rolls of hay from the hopper and place them inside your chest to keep them safe. During the fall and winter months, you can use Grass Starters to grow additional dried grass. Continue carrying out the steps until you have accumulated an amount of hay that satisfies your needs. And with that, you should now have an abundant supply of hay at your disposal! Except for a select few varieties of winter crops and pine trees, the environment is too cold for any plants or trees to flourish during the winter months. It’s possible that the majority of players are already aware that seasonal crops perish when the season changes. On the other hand, it is possible that some players will be taken aback when they reach the first day of winter and notice that all of the areas of grass on their farm have vanished overnight.

The only way to stop anything as horrible as this from happening is to cut and remove all of the grass during the final few days of autumn. Hay can be made by cutting dried grass with a scythe to obtain the dry grass. If you would rather not see the grassy fields on your farm go to waste, you should make it a point to cut them all down.

What is the best time to catch a walleye?

However, the location alone is not sufficient; in order to catch walleyes, you must cast your line between the hours of 12 pm and 2 am during either the autumn season (on days that are naturally wet) or the winter season (if you have a rain totem). Outside of these times of year, under these conditions, and with this kind of weather, the usage of magic bait is the only option to capture a walleye.

How To Catch A Walleye?

It is in your best interest to increase your chances of successfully hauling in walleyes the very first time you go fishing for them. Walleyes might be tough to locate. You will need the Iridium fishing pole, bait, and trap bobbers to accomplish this task successfully.