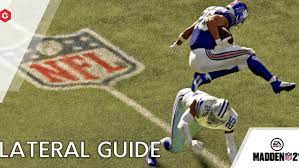 When playing Madden 21, players often find themselves in precarious circumstances, such as when there is very little time left yet they still need to score a touchdown. Knowing how to complete lateral passes in Madden 21 could prove to be useful in situations such as the one described above. By preventing the defenders of the opposing side from getting their hands on the ball, there is a better chance that the play will conclude in a successful score. The text that follows is a walkthrough that will demonstrate to you how to complete a lateral pass in the Madden 21 video game.

Read Also: How to Slide in Madden 21

How to Lateral Pass in Madden 21

Even while it is technically possible for the quarterback to use the lateral pass, it is more commonly used by offensive players other than the quarterback. Running the ball with a halfback in practice is still the best way to learn lateral passing in Madden 21, even though there are other ways to do so.

The most important thing to do is run behind the line of scrimmage while utilizing your halfback. After you have completed those steps, all you need to do is press the left bumper on your controller. If you have made sufficient progress and are not being tackled, your HB will attempt to lateral the ball back to a player who is still accessible. That might also be the quarterback for your team.

If you want to learn how to do things properly, we suggest using the practice mode. You could want to try a rushing play, particularly a pitch play. That ought to open up some space for your halfback to move the ball forward in the play. After you have moved past the line of scrimmage, hit the L1 or LB button on your controller, and then watch as the ball is passed in a lateral fashion.

One example of a lateral that can be used during a practice session is shown here. There are a few other scenarios in which a lateral pass is likely to be the most effective option. One of these scenarios is a late kick or punt return when there is very little time remaining and a score is absolutely necessary. The video, on the other hand, demonstrates a successful lateral pass that goes from the halfback to the quarterback.

Strategy is the most important factor. It is possible to lose possession of the ball if you use too much lateral movement or if you do so in an inappropriate location. When you run the ball, you have a lot of different alternatives accessible to you. There are also a great deal of different things that may be done with your quarterback in order to avoid losing possession of the ball.

What button is lateral in Madden 21?

If they go after the quarterback, you should try to lateral the ball by pressing the L1 button, and then maybe find some open space to run in with the running back. When there are two possible receivers for a lateral pass while the player is running, the appropriate button to push will be indicated by an icon. This button will be labelled either “L1” or “R1.”

Can you do a flea-flicker in Madden 21?

The lateral pass in Madden 21 may be utilized for a variety of different gameplays, much like it can in real life, including the flea-flicker and the toss.

How to Set Up AirMessage Server on Your Mac

How to Loop a Video on iPhone