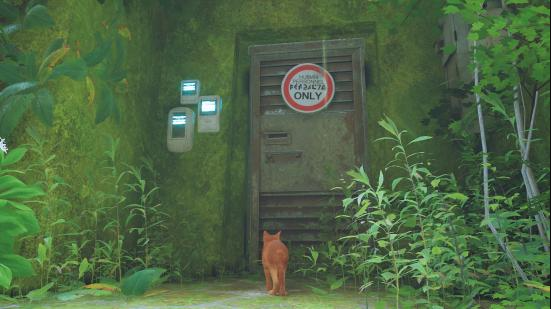 After breaking out of prison and stealing the subway key from Clementine, the Cat and B-12 are the only ones who have a chance of getting out of Stray alive and entering the Outside. The two individuals will be able to use the train once the station has been activated by putting the Atomic Battery in Stray. This will allow them to get to their final destination.

After a while, players will arrive at a subway station that appears to have been recently renovated and is populated by robots who do not appear to have a will of their own. This should not come as a surprise given that wiping memories is a form of punishment in some prisons. In order to unlock the door leading to the outside, the Cat has to make its way along B-12 until it reaches the control room. The following is a description of how to unlock the door leading to the outside in Stray.

Read Also: How to Get the Productive Day Trophy in Stray

In Stray, players need to execute three essential steps in order to assist B-12 in hacking the system and unlocking the door in order to get access to the Outside. These procedures are as follows: opening the Control Room; activating the system; and disabling the security layers.

The Control Room has several layers of security. The fact that humans were intended to be able to access the door is demonstrated by the fact that B-12 can get through its security mechanism. As a result, the Drone Companion recommends forming a partnership with the Stray Cat in order to unlock the door. Get close to the box that is located on the other side of the door that is closed off to the Control Room, and use B-12 to hack it so that it will follow the Cat wherever it goes. To position the box underneath the second control panel, which is located on the left side of the door, go closer to that panel. Start by interacting with the right panel, then hop onto the box; this will cause the stray cat to start scratching the panel on the left, which will eventually unlock the door. When you enter the Control Room, you will see that the system along with all of the machinery has been turned off. This will be immediately apparent to you. As Stray Cat and B-12 get closer to the central computer, the Drone Companion delivers a command to the feline, asking it to activate all of the other computers so that the data may be accessed. This happens as the Drone Companion moves closer to the primary computer. The central computer features three rows of monitors running horizontally across its top surface. The players have to run across each row and land on the keyboard of each separate device in order to activate it. This must be done in order for it to work. This will put the system into operation. There is a yellow locked key displayed on the screens of the three machines, which enables simple identification of each one. The first one can be found to the right of the Roof Control Station; in order to take control of it, you will need to scrape the cables. The primary computer’s right-hand side houses the secondary monitor. You can access it through the right-hand door. Climb the apparatus, cut the cords, and then take a step back to observe B-12 while he operates the machine. The most up-to-date device is the one that can be found to the left of the central computer in this room. After you have removed the plank and jumped on the black box to cut the cables, you should then give the Drone Companion permission to hack the third machine.

The very last thing that must be done is to get B-12 and then bring it to the control station that is located on the roof. This will allow them to deactivate the alarm and open the entrance that leads to the outdoors.

What is the door code in Stray?

The Secret of the Flat Door Code

To illuminate the area around the drone, turn on its flashlight. On the left, some red text is obscured by a whiteboard that is perched atop shelving and is surrounded by bottles. When you finally put your divine cat skills to work and start knocking objects off of ledges, you’ll discover that the combination to the door is 3748.

Head on over to Dufer, scramble up to the top of the bar, and turn your gaze to the room’s left side. After that, you’ll come across an artwork that you have the ability to destroy. You’ll find the combination to the safe, which is 1283, hidden behind the picture.