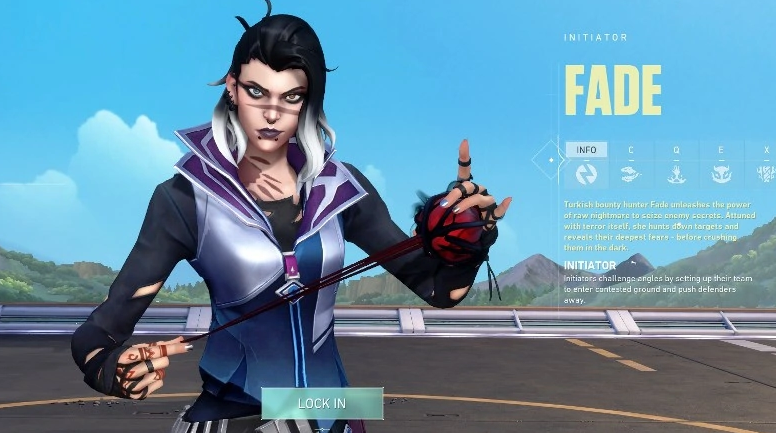 Valorant is recognised for producing new agents that add to the tactical choices in the 5v5 shooter, and the whole roster has grown from ten to nineteen over the course of the last two years since the game was released. Fade, the game’s first Turkish agent and a deadly initiator, has been welcomed into the fold by the latest act, which only recently got underway.

Fans have been eagerly expecting Fade’s arrival ever since she was first revealed, particularly since the gameplay footage made it look like using her skills in combat would result in disastrous consequences. However, getting started with them and making their talents work to the player’s advantage can be challenging, as is the case whenever a new agent is introduced into a game with such a strong emphasis on strategy. Here are the steps:

Read Also: How to Fix Error Code 19 in Valorant

How to Play as a Fade in Valorant

It is not difficult to begin with a noteworthy handful of information regarding the many types of characters that appear in Valorant. The agents are separated into many roles, including duelists, controllers, sentinels, and initiators. Since Fade is an initiator, the focus of her abilities is on gathering intelligence about the locations of adversaries for the purpose of sharing it with her allies and then ambushing and pinning those enemies in those spots.

Keeping this in mind, the ideal strategy for playing Fade is to avoid charging into the attack and instead stay back. Make use of the skills to find out where the adversaries are hiding and give your team an advantage when they begin to advance on a location. In spite of the fact that this is the most effective strategy, she was demonstrated in her gameplay reveal trailer storming a location with her skills.

Pair With A Controller On Defense

Even though Fade shouldn’t be storming in on defence either, it is important to keep in mind that her powers won’t be as beneficial on their own when protecting a location. This is important information to keep in mind. However, when combined with the powers of a controller who can maintain control of a site and frequently utilise smokes to keep an opponent at bay, Fade’s abilities have the potential to be extremely destructive.

Her seize ability will still be useful in preventing attackers from moving onto a site and pinning them down, but it will be much more difficult to anticipate where the enemies would be positioned while playing defence. Therefore, if you aren’t adequately partnered with other members of the site’s defence, it will be a lot more difficult for you to make effective use of Fade. One of the most effective defensive configurations in all of Valorant is a duo like this one. One further thing to keep in mind while utilizing Fade in combat is the fact that she can be a helpful alternative for holding onto the spike. Although there are a great number of characters, particularly controllers, who frequently find themselves in possession of the spike for a variety of reasons, Fade is an especially useful contender in many situations.

Her grasp ability can prevent foes from reaching the spike in time to detonate it, and her blind ability is especially helpful in situations in which she is aware of the direction from which foes are approaching. By using her ultimate ability, Nightfall, she is able to make it exceedingly challenging for foes to progress on a location while the bomb’s cooldown is still active. This can be of particular value on the most recent map, which is called Fracture.

The Prowler is Fade’s tier-three (C) ability. When activated, Fade will release a monster made of smoke that will move in a line and pursue whomever it sees within a very close range. This creature will go in a straight path. Players should be aware that the Prowler has an unusually low angle of sight while pursuing foes, and this should be taken into consideration.

This indicates that it is essential to make use of the prowlers in limited locations, tiny hallways, and tunnels wherever this is at all possible. When the Prowler is used in an area with a lot of open space, there is a significantly smaller chance that it will make contact with the enemy and blind them. As players get more skill with Fade, this is one of the most critical tricks to pick up and perfect. Seize, Fade’s Q ability, can be purchased for only 100 credits per round, which is shockingly low considering how helpful and affordable it can be in the appropriate circumstances. Bear in mind, however, that despite the fact that it may hold adversaries captive in a relatively small area for a few seconds at a time, the area it actually covers after landing is quite limited.

Because of this, it is strongly recommended that it not be used in public places. If players are advancing on a location or are aware of the precise direction from which adversaries are approaching, it is considerably simpler to cover an area that is likely to contain enemies. Learning how to make use of the various agents on Valorant, such as Chamber, is an essential component of playing against them as well, and this is a helpful tip for making use of Fade. When playing as Fade, understanding the trajectory of her thrown abilities can be one of the most challenging ideas to wrap your head around. Both her Q (Seize) and E (Haunt) have the ability to be sent into the air as orbs; however, once in the air, they do not follow the standard path that the majority of the game’s orb abilities take.

After travelling a certain distance, both of these spheres will come crashing to the ground in a straight line rather than following an arc-like path as they fall. Tossing it across the map won’t work, therefore it’s vital for players to choose the placement of their throws much more carefully. This means that players need to be careful, as throwing it across the map won’t function. When dealing with either of them, it is better to keep your distance somewhat close. Considering all of Riot’s ambitious ambitions for the future of Valorant

Even though it may not feel like it, the ultimate ability Nightfall that Fade possesses does not have an endless range. If you activate it close by, players will have an easier time covering the entire site, and this is typically the strategy that will yield the best results. The most effective way to make use of this skill is to utilise it to clear out a site, protect a spike, or defend a site when certain foes are approaching from a specific direction.

The Nightfall ability will deafen, degrade, and label foes on the map. Using this ability in one of the conditions outlined above can be an awesome way to flush out an entire team. It’s okay if it takes you a few tries to become used to these talents; don’t stress about it.

How do you use Valorant fade prowler?

BRING a Prowler up to speed. FIRE to advance the Prowler in its mission. HOLD FIRE to move the Prowler into the crosshairs of your target. The Prowler will follow the first enemy or terror trail it discovers and will near-sight the adversary as soon as it makes contact with them.

Is it hard to play fade?

Some of Fade’s powers are very similar to other abilities already in the game, making it reasonably simple to learn and apply them. However, she was created to fulfil a particular function, and it is imperative that one understand how to make the most of her tremendous ability set in order to derive the greatest benefit possible from using her talents.

Although Fade can be a little difficult to understand at first, she is competent enough to take over the primary job of the team’s information-gathering initiator and perform admirably in that capacity.

How To Make Valorant Full Screen