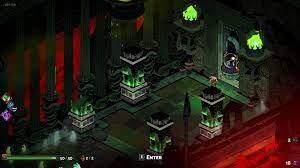 Hades is more than just a thrilling roguelike; it’s chock full of intriguing stories and puzzles to solve, one of which being the mystery of the House of Hades’ two locked doors. Hades is full of mysteries, but these sealed doors are one of the more prominent ones that gamers may desire to investigate.

It is located in the western wing, and each door is located directly at the end of its respective hallway. On the north side of the chamber, you will find Hades’ bedroom, while on the south side, you will find the Administration Chamber, which is very forbidden. Both rooms are crucial to the story of the game. There are a few tasks in Hades for which you’ll require entry to this room, including those granted by other gods. Continue reading to discover the secrets behind Hades’s two most crucial locked doors.

As a first step, players will need to make it to the point where Zagreus rests and has a flashback to the Administration Chamber in Hades, where they will then be able to enter the chamber. An administrative privilege contract can be purchased from the contractor in the House of Hades several runs after this story arc, which grants entrance to the Administration Chamber. For the other side, defeating Hades’ last boss eight times is required to open the bedroom door. Having the best possible setups for these play throughs in Hades is recommended for this accomplishment.

Read Also: What Titan Blood Does And How To Use It in Hades

How to Unlocking The Locked Doors In Hades

The Administrative Privilege can be purchased from the House Contractor for a fee of two Diamonds, which is a significant investment for players who are just starting out in the game. In Hades, there are a variety of ways to acquire diamonds, which are detailed below.

The bedroom of Hades is certainly one of the final objectives that players should concentrate on achieving much later in their own play throughs. To complete Hades with a total of eight successful runs will require a lot of work and preparation on your part. It is essential to keep in mind, however, that Zagreus will not have unrestricted access to Hades’ bedroom until after he has successfully completed ten runs. After you have finished this laborious chore, you should talk to Achilles, who, after some persuasion on Zagreus’ part, will hand over the key to the bedroom.

How to Enable DLSS in Red Dead Redemption 2

How to Use the Spray Feature In COD Mobile