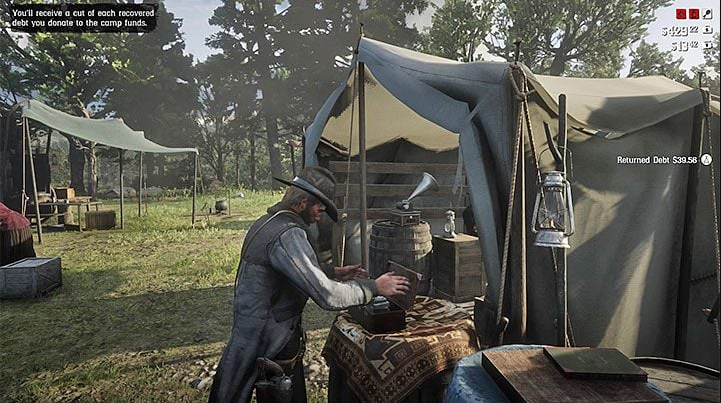 Red Dead Redemption 2 is the second instalment in the Red Dead series. In this game, the protagonist, Arthur Morgan, teams up with the other members of the Van Der Linde Gang to face the dangers of the Old West while also creating massive camps across the countryside. It is up to Arthur to provide for the camp, and a portion of this obligation includes making purchases that will make everyone’s lives just a little bit easier to manage. In Red Dead Redemption 2, you can learn how to improve your camp by following the steps in this article. So let’s get started:

The progression of the player’s camp in Red Dead Redemption 2 is one of the most crucial things they may perform from a gameplay point of view. However, gamers won’t be able to improve their camp straight away because doing so requires a certain level of experience. On the other hand, you won’t be able to select this choice until you’ve advanced to Chapter 2 of the game and finished a certain quest that’s part of the plot. Money Lending and Other Sins is the name of the required plot mission that players need to finish, and Leopold Strauss is the one who gives it to them. The objective of the mission is for players to collect money owed to them by others and then deposit it in the tithing box located at the camp. Even while the players only need to collect one debt in order to unlock camp upgrades, they will eventually have to go after the other debtors.

After the money has been placed in the tithe box, Arthur will first receive his portion of the money, and then he will be shown the ledger. The ledger is a book that may be found next to the tithing box. It lists all of the many camp upgrades that are currently available. The players have the ability to purchase a number of upgrades for the camp by using the cash from the tithing box as well as Arthur’s own funds. These upgrades will increase the players’ medication supplies, ammo supplies, food supplies, and other supplies. Players of Red Dead Redemption 2 may wish to prioritize upgrading Arthur’s accommodation over all other camp improvements, despite the fact that they have access to a range of other camp improvement options. Unlocking rapid travel, which will make it much simpler for players to progress through the game’s various story tasks, is a reward for upgrading Arthur’s lodging, which becomes available only after players have upgraded Dutch’s accommodation first.

However, the ledger has other applications outside only being used to purchase improvements for the camp. As a result, players of Red Dead Redemption 2 will want to ensure that they make consistent contributions to the tithe box during their journey, as it is also utilized to replenish the provisions found at the camp.

When can you upgrade camp Red Dead 2?

After the ledger has been unlocked, it will be found in the area next to the contribution box for the camp. When you buy upgrades from the ledger, the money will come first from the funds provided by the camp and then from your own personal finances. During the process of unlocking the ledger, you will also receive the Leather Working Tools. Find it toward the back of the book for a price of $225 and you’ll find it there.

How much does it cost to upgrade camp in RDR2?

First Thing’s First is the name of the one and only particular RDR2 camp upgrade that can be purchased for Dutch’s Tent in Red Dead Redemption 2, and it costs $220. This is actually one of the better improvements to get once you’ve built up a bit of cash because it raises camp morale, which in turn causes members to work harder and donate more money to the cause.

Is it worth upgrading the camp RDR2?

You need to improve Arthur’s accommodations as soon as the other campers have contributed enough money to make it possible. This upgrade, which can be purchased for $300, enables the additional perk of quick travel. The final modification consists of spending $300 to improve the living quarters of the other campers; doing so lifts the spirit of the entire campground.

What happens if you are away from camp too long RDR2?

In the event that players spend an excessive amount of time away from the camp in Red Dead Redemption 2, Dutch will delegate a member of the party to locate Arthur Morgan and bring him back to the main group.

The Best Types of Online Roulette