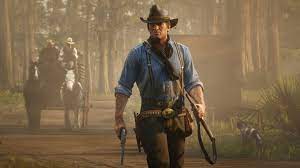 To get cash quickly and make money in Red Dead Redemption 2 is difficult if you are an outlaw, but you can make money in a variety of ways regardless – usually by helping strangers or killing bandits, or vice versa if you are feeling a little more “black hat.” Red Dead Redemption 2 was developed by Rockstar Games and released on October 26, 2018. There are a lot of other ways to get money besides that, such as hunting and selling the meat you catch at butcher shops. However, many of these methods just produce a steady stream of income, which is sufficient for restocking ammo but not much else. Here are some tried-and-true methods for making quick cash in Red Dead Redemption 2:

Read Also: How to Become a Trader in Red Dead Redemption 2 Horses may be a lucrative business in Red Dead Redemption 2 if you know what you’re doing. Stables can be used to sell, store, or enhance any horse you obtain in the game, albeit the asking price will change depending on the horse’s type. For example, stablemasters may only offer $3 or less for your horse if it was acquired dishonestly, but standard breeds don’t fetch much more than that even with proper paperwork.

Finding a fast race horse or sturdy shire isn’t easy, but the reward for your efforts could be substantial. You can find wild horses all throughout the world, but taming them takes some practice and patience, so you shouldn’t rush off after every bronco you see. It’s common knowledge that butchers, trappers, and shopkeepers in Red Dead Redemption 2 will pay top dollar for animal pelts and flesh, but it takes skill to maximize the profits from each hunt. One reason for this is that the method of slaughter might affect the quality of the pelts that are collected. If you use a small game varmint rifle to take out a rabbit, for instance, the chances of the pelt being undamaged are quite high.

It’s probably not even worth it to go back to town after shooting a dozen or so chickens with a pistol. If you can get rid of these raw materials before they rot and disintegrate, you can earn a better return on your investment. However, Arthur Morgan has other targets in his sights besides animals. By locating Wanted Posters in local Sheriff’s offices, you can begin a bounty hunting quest to apprehend wanted offenders, perhaps earning $100 or more. Even while the honour system in Red Dead Redemption 2 is supposed to be fair, there are still a great deal of tangible benefits to playing the role of the honourable cowboy across the western frontier. Stores will buy and sell to law abiding citizens at better rates, and staying on the right side of the authorities also means you won’t have to worry about paying off any bounties on your head, which can quickly rack up into the hundreds if you’re not careful, which will result in an increase in the number of bounty hunters who will be constantly on your tail.

When you have random interactions in Red Dead Redemption 2, it pays off to be friendly to strangers because many of them will return the favour later on in the game with favours and rewards. This can lead to long-term gains as well. If you find yourself in a situation where you are inclined to rob a store or kill a random person for money, you should probably refrain from doing so.

4. Complete story missions and side quests It may seem like stating the obvious to say that completing the main story and optional quests in Red Dead Redemption 2 is the best and quickest method to start making money in the game. While not every task will reward you with a large sum of money (or any money at all), certain ones offer the most lucrative payoffs in the game.

If you decide to loot a farm or go on a quest for mythical beasts with a member of your gang, you can expect to share in the spoils or, better yet, have the experience all to yourself. Anyone who prioritises finishing the story before doing anything else won’t be short of the big cash, especially if the campaign’s scale and scope continue to grow.

5. Sell carriages and trinkets to fences The fence is a specialised kind of merchant that can be found all around the western region of Red Dead Redemption 2. He is known for dealing primarily in animal items and hunting equipment. When you meet him for the first time, he’ll be at Emerald Station, which is located east of Valentine. He’ll offer you a good price for any trinkets you find in the game, such as pocket watches, gold bars, or consumables, and he’ll buy them all. You can also return stolen carriages to his stable for a transaction that is less legitimate. This will yield you a hefty wad of notes per vehicle, and you can steal carriages from homesteads, towns, or even just out on the road.

Should you sell gold bars rdr2?

In Red Dead Redemption 2, you can quickly increase your bank balance by selling Gold Bars. Each gold bar is worth $500, which, in the days of the wild west, was a significant amount of money. It should come as no surprise that they are exceedingly hard to come by given how valuable they are.

Can you rob the bank in Rhodes?

As part of a downloadable content companion activity, players have the option to rob the bank alongside Arthur, Uncle, and Charles. The three individuals wait until nightfall before using explosives to create a hole in the exterior wall of the vault chamber. They then climb into the bank, where the three members of the Van der Linde gang are able to easily unlock the damaged vaults and steal the money inside of them.

What is Capitale rdr2?

As part of the Blood Money update, a brand-new form of currency known as Capitale was also created. According to Guido Martelli’s explanation, the currency is used in illegal transactions; however, it has been getting into the hands of numerous crooks, which has caused it to lose some of its value.

How to Install And Enable Grammarly for Google Chrome