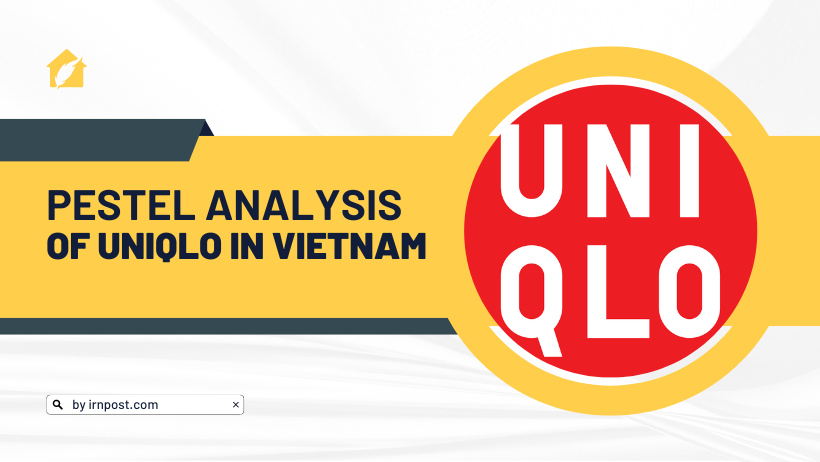 Uniqlo, a Japanese retail chain, has been present in Vietnam since 2019 and has 13 stores (As of October 31, 2022). The brand offers affordable, high-quality clothes for both men and women. Uniqlo has become one of the most popular brands in Vietnam, especially among young people.

In recent years, Uniqlo has opened several stores in major cities across Vietnam, such as Hanoi and Ho Chi Minh City. The brand has also been active in promoting its clothes through social media and advertising campaigns.

Uniqlo’s success in Vietnam is due to its ability to appeal to a wide range of consumers. The brand offers something for everyone, whether it’s basic tees or more stylish pieces. Uniqlo is also known for its excellent quality control, which has resulted in few complaints from customers.

With its growing popularity, Uniqlo is quickly becoming one of the leading fashion brands in Vietnam.

PESTEL is an acronym for Political, Economic, Social, Technological, Environmental and Legal factors. This framework is a useful tool to use when conducting a macro-environmental analysis of a company’s external environment. The factors within each category can have both positive and negative impacts on a company’s business operations and performance.

The political environment in Vietnam is relatively stable. The country is a one-party state, with the Communist Party of Vietnam holding power. The government has been pursuing economic reform since 1986, and this has helped to attract foreign investment and improve economic growth.

However, there are still some restrictions on business operations, and the legal framework is not yet fully developed.

Political factors can have a significant impact on businesses, and this is certainly the case for Uniqlo. The company has had to navigate a number of political challenges in recent years, including trade tensions between China and Japan, and the rise of nationalist sentiment in both countries.

Uniqlo has also been caught up in the US-China trade war, with its products subject to tariffs on both sides of the Pacific. This has put pressure on Uniqlo’s margins, and forced the company to look for alternative sourcing options.

Looking ahead, Uniqlo will need to continue to monitor political developments closely, and adapt its strategy accordingly.

Vietnam’s economy has been growing rapidly in recent years, with an average annual growth rate of around 8% in 2022. The country has a young and rapidly growing population, which provides a large potential market for businesses.

Inflation has been relatively low and stable in recent years. However, Vietnam’s per capita income is still relatively low, and the country faces a number of economic challenges, such as a high level of public debt, a large trade deficit and a lack of infrastructure.

The population of Vietnam is young and growing rapidly. The median age is just over 30 years old, and the population is expected to reach 100 million by 2050. The official language of Vietnam is Vietnamese, but English is also widely spoken. The country has a strong tradition of family values and Confucianism, which places importance on filial piety, respect for elders and hierarchical relationships.

However, the younger generation is becoming increasingly Westernised in their attitudes and behaviours.

Vietnam has seen a rapid expansion of internet and mobile phone usage in recent years. The country has a young population which is highly connected and engaged with digital technology. This provides opportunities for businesses to reach consumers through online channels.

However, the level of infrastructure development is still relatively low, and internet speeds are slower than in developed countries.

The technology sector has seen significant growth in recent years, with the government investing heavily in infrastructure and initiatives to promote the adoption of new technologies. This has created a favourable environment for businesses to operate in, and many foreign companies have set up operations in Vietnam in order to take advantage of this.

However, there are a number of factors that businesses need to be aware of when operating in Vietnam, as the country does not have the same level of developed infrastructure as other countries in the region. Additionally, Vietnam’s workforce is still relatively unskilled compared to its neighbours, which can pose challenges for businesses looking to adopt new technologies.

Vietnam is a tropical country with a diverse range of ecosystems. The country is vulnerable to natural disasters such as typhoons, floods and landslides. Deforestation and pollution are also major environmental concerns.

The environmental laws in Vietnam are not well developed or enforced, and businesses may find it difficult to comply with them. In addition, the government has been known to intervene in environmental disputes, often in favor of the environment.

The legal framework in Vietnam is still under development, and there are some restrictions on business operations. Corruption is also a problem in the country. However, the government is taking steps to improve the business environment and attract foreign investment.

Vietnam’s legal system is still in the process of development and is not yet fully mature. This can pose difficulties for businesses, as the law may not be clear on certain issues, or there may be conflicting interpretations of the law. In addition, the enforcement of the law can be inconsistent, and courts may be subject to political influence.

Vietnamese law does not recognize the concept of “force majeure” (unforeseeable circumstances that prevent a party from fulfilling its contractual obligations). This means that businesses may be held liable for breach of contract even if they are unable to fulfill their obligations due to events beyond their control.

Vietnam’s tax system is complex and ever-changing, which can make it difficult for businesses to comply with the law. In addition, the tax authority has been known to engage in arbitrary enforcement of the law, and there have been reports of corruption among tax officials.

The labor laws in Vietnam are relatively employee-friendly, and businesses may find it difficult to terminate employees or make other changes to their employment conditions. In addition, the government has been known to intervene in labor disputes, often in favor of the employees.