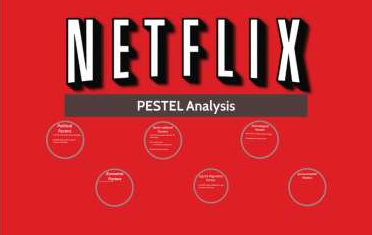 A PESTLE analysis is a framework that is essential for businesses like Netflix since it helps to understand the dynamics of the market and enhance the company’s business on an ongoing basis. The term “PESTEL analysis” is another name for the “PESTLE analysis.” Let’s get started with the PESTLE analysis of Netflix:

Read Also: How to Change Subscription Plan in Netflix

The following is an explanation of the political elements that are included in the PESTLE analysis of Netflix:

There are several countries in which Netflix is not yet available. Netflix is unable to operate in China, the world’s largest economy, because to restrictions enacted by the United States. As a result of these restrictions imposed by the United States of America on Netflix in other nations, there are many unexplored markets. Additionally, some of the content that is displayed on Netflix is censored, which is one of the reasons why some nations do not permit it to broadcast. In addition, the tax rate that is applied to Netflix in nations that are part of the EU is rather high, which is another threat to the corporation.

The following is a list of the economic factors that were considered for the PESTLE analysis of Netflix:

Since the beginning of Pandemic two years ago, the over-the-top (OTT) business as a whole has experienced significant expansion. Today, there are more than one hundred OTT platforms, out of which Netflix has the largest revenue share, accounting for 29% of the market.

At the moment, Netflix is experiencing a period of explosive growth. As the trend indicates, there will be a surge in demand in the Netflix market if the GDP growth rate remains strong. There are a number of economic issues that have an impact on the expansion of Netflix, including unemployment, wage rates, taxation, inflation, and interest rates. Netflix is going to need to produce original content if it wants to remain competitive in the market as OTT platforms continue to proliferate. In addition, in order for them to thrive in countries such as India, they need to maintain their rates low and provide a greater number of offers because competing platforms offer the same thing at a lower cost. Other costs, such as domestic streaming costs and marketing charges, must also be kept under control in order for the business to continue existing. The fact that Netflix is available in a number of countries means that fluctuations in the value of the currency must also be taken into consideration.

The following is a list of the social elements that are considered in the PESTLE analysis of Netflix:

A variety of economic issues, including unemployment, wage rates, taxation, inflation, and interest rates, all have an impact on the number of people that watch Netflix. For Netflix, it is essential to take into consideration demographic shifts, gender roles, equality norms, and society expectations. Netflix’s ability to determine the social trend of its consumers can be helped in part by the customers’ online buying and the patterns of spending it reveals. mainly due to the fact that everything is dependent on the purchasing power of the corporation. On the other hand, the working environment at Netflix motivates employees to join the business and produce high-quality content by virtue of the fact that it offers a competitive salary and benefits package. In order for Netflix to expand its presence in the market, the company might do market research in a variety of demographic subgroups to better comprehend the requirements of the consumer base and then generate content based on the consumers’ preferences.

Because it offers such interesting programming, virtually every household in the United States has signed up for a Netflix account. Students, following this trend over the past couple of years, have also become increasingly interested in Netflix and are spending more time watching content that is available online. Consideration should also be given to the availability of dependable broadband access as well as large area target networks for expansion.

The following is a list of the technological elements that are included in the PESTLE analysis of Netflix:

Due to the fact that Netflix is an online application, technology is an essential component for the company. Netflix places a high priority on protecting its trademark, copy right, patent, and other intellectual property rights. In order for them to stream their content, they need to consistently have intellectual rights updates from third parties.

Customers in countries such as India may resort to unlawful means to view television shows and movies if a company’s website is not properly maintained; as a result, these businesses need to ensure that their websites are operational. They also need to make sure that the cyber security is taken care of, as there is a possibility of theft occurring when the money is being processed.

The impending technology known as 5G will bring about a significant change for Netflix because it will enhance the rate at which users can browse the website. The steady improvement of technology has made it possible to publish a wide variety of new works within a relatively short amount of time.

The new “thumbs up” option on Netflix contributes to an improvement in the level of personalization of the viewing experience by enabling the firm to better understand the interests of its customers and to recommend programmes that are more in line with those preferences. A strong suit for Netflix is its utilisation of a wide variety of algorithmic approaches in addition to machine learning in order to market its shows. The corporation invests a significant amount of money into research and development in order to improve the level of customer engagement.

The following is a list of the legal factors included in the PESTLE analysis of Netflix:

Before entering into any new market, it is vital to investigate the policies of the government because of the impact they have on the firm. Because of the rapid growth of technology, it is now more necessary than ever to protect and safeguard data. For the sake of the consumers in that country, the rules governing intellectual property rights, consumer protection, and data security should be adhered to at all times.

Streaming content on numerous devices at the same time should also be examined, due to the fact that users frequently share their credentials with one another. The most significant potential challenge for Netflix is related to intellectual property rights. Therefore, in order to protect themselves, they ought to acquire the appropriate licencing for the television shows and movies that are being presented.

It is also sometimes difficult for them to comprehend and comply with local rules, regulations, and customs in other jurisdictions, including local ownership requirements for streaming content providers. This is particularly challenging for companies that operate in multiple countries. Netflix must also obstruct customers from other countries from accessing the content they stream online by employing a variety of technical measures. This is to prevent users from stealing the content.

According to Netflix’s PESTLE analysis, the following are the environmental factors that have an impact on the company’s operations:

As concerns about the environment and long-term sustainability continue to grow, the environment factor has emerged as an important component of PESTEL analysis. Despite the fact that Netflix does not have a significant direct influence on the environment due to the fact that its whole operation is conducted online, the firm continues to do what it can to safeguard the natural world.

Netflix is committed to use renewable technology whenever possible in an effort to reduce its environmental impact. Netflix has made investments in wind power to lower its carbon impact and counterbalance the amount of electricity needed for cloud storage. This is due to the fact that one survey found that each streaming service contributes 1% of its overall carbon footprint to the total global output. The company makes every effort to operate in a sustainable manner.

Another measure that is being taken to safeguard the environment is that an effort is being made to reduce the amount of paper that is being used in the office. One of the most important considerations that Netflix has to take into account is the company’s high level of electricity use.

In conclusion, the preceding Netflix PESTLE Analysis demonstrates the numerous factors that have an impact on the company’s overall business performance. With this insight, it is possible to evaluate the significance of many business elements that are external to any brand.

The following is a list of the social elements that are considered in the PESTLE analysis of Netflix: A variety of economic issues, including unemployment, wage rates, taxation, inflation, and interest rates, all have an impact on the number of people that watch Netflix. For Netflix, it is essential to take into consideration demographic shifts, gender roles, equality norms, and society expectations.

What are the challenges of PESTLE analysis?

Con: Some users of PESTLE analysis oversimplify the amount of data utilised for judgments, which makes it simple to use insufficient data. This is one of the disadvantages of using PESTLE analysis. The danger of collecting an excessive amount of data is that it can result in “paralysis by analysis.” It’s possible that the data used were based on assumptions that turned out to be unfounded later on.

How often should a PESTLE analysis be done?

once every half a year
It is recommended that this analysis be performed once every six months in order to detect any changes that may have occurred in the macroenvironment. Organizations that are able to successfully monitor and adapt to changes in the macroenvironment will be able to differentiate themselves from their competitors and will therefore have an edge over others.

What is a Managed Database?

How to Turn Off JavaScript in Firefox