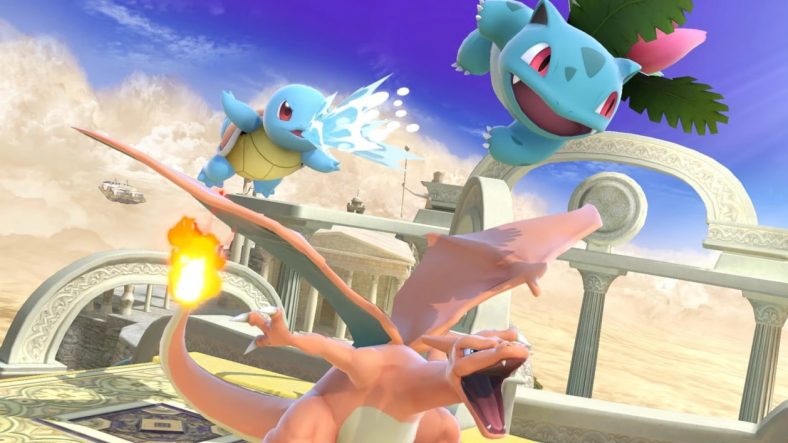 Super Smash Bros. Ultimate offers a huge number of characters for you to choose in order to win the fights. If you choose the character of Pokemon Trainer to join into the fights, then you will be associated with three dreadful Pokemons on your side.

In this article, I will guide you on how to play, attack, and also special moves of each Pokemon which will help you win the fight as Pokemon Trainer character.

A fast tiny fighter Pokemon with an impressive speediest attack than the other two Pokemons. Squirtle is the best one you can use to fight with smaller rivals like Pichu and Villager. Squirtle has three Neutral Attacks, the first two hits are a one-two sequence jabs which deal 2 and 1.5 damage respectively. And the third attack is a spin kick finisher which deals 4 damage. You can make this combo by tapping the Attack button repeatedly or by holding it.

The Ledge attack of Squirtle can deal 10 damage, while the Wake-up attack deals 7 damage.

The attack in which  Squirtle flies out of a run or sprint with a sideways screw kick that resembles its forward air attack deals 8 damage. This attack is best to use for the rivals which appear near to Squirtle.

There are three smashes attacks for Squirtle:

There are five grabs which Squirtle has:

This attack performs when Squirtle extends its little limbs in mid-air tumble and turns into a kind of projectile that deals most damage right at the point of activation, while the active period of this attack stays on for a long time. This attack deals 10 damage.

This attack performs when Squirtle lies prone in midair and kicks forward with its whole lower body, generating a small corkscrew of water. The most damage is dealt in the initial thrust, this attack deals 7 damage.

During forward air attack, Squirtle kicks forward same as many fighters’ spearing back air attacks, or like Squirtle’s own spearing back air. Front and back air start out basically identical, but you might want to lean on one or the other in different positions. Forward air is punchier and easier to use, but back air has more potential, and of course, with more risk too.

In this attack Squirtle spins with its tail extended to its full length backward, hitting multiple times with a very good backward-aimed hitbox. Scoring all of the drilling hits before the final airborne finisher requires Squirtle’s jump arc to line up correctly with the enemy’s trajectory and position. This attack deals 1×3, 6, 2 damage.

This attack performs when Squirtle whips its tail upward, aimed upward that spins from the front angle and then goes a little distance behind. you will get many chances during matches to chase after higher altitude opponents with this attack. This attack deals 7 damage.

This attack deals 1.5×5, 4 damage. In this attack, Squirtle drills down while falling, hitting multiple times. After the tail hits a victim five times, the sixth hit will deliver the enemies away.

Squirtle’s Water Gun is a zero-damage move which used for redirecting items, shots, and enemies. Remember to charge up first before Squirtle can squirt its water jet.

The best use of Water Gun is when edge-guarding, if the chance appeares, it will push your rival back with the water stream.

This move performs when Squirtle pulls into its sturdy shell and spins in one direction, bouncing off after hitting anything. While Squirtle spins, hold forward or backward to influence momentum a bit. Hold forward to travel as far as possible, keeping the move active for the max amount of time, and hold back to move the minimum amount. This attack deals 13 damage.

In this attack, Squirtle surfs a sudden huge spout of water upward like a big ball. This is useful as a defensive reversal, a juggle extender, and a recovery lunge. Holding forward or backward can influence the surging waterball’s travel. This attack deals 1.4×7, 3 damage.

This one slower than Squirtle but has great multi-hit pokes and incredible power and coverage aiming straight up mid-stage. Same as Squirtle, Ivysaur also has three Neutral Attacks. This is a three stage sequence combo hit that starts with a couple of creeping slaps that deal 2 damage each. The third attack stage is a furious multi hit vine blender that can be executed by holding the button, though the rival is pushed away the more the hits are dealt.

Ivysaur has three Defensive Attacks, which the Ledge attack deals 9 damage, and both the Wake-up attacks deal 7 damage each.

This attack performs when Ivysaur strides and throws it weight into a forward headbutt, knocking victims into a low altitude tumble that allows for follow up hits, thisattack deals 12 damage.

This attack performs when Ivysaur diverges its  bid bladed leaves and pinwheels to hit in all directions. This is a great attack in general, like a flying cutting blade, this attack deals 1×7, 2 damage.

This attack performs when Ivysaur lashes out with a vine from diagonally up forward, and up downward. This is a slow attack for an aerial attack, hitting in about the same time smash attacks usually take, but the range and power are great. This attack deals 12 damage.

This attack performs when Ivysaur whips backwards twice, where the first vine whip combos into the second to knock victims back. This attack is fast, but has slightly less coverage and damage than Forward Air attack. This attack deals 3, 6 damage.

This attack performs when Ivysaur  bulb explodes to send nearby enemies. flying far away. The bulb explosions during up air attack hit a huge area around the bulb, making this a dominating move when going after enemies higher in the air, or standing on platforms above. This attack deals 15 damage.

This attack performs when Ivysaur flips upside down to direct the bulb’s spore explosion downward. Down air attack does less damage than other bulb moves but hits faster, with just as generous a hitbox.

In this attack, Ivysaur shoots seeds straight upward rapidly. The force Ivysaur gathers to start shooting is an attack in itself, popping close-range foes up right into the seed barrage. Holding the input will launch more seeds. Depending on the target’s damage percentage, you can hold them in place for three or four times more seeds than standard, still scoring the launcher hit on release. This attack deals 3, 1.5×4, 3 damage.

This move performs when Ivysaur flings a crescent-shaped plant projectile, which twirls at variable speed through anything in the way, and it can plow through multiple targets. This attack deals 8 damage.

This attack deals 11 damage, where Ivysaur’s Vine Whip special is variable depending on where you use it. Midstage, Ivysaur only lofts up a little bit during the first midair use of a given jumping period. This move also won’t leave Ivysaur helpless after, so you can still double-jump or perform other actions while in midair, even another up special Vine Whip.

The heaviest of all the Pokemon in the roster of Pokemon trainer, with overwhelming strength and range on attacks. Charizard has three Neutral Attacks, with its swings with a three hit combo. The first hit is the fastest move among all the other Pokemon in the trainer’s roster and it deals 2.5 damage.

The Ledge attack of Charizard deals 10 damage, while the Wake-up attack deals 7 damage.

This attack deals 11 damage, where Charizard lunges forward with a dropkick that does most damage right on activation and sends enemies flying far away.

This attack performs when Charizard spins forward, hitting around with its curved tail. The most damage is dealt if the tip of the tail hits the opponent, this attack deals 12 damage.

This attack performs when Charizard swipes in front with its claw, knocking enemies off their feet even at low percentages. This is the speediest attack which deals 12 damage.

This attack performs when Charizard lashes backward with a tail strike, reaching far and hitting hard. The reach is great, but if you have time for the wind up, deals 14 damage.

This attack performs when Charizard swipes upward with its horned head front to back. This fills the usual role of most Up tilts, swinging across an arc upward to juggle helpless enemies or knock down jumping enemies.

In this attack, Charizard starts to exhale spews of flames towards the enemy. The torrent is very powerful at first, but quickly drop as Charizard’s bellows empty. When the fire is temporarily empty, you have to stop using Flamethrower for a while. This attack deals 2×3, 1×3 damage.

This attack deals 6, 18 damage, where Charizard hunches for a moment, building tension, then rockets forward an astonishing distance, flames and smoke trailing in its wake. Charizard slams anything which gets on the way with an extremely powerful blow, bouncing off rather than continuing on the usual lengthy path.

Flare Blitz is naturally good for recovery from way offstage, basically anything higher than the stage’s floor is recoverable.

In this attack, Charizard rockets almost straight upward with a launcher. The initial hit at ground level is generous at close range, blows up anyone liable to get carried upward with further hits. This attack deals 5, 2×4, 4 damage.

In the Final Smash, the three Pokemon combine their powers for overlapping attacks. This super-effective Final Smash brings up a solid Solar Beam straight across from wherever it’s activated. And as well about half the way out, for some extra coverage. In climax, the Whirlpool will be created by the unison of Pokemon powers and suck all the nearby rivals in.

There you go, all the guides on how to play, attack, and also special moves if you choose the Pokemon Trainer character to join the fights, hopefully will help you to win the battles.

Call of Duty: Black Ops 4 Update Crashes On Xbox One