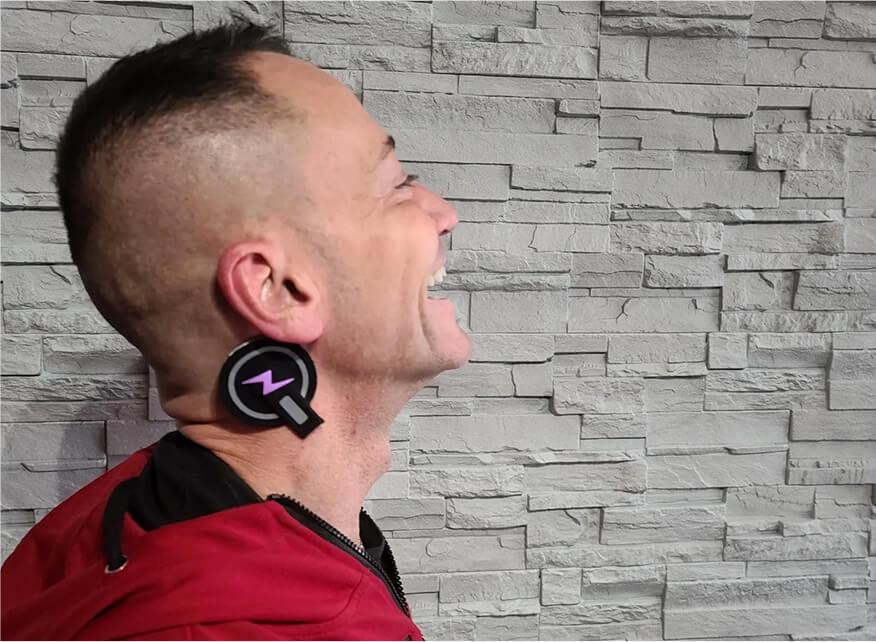 If you are a coffee junky, pound energy drinks, or take supplements to give yourself more energy and/or to help increase your focus for completing tasks, then you may want to look at energy patches.

An energy patch is a newly developed device that allows the user to receive neurostimulation directly to their nervous system. An example of one of these patches is Feelzing by Thync. Their product is a two-use, disposable patch that, when placed behind the ear, provides a five-minute electrical current to the greater auricular nerve. This electric stimulation creates an autonomic nervous system reaction shown to boost mental alertness and energy. The effect lasts up to four hours and is reported to be equivalent to (or more) the effects that coffee and energy drinks provide.

How does the process work?

The patch consists of electrodes (anode and cathode), powered by a small built-in battery, and tiny electronic circuitry that delivers electrical stimulation using a proprietary waveform pattern of electricity. The device is designed to deliver an optimal amount of electrical current through the skin and muscle tissue to reach nerves in the head, providing stimulation to the nervous system and the brain.

The FeelZing product is the world’s first neurostimulation patch designed to improve energy and mental focus. They have performed a decade of research and development in the creation of this very small and easy-to-use energy patch. The Feelzing patches use proprietary waveforms to stimulate the nerves of the sympathetic and parasympathetic nervous systems. This creates “smart energy,” which is a calm state of focus and alertness without anxiety and the jitters.

The process is very simple. You clean the skin behind the ear and apply the patch. You will then experience a 7-minute stimulation. The effects will be increased focus and energy for up to 4 hours. The product also allows two uses by peeling the outer gel layer off and reapplying for the second use. This must be done within 24 hours of the first use.

The use case for energy patches is to give people an extra boost of energy. People typically use energy patches to wake up first thing in the morning, before a workout, during the afternoon slump, for driving and studying. The patch will give you a noticeable sensation. Reports from users say that they have feelings ranging from a little tingle to a full electric massage. Initial uses may generate a bigger reaction and have a very strong sensation.

Are there any side effects?

Energy patches have been around for a while and mimic the electrostimulation that has been used in medical treatment for many years. Medical professionals use implanted electrodes that deliver constant electrical currents. They have been doing this for over 20 years to treat issues like epilepsy, extreme pain, Parkinson’s, and other disorders with an outstanding safety record.

Thync (producers of FeelZing) has been making these types of products for over ten years and has been researching and conducting testing of neurostimulation for a decade. They have thoroughly examined the science behind FeelZing with hundreds of subjects, tens of thousands of individual tests, and have more than 30,000 peer-reviewed studies confirming the safety and effectiveness of electrical stimulation to the nervous system.

One of the many benefits of this process is that unlike chemical stimulants (coffee, energy drinks, pills, etc.), electric neurostimulation directly to the nervous system gives you all the energy and mental boosts without any of the side effects like jitters and anxiety.

In closing, electric neurostimulation used in energy patches has been shown to be an effective, low-cost, and safe alternative to using chemical stimulants. The science for this process has been around for some time, but it is just recently that the technology has become small enough and cheap enough to be developed into a consumer level product. These devices have been fully tested; for example, 90% of FeelZing users (during pre-launch testing) reported having a positive effect on their energy and focus. This area is growing rapidly, and you will see many more products like this. At the end of the day, the only way to really see how an energy patch like FeelZing works is to try it for yourself.

Related Topics:energy patches
Up Next

Why People Are Using CBD