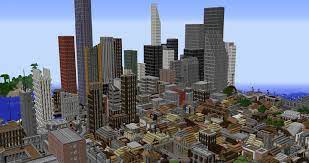 One of the most rewarding experiences that one can have as a Minecraft builder is to take an empty Minecraft world and turn it into a metropolis that is entirely their own. Cities in Minecraft can work in a wide variety of various ways, and their appearance can be customised anyway the designer chooses. The possibilities in terms of design are literally countless. Creating a complete city in Minecraft can appear to be an insurmountable task, but in reality, it’s not quite as challenging as it might first look. Every city must have its origins in some other settlement. The following is an easy-to-follow method that players of Minecraft can use to construct their towns more rapidly and effectively.

Read Also: How to Make a Trapdoor in Minecraft

How to Build a City in Minecraft

The following are some suggestions for constructing a city in Minecraft: The first step for players is to establish a base of operations. Players require a safe haven for their belongings and a comfortable bed whether they want to reside in the city or not. It’s recommended that players select a location on the map where they’ll have lots of room to grow their city over time. Upon deciding upon a prime spot, the next step is to open for business. If the base of operations is only temporary, there is no need for it to be attractive or in keeping with the local culture. While the city as a whole will benefit from a consistent aesthetic, the home base is a great place to start.

The process of building something of significant size typically involves a lot of trial and error. It’s possible for players to test a layout and discover it doesn’t perform as intended. You can think of this as a step along the way. The player’s base should serve as a trial run for the remainder of the city’s structures in Minecraft. Bear in mind that creating a city in Minecraft is a massive undertaking. Players should set aside a significant chunk of time and gather a variety of resources in preparation. It’s crucial in Minecraft to have easy access to food without having to venture outdoors. One strategy for ensuring a steady supply of food is to construct several farms. Creating farms devoted to growing wheat, cattle, or chickens is relatively simple. Barns can be constructed on player farms for housing cattle mobs or for use as a general storage facility.

Farms, which can be as large or little as the player wishes, take up a lot of space and are a great investment for anyone looking to grow their city. In Minecraft, it’s helpful to have access to food without having to venture outside the game world. Players should construct several farms to maintain a steady supply of food. Farms devoted to raising wheat, cattle, or chickens are particularly simple to establish. Farms can also be used by players as a site to construct barns for housing cattle mobs or as a general storage facility. Farms, which can be as large or little as the player wishes, are a great asset to the city because of the space they require. One technique to bring a city to life after some foundational buildings have been erected is to lay down roadways or walkways connecting them. The addition of streets to a Minecraft city greatly improves its realism.

These routes may also be one-of-a-kind. The gaps between buildings are often filled with stone or wooden slabs that serve as streets for many Minecraft players. Others go for a more realistic aesthetic by modelling their streets after actual ones. The realism of a Minecraft city can be found in its finer points. The streets of the city can be lit up at night with the help of street lamps that players can place along the streets to make them more unique and realistic. Putting up signs throughout the city is another way for players to make it feel more lived-in. These can be anything from signage that help visitors find their way around to messages of warm welcome.

Cities aren’t complete until they’re decorated, after all. Flowers and gardens of any kind can be used by the players. There are many different kinds of decorating blocks in Minecaft, such as banners, that can be utilised to make a city look nicer.

In addition, players have the option of creating several modes of transportation for use within their city. Transportation options include rails and minecarts, boats on water or ice, and even a horse and saddle. Making it possible to roam around the city will provide life and activity, especially for those playing on a shared-world platform.

What does a Minecraft city need?

It is highly likely that a large Minecraft city will require a core region. This may take the form of a small town hall or a massive edifice serving as the capital of the state. Building something with this capability is another approach to add realism to a Minecraft city. This may be said regardless of the situation.

How can I get SMP earth?

There are two different ways to become a member of a nation. Either by asking for and accepting an invitation from the nation, or by using “/n join [Nation name]” if the nation is open and accepting new members. To establish a nation, you will need to have a minimum of $750 in the bank of your town. To begin creating the nation, type /n new followed by the nation’s name.

How can you make a country in real life?

A brand-new nation cannot be considered genuine unless it is first acknowledged by pre-existing governments that are part of the international community. There are a number of entities, such as Taiwan, Palestine, and Kosovo, that are recognised as legal nations by some countries, but not by others. This is because each existing state has the authority to bestow recognition at its own discretion.

How to Change the Host on Zoom Before Meeting