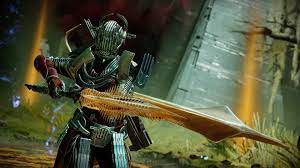 The item known as Lubrae’s Ruin may only be obtained as a reward from one specific fight in the Vow of the Disciple (VoD) raid. This glaive is the only other legendary variant available in Destiny 2, therefore it is certain that it will be a popular weapon. However, the only way for players to have a shot at grabbing this weapon is if they have already defeated the very last boss in the game. Lubrae’s Ruin has a chance of dropping only once during VoD, in contrast to other weapons from this raid, such as Destiny 2’s ‘Deliverance’ Kinetic Fusion Rifle. Other weapons have a chance of falling anywhere from two to three times during VoD. This weapon cannot be farmed in the traditional sense; instead, players can purchase rolls of this weapon from the final box in the Void of Despair after defeating the monster for ‘Spoils of Conquest,’ which are obtained via completing raid encounters and opening secret chests in raids. Players will need to have a little of luck in order for Lubrae’s Ruin to drop from the last raid encounter in order for this weapon to be able to drop from secret chests or be available for purchase from the final raid chest.

In comparison to the one and only other legendary glaive available in Destiny 2, Lubrae’s Ruin has the ability to roll with particular glaive exclusive qualities that its rival, the legendary ‘Enigma’ glaive, does not have. In addition to this, Lubrae’s Ruin has a solar glaive, which implies that it will be particularly effective in Nightfall’s and Lost Sectors with the Match Game modifier and Solar shielded foes. This weapon has the potential to roll with an exclusive glaive characteristic known as “Immovable Object,” which offers extra weapon energy to players who are standing still with their shields raised when an enemy projectile hits them. This enables players to block incoming fire for an unlimited amount of time, provided that they do not move during that time.

Read Also: How to Get Etheric Spiral in Destiny 2 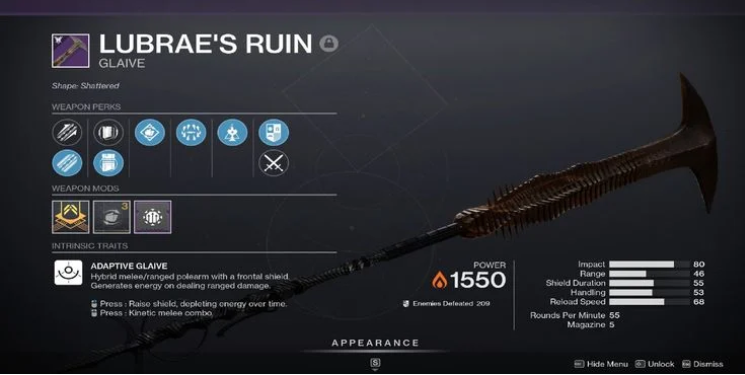 In addition to being a formidable weapon, Lubrae’s Ruin may be crafted using the revamped system for doing so available in Destiny 2. After a player has successfully extracted the pattern of the weapon five times, the associated weapon will become available at the crafting table. In order for players to gain the ability to construct weapons with Deep sight Reconnaissance, they will need to obtain the ability through drops of weapons that already have it. To our relief, it appears that one raid weapon equipped with Deep sight Reconstancy can be acquired in the raid’s final chest for the cost of twenty Spoils of Conquest each week.

Does swashbuckler work on glaive melee?

Damage-enhancing perks for weapons, such as Rampage and Swashbuckler, only apply to the ranged attack phase of the game. It is true that you are “striking things with the glaive,” but this is still just considered to be a melee attack and not a weapon attack. This is also the reason why it does not count as elemental damage or any of the other types of damage.

Does grave robber work on Glaive?

The combination of Grave Robber and Frenzy is a powerful one because it permits you to reload your Glaive after each successful melee attack while also providing a discernible increase in handling, reload speed, and damage.

How to Upgrade Spirit Ashes in Elden Ring

How to Mount and Extract ISO Files on Windows