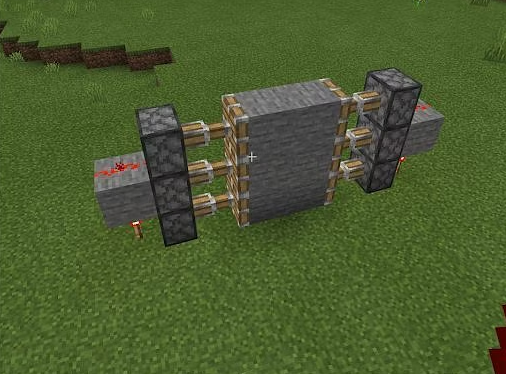 The use of hidden doors is the most reliable method for protecting your valuables from being stolen by other players in Minecraft. We are not talking about a door made of dirt that needs to be smashed in and reconstructed each time you want to access your hidden room. In the many years that Minecraft has been available, gamers have devised a wide variety of increasingly ingenious strategies for the construction of secret passageways. Sticky pistons are the key to unlocking a hidden door in Minecraft, and this article will show you how to achieve it. So let’s get started:

Read Also: How to Find your Minecraft Server Address on PS4

Although it doesn’t offer much in the way of discretion, a door that can be opened using pressure plates is quite practical. You may construct it out of the same material as your door in order to keep others from seeing it. If someone doesn’t stand on the plates, your door won’t be seen unless someone else does. The construction of such a door goes as follows:

1. Put two Sticky Piston blocks on top of each other in this configuration. 2. Build another Sticky Piston using the same two blocks, but this time place it four blocks away from the original one. 3. Next to each Sticky Piston tower, stack two Stone blocks on top of each other in a stacked formation. It should now be the case that there is a distance of two blocks between two identical structures. 4. It is necessary to equip Redstone Torches at the base of each Sticky Piston pillar. They ought to be positioned on the exterior of your entranceway. 5. The middle of each pillar should have a Stone block placed in it, directly above the Redstone Torches. 6. Dig a hole in the earth between the Sticky Pistons and under the Stone block building that is 2 blocks wide and 6 blocks deep. Redstone should be used to fill in the hole. 7. To conceal the gap, place grass blocks over the exposed portion of the hole. 8. Put a Pressure Plate on each side of the construction made of Stone blocks. When you step onto the Pressure Plates, the stone block structure will expand, revealing an entrance that serves as your “door.” 9. Construct a wall out of stone in any configuration you like around the “door” to conceal it. Be sure that the Pressure Plates are not covered in any way. In order to construct a piston door measuring 2×2 in Minecraft, players will need the following materials: Redstone dust, two redstone torches, four pressure plates, four sticky pistons, and eight blocks of their choosing for the framework of the structure.

What is a jib door?

A jib door is a secret door, although it is not all that secret. A jib door is a door in a formal room that does not fit in with the architectural character and layout of the room because of its position, size, or shape. As a result, the door is concealed within the decoration, and its position does not disrupt the proportion and character of the room.

How do you make a secret base in your room?

A simple approach to make more room is to drape a blanket over the back of a chair or off the side of your bed and let it hang there. In addition, having a blanket in your room will not make anyone who walks by your space suspicious. Make a hiding place for yourself out of pillows. You can build some walls by stacking some pillows and using heavy things to provide support for the frame.

How do you make a trap wall in Minecraft?

Simply cut a hole in the floor close to a wall in your home and fill it with dirt. Install a trap door over it, and then put a button on the wall next to it to activate the door. You can now release the safety latch on the trap door by pressing the button.