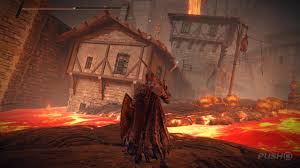 Elden Ring takes the tried-and-true gameplay of Dark Souls and transplants it into an expansive, visually stunning open environment known as the Lands Between. The Lands Between are home to a wide variety of ecosystems, ranging from treacherous bogs to rugged mountainous regions. These territories are home to vast landscapes and fortified strongholds that are teeming with lords, foes, and a wealth of history. One of these places is the Volcano Manor, which is situated on Mount Gelmir. The Volcano Manor is an optional legacy dungeon that serves as the home of Lord Rykard. Due to the fact that it is so interconnected, both the route to get there and the navigation of its interior can be somewhat challenging. In this piece, we are going to discuss the several routes that can be taken to go to the Volcano Manor in Elden Ring.

There are two different routes that players can take to reach the Volcano manor. The first will require you to complete a mission that would teleport you immediately to the manor, while the second will require you to travel the perilous road on foot or horseback. Both approaches are going to be discussed here. The completion of Rya’s quest line is the quickest and most convenient way to go to the Manor. In Liurnia, the land of the lakes, just in front of the ruins of Layskar, you’ll find Rya. Simply having a conversation with her will cause the beginning of her quest, in which she will inform the player about the man who stole her jewellery. It will be necessary for players to retrieve her necklace. To accomplish this, continue walking in a straight line while keeping to the left side of the road until you reach Boilprawn Shack. The crook will appear here and demand one thousand runes in exchange for the necklace. After handing over the money and giving Rya the necklace in exchange for it, players will eventually run into her again on the Atlus Plateau, at the very top of the Grand lift of Dectus. When players talk to her in this location, they will be instantly transported to the Volcano Manor in Elden Ring. Assuming you want to do things the old fashioned way, head to Atus Plateau. The Shaded Castle awaits you once you arrive. Its back leads to a bridge that leads into Mount Gelmir, where the Manor is located. It’s quite a hike to get to the Volcano Manor from here. Kill the Abductor Virgins you see up ahead at the first location of grace on Mt. Gelmir and go to the ladder in front of you. A tall siege and war camps await you at the top of the ladder; once you reach the top, continue straight until you come upon a scion guarding another ladder. Eliminate the young heir and advance up the corporate ladder. Find a helpful merchant and additional ladders here. If you make it to the top, you can cross a bridge to a place where grace and spirit jump off the page. Get some shut-eye at the holy ground and then make the leap of faith. Here you’ll face a Full-Grown Fallingstar Beast, an extremely powerful boss that you can (and probably should) ignore for the time being. To reach the Volcano Manor, make your way to the right side of the boss arena, where you can see the area below, and then descend the ledge and continue along the road.

Is Completing The Manor Necessary?

Mount Gelmir and the Manor are not required to complete Elden Ring; rather, they are both optional sections. Because it is the residence of a demigod and because it is a very interesting region to explore, the manor is still considered a legacy dungeon. Even though participation is not required, it is one of the most important aspects of the game.

What Is The Recommended Level For The Manor?

Although experienced players of approximately level 50 can easily take on the Manor and Mt. Gelmir, the ideal level range for the area is between 60 and 80. Players who have already vanquished Caelid are encouraged to try their luck in Gelmir, per our recommendation.

You should definitely consider becoming a member of the Volcano Manor. This decision will primarily result in two different outcomes: If you decide to become a member, you will be given the Drawing Room Key, which will allow you to begin the questline.

How to Unlike All Songs on Spotify