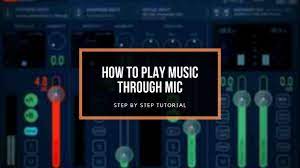 Have you ever been curious about how YouTubers include music into their videos by using a microphone? This has been fairly famous among YouTubers, but it has also gotten quite popular among gamers as well. If you’ve been looking for information on how to play music through a microphone, or if you’ve tried several methods without success, you’ve arrived at the right place. It will be discussed in this article how to play music through your microphone in games and on discord.

Read Also: How To Stream HBO Max On Discord

How to Play Music through Mic on Discord

To achieve this, go to your computer’s ‘Control Panel’ >> select ‘Sound’ and then click on the ‘Recording’ tab >> then click on the ‘Record’ button. Enable the ‘Stereo mix’ feature and then select the default microphone. If you do this, you’ll be prepared to connect the music bot to your discord server and begin playing music through your microphone >> Then go to this cool discord bot website and click the ‘Add to discord’ button >>.. Select a server, click on ‘Authorize,’ and then tick the authorization checkbox. With the ‘-play’ option, you may tell groovy whatever music you want to play without having to type anything.

It is also possible to play music over the mic on discord by modifying your user settings in the discord application. To accomplish this, follow these steps:

All done, this should help you play music through mic on discord.

You can use soundboard programmes such as Clownfish, MorphVox, and Voicemeeter, as well as Soundbar, to play music over your microphone on Discord. Take the following steps:

How to Play Music through Mic in Games

One of the most straightforward methods for playing music over the microphone in games is to make a few changes to the game’s settings. To begin, open the ‘Control Panel’ on your computer and click ‘Sound’. Next, open the ‘Recordings’ tab and enable the ‘Stereo Mix’ option, as well as making it your default microphone.

How to Remove Filters and Effects from Photos on iPhone

How to Counter-strafe in Valorant