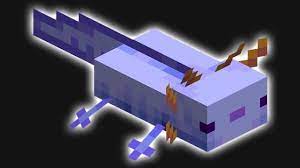 The Blue Axolotl in Minecraft was inspired by the Water-type Mudkip in Pokémon. The Blue Axolotl’s low spawn rate makes it unusual. Indigo-colored Axolotls have a 1 in 1,200 or 0.083% chance of being bred.

Since Blue Axolotls spawn so rarely, Minecraft players may want to find another way to get them. Both the Java and Bedrock Editions of Minecraft have terminal commands for this. Bedrock Edition includes the Windows Store, mobile, PlayStation, Xbox, and Nintendo Switch versions of Minecraft. Console instructions require cheats in any Minecraft version, deactivating world achievements. Those seeking achievements must breed Blue Axolotls organically, while others can use console commands.

Read Also: How to Make a Trapdoor in Minecraft

How To Spawn a Blue Axolotl in in Minecraft Using the “/” key to launch the command console is the quickest way to create a Blue Axolotl in Minecraft Java Edition. When starting to type a Minecraft command, players must always preface it with a “/,” but pressing this key first will add the prefix for them. The command “/summon minecraft:axolotl Variation:4” will summon a Blue Axolotl variant. The user may have to pan and tilt their camera to locate the Axolotl if it does not spawn in front of them. If you’re playing Minecraft on the Bedrock Edition, you can summon a Blue Axolotl by visiting the Chat and Commands menu and typing “/summon axolotl minecraft:entity born.” A Blue Axolotl ought should materialise after a few minutes. Further, Java and Bedrock should remember that Axolotls can’t survive for long without water. This cute animal needs to swim, so make sure it spawns near some water.

What is the fastest way to spawn a blue axolotl?

Players have three options for acquiring a blue axolotl: they can breed them, they can find one in the wild, or they may use spawn eggs. Enabling cheats and executing the appropriate console instructions to spawn a blue one is, however, the method that is by far the most straightforward.

Are cyan axolotls rare in Minecraft?

The infant axolotl has a one in 1,200 chance of inheriting the coloration of the blue variation, which is extremely rare; otherwise, it will acquire the coloration of either of its parents at random. Babies imitate the behaviours of adults and reach maturity in twenty minutes.

How rare is a gold axolotl in Minecraft?

Rare. Because it only has a spawn rate of.8%, a rare Axolotl colour variation can be incredibly challenging to find. It might take some time to find one in the wild, but if you breed them, the procedure might go more quickly.

What is a Lucy axolotl?

There is a species of salamander known as the Lucy Axolotl (Ambystoma mexicanum), which is particularly unusual since it spends its entire life in the “larval” stage. It never adapts to living on land and instead remains an aquatic creature with external gills during its whole life.

Is there a green axolotl in Minecraft?

In addition, they do not generate organically in the Bedrock edition of the game. On the other hand, in the Minecraft live 2020 video, they displayed an axolotl of a different color—one that was green. Unfortunately, the Green Axolotl was not included in the version of Minecraft that was made available to players all over the world.

How to Open Engrams In Destiny 2

How to Take Zoom Meeting Screenshot on Desktop