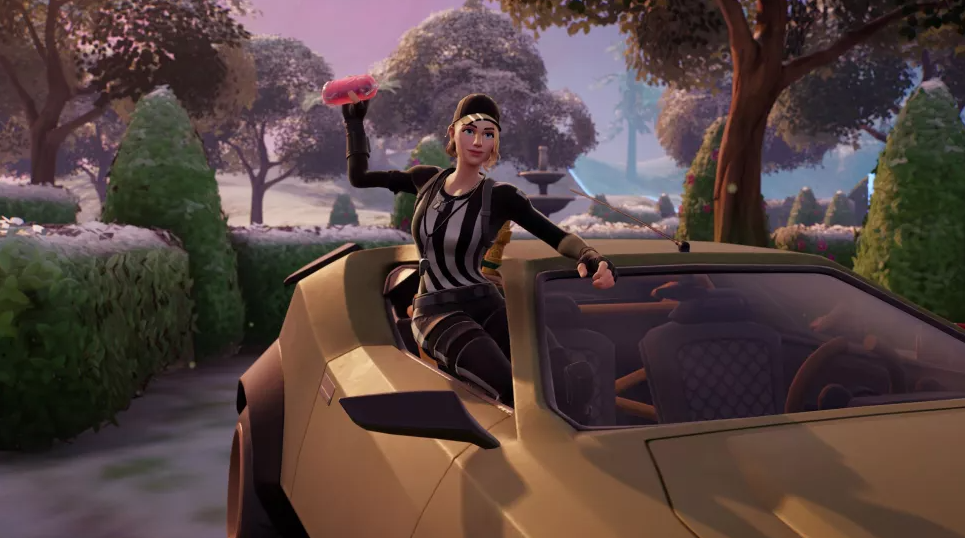 During the event that was known as Fortnitemares, Candy was made available as a loot item on the island for the first time in quite some time. Unfortunately, the “trick or treat” option is not one that players may select from when playing the game. Despite this, candy can be utilised in-game to briefly improve a player’s stats if they are consumed, and this can be done in a variety of ways. There are six unique varieties of sweets, and the consequences that are triggered by eating each one of them will vary greatly from the others.

If a player is able to successfully toss Candy from a moving car, they will be rewarded with 15,000 experience points. The following is the process that needs to be followed in order to finish the work.

Read Also: How to Tame Chickens in Fortnite

1. Locate or purchase some candy

There are primarily two ways that one might go about acquiring the many different varieties of sweets that are available. The first method can be done for no cost at all, and it entails either sifting through Jack-o’-lanterns or destroying them in some way. They are easy to identify and may be discovered in copious amounts all around the numerous POIs on the island. This task can be attempted at Rocky Reels, which is a practical spot for doing so because of its proximity to the starting point. The second strategy entails prospecting for gold and putting in some effort in the form of legwork. Candy may be bought from non-playable characters (NPCs) in Fortnitemare, such as Chrome Punk and Curdle Scream Leader. In order for the players to get some of them, they must first locate them and then interact with them.

After Candy has been acquired, the next round of the challenge entails locating a vehicle of some kind. The player has the option of selecting from one of four distinct classes of vehicles. Given that the task does not require the participant to move around, even the sluggish Mud Flap truck will do. Despite the fact that vehicles may be found all across the island, individuals who participate in the challenge at Rocky Reels can find a few of them in the immediate area. Players will have a relatively easy time stealing vehicles from this site, despite the fact that certain matches take place in an unsafe environment.

3. After getting into the vehicle, move across to the passenger seat.

Once a vehicle has been found, it is vital that the area around it be made safe in order to avoid being fired at by snipers or ambushed by another group of attackers. It is recommended that you build a wall or drive the vehicle into a tight corner in order to avoid being seen. There is a greater possibility of your survival in the event that your opponents launch an attack. If there is a gunfight going on in the area when you have finished gathering all of the Candy, you should leave the point of interest as quickly as you can if there is still a threat to your safety. There is no point in putting oneself in danger by taking chances and getting shot at because it won’t accomplish anything. As soon as a trustworthy location has been identified, it is time to proceed to the subsequent stage of the process.

4) Choose Candy from the inventory, line up your shot, and release it After figuring out the trajectory and range of the throw, the next part of the challenge is to toss the candy into the air and measure how far it travels before moving on to the next step. It is most likely in your best interest to pick up the Candy after you have tossed it; however, the kind of Candy that was obtained for the challenge will influence whether or not this is actually the case (especially if it was paid for using gold).

What is the best way to fix Fortnite on a car?

To repair damaged vehicles, players will need to make use of a repair torch. This utility item was first introduced in Fortnite Chapter 3 Season 2 and has the ability to repair metals and vehicles.

What does the candy do in fortnite?

During the yearly Halloween event known as Fortnitemares, candy can be found on the island players explore in Fortnite. In Fortnite, locating candies in various areas and then eating such candies will provide you a range of boosts that you can use to eliminate other players that are in your way or to flee from them.

In the game of Fortnite, how many health points does a Lambo have?

As soon as you begin attacking the Klombo, it will immediately become hostile toward you and start firing projectiles from its blowhole. In the event that you mistakenly enrage a Klombo, it is not recommended that you attempt to kill it because they are quite impossible to bring down. The Fortnite Wiki states that the Klombo has a total of 2,000 HP, making it one of the most dangerous enemies in the game.