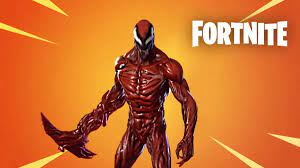 You can’t say that Carnage is the first Spider-Man villain to appear in Fortnite. Venom was first seen in the Marvel Knockout Super Series last year. However, the Carnage skin is not part of a limited-time event; it is included in the Fortnite Season 8 Battle Pass. This means that in order for gamers to have a chance at receiving the skin, they will need to pay for the Battle Pass. From there, it’s up to the user to decide whether they’d rather spend even more money to receive the skin quickly or put in a lot of effort to get it through normal gameplay.

The Carnage skin becomes available at the end of the Season 8 Battle Pass. Given these stringent conditions, it’s evident that the producers of Fortnite are aware of just how popular Spider-Man is, since players have reproduced one of the character’s most recognisable memes in the game. That Carnage is the Season 8 Battle Pass Level 100 skin makes sense, given how popular the skin was sure to be.

Read Also: How to See Footsteps in Fortnite

How to Unlock Carnage Skin in Fortnite If you have the Fortnite Season 8 Battle Pass, look on page 10. There you’ll find the Carnage skin. In order to access the last page of the Battle Pass, players must first reach level 90, or they can earn reward tiers worth 90 points. Players must reach this level and then earn nine Battle Stars to obtain this skin. To finish up, you’ll need to unlock Carnage’s glider, pickaxe, contrail, back bling, sprays, and a loading screen before you can use the skin.

Daily, weekly, and character punchcard challenges are the quickest method to go past these checkpoints. The only option to get the skin sooner is to pay real money to have it unlocked. The entire cost for gamers is roughly $80-$90 USD (14,000 V-Bucks). All of the Battle Pass cosmetics, including Carnage, will be available to players until the end of Season 8 on December 5, 2021. Without a doubt, the never-ending stream of licenced characters doesn’t help clarify Fortnite’s backstory. The red-suited villain who has long opposed Spider-Man is simply another popular crossover skin in a game that has gained a global fan base. The Carnage skin and other popular characters, however, provide gamers a good reason to keep spending time into the game even if they already enjoy it.

What level do you have to be on Fortnite to get Carnage?

Obtaining the Carnage Skin in Season 8 of Fortnite

If you have the Fortnite Season 8 Battle Pass, look on page 10. There you’ll find the Carnage skin. In order to access the last page of the Battle Pass, players must first reach level 90, or they can earn reward tiers worth 90 points.

What tier is Carnage?

The Tier 100 Skin, or the very last skin you’ll be able to earn on the Fortnite Season 8 Battle Pass is Carnage. You can gain access to this by claiming 90 awards or reaching Level 90 during the current season. Venom’s major enemy, Carnage, is a Symbiote.

How long is Carnage in Fortnite?

The island has been impacted by the landing of two canisters. Bonding with either the Carnage or Venom Symbiote will put you in the middle of a fierce struggle for survival. On October 18th, the Symbiotes will depart from the Island. Players will only have a little more than a week to say their final goodbyes before Epic Games locks their accounts away forever.

How much is the Carnage skin?

How To Ignite Structures in Fortnite