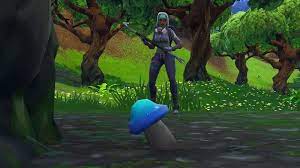 The season-ending event for Fortnite took place over the weekend, and several adjustments have been done to the island that is used for the battle royale mode now that Season 8 has begun, which is appropriately called Cubed. The method by which players complete the weekly missions and challenges in Fortnite is one of the aspects that have been updated. Fortnite players will need to talk to an NPC at least once and finish each of their quests before they can begin an NPC’s storyline questline. Here;s The Best Places to Look for Mushrooms in Fortnite

Read Also: How To Ignite Structures in Fortnite

How to Find Mushrooms in Fortnite Fortnite players looking for an easy location to gather mushrooms could travel to the Weeping Woods point of attraction, which is located in the southwestern part of the game’s map. The blue mushrooms are found in the northern part of the area, by the river, and are just lying around on the ground there, waiting to be picked up by the players. When the players come across the mushrooms, they have the option of either eating them or simply collecting them for later use. In either case, as long as two mushrooms are discovered, the task will be considered finished, and the players will be required to continue the quests from Madcap. As there is a possibility that other players will show up to accomplish the quest as well, players should be ready with at least one respectable pistol and preferably two, just in case there is any kind of conflict that arises. The process of gathering mushrooms shouldn’t take players very long at all, but it’s best to be well-prepared just in case.

The Sideways is the name of the new region that has appeared on the island as a result of the other changes that have taken place. A large red circle indicates the location of this place on the map; it varies from game to game and, for example, the Abductors appeared here during Season 7. It is possible for players to acquire rare items known as Sideways weapons if they venture inside The Sideways. However, these areas also contain a large number of foes, so players will need to watch their backs as they search the low-gravity zone for chests and other items of value.

Where are the mushrooms in season 8?

Sludgy Swamp is yet another fantastic place in Fortnite Chapter 2 Season 8 where players have the opportunity to find mushrooms. They have to travel across the POI as well as the river in order to get to the little island with the treehouse on it. Two mushrooms can be found in the area close to the treehouse; obtaining them is a requirement for moving on to the next step of the Mushroom Master questline.

Where are the mushrooms?

When were mushrooms added to Fortnite?

In Fortnite: Battle Royale, the Mythic Mushroom is a consumable item that may be found through exploration and can also go by the name The Golden Mushroom. It was included in Chapter 2: Season 3 earlier this year.

Is the dancing mushroom real?

A polypore fungus, Grifola frondosa, also known as hen-of-the-woods, maitake (, “dancing mushroom”) in Japanese, ram’s head or sheep’s head, grows at the base of trees, particularly old growth oaks or maples. Other common names include ram’s head, hen-of-the-woods, and sheep’s head. It is most common between the end of summer and the beginning of fall.

How to Make a Barrel In Minecraft