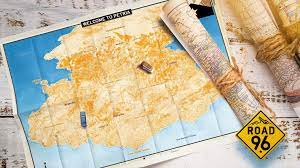 Everyone, welcome to the site. Here at DigixArt, we have some very exciting news to share with you: On April 14th, Road 96 will be available on PlayStation 5 and PlayStation 4. Customize your own cross-country excursion.

You take on the role of a group of youngsters leaving a fictional nation named Petria in this pick-your-own-road-trip adventure. Some individuals will aid you in your escape, while others will try to stop you from leaving.

Our goal with Road 96, which we began developing in 2018, was to create a procedurally generated tale that would be unique each time it was played by a new user. “Nobody’s route is the same,” was our motto. We worked on a variety of prototypes in order to establish a system that would allow players to experience a unique and interesting tale based on their own preferences. As a result, the game begins by asking you a series of questions about yourself.

Your starting position, talents, money, and (yes, there is a secret karma factor) are all determined by these characteristics. Once you’ve completed the first sequence, you’ll be given the option of how to exit. For the most part, the branching system is not a linear one, but rather a collection of sequences that the AI will select and adjust based on your travels.

There are several ways to get about. If you want to travel on foot, it will take more time to get to the border. Depending on your decisions and actions during your travels in the summer of 1996, you will trigger one of the numerous endings, since time does not stand still.

The brilliance of a procedurally generated system lies in the fact that no two characters’ pathways are ever exactly the same. The identical path being taken by each of your characters is nearly impossible mathematically (which makes us really happy).

To top it all off, it’s very hard to follow the same path as another player with all the various characteristics. Without taking into consideration all the various variants within each sequence, the number of distinct variations would come out to 60x59x58.x.

Due to the fact that each scenario might take place in either the southern deserts or the northern highlands, we had to produce unique images for each location – as well as day and night settings – resulting in four times as much work for the art team.