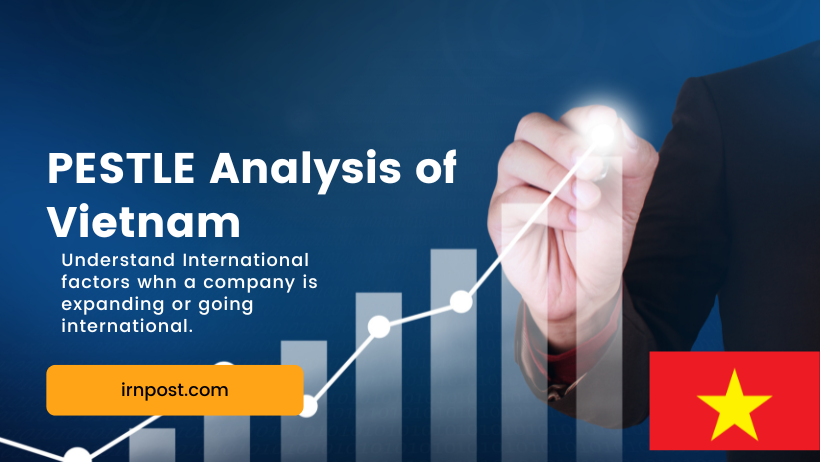 In this article we will have a look on Political, Economic, Social, Technological and Enviromental factors that can affect to a company when it is expanding in Vietnam. So lets look into the PESTLE analysis of Vietnam in 2022.

The Communist Party of Vietnam is the ruling party in Vietnam and has been so since the country’s reunification in 1976. The country is a one-party state, with the president holding ultimate power. The prime minister and the Council of Ministers make up the government.

Bribery and Corruption are big problem

Bribery and corruption are unfortunately still common in Vietnam, so you may encounter it or hear about it taking place in many different forms. These can include facilitation payments (i.e. bribes), as well as giving and receiving expensive gifts to try and build business relationships.

The political landscape in Vietnam is relatively stable, with the Communist Party maintaining a firm grip on power. The country has seen economic reforms in recent years, which have helped to boost growth and attract foreign investment.

Vietnam is a lower-middle-income country with an economy that is growing rapidly. GDP growth was 8.0% in 2021 and is expected to remain strong in the coming years.

The country’s main exports are petroleum, textiles, and seafood. Its main trading partners are China, Japan, and the United States.

Vietnam is a developing market economy in which the role of the state is increasingly becoming more important. In recent years, the Vietnamese government has implemented a number of reforms aimed at stimulating economic growth and attracting foreign investment.

One of the most significant reforms has been the introduction of a new foreign investment law, which came into effect in 2015. The law provides a number of incentives for foreign investors, including tax breaks and preferential treatment in land allocation.

In addition, the government has also been working to improve the business environment by streamlining regulations and procedures. These efforts have helped to make Vietnam an increasingly attractive destination for foreign investment.

The Vietnamese economy is driven by a number of factors, including agriculture, manufacturing, and services. Agriculture accounts for around 21 percent of GDP and employs around 45 percent of the workforce. The country is one of the world’s leading exporters of rice, coffee, and seafood.

Manufacturing also plays a significant role in the economy, accounting for around 28 percent of GDP. The country has a number of large industrial zones which are home to a number of foreign-invested companies.

The population of Vietnam is around 98 million people. The majority of the population is ethnic Vietnamese (88%), with minority groups including Chinese (5%), Khmer (3%), and Hmong (2%).

The official language is Vietnamese, although English is also widely spoken. Buddhism is the predominant religion, followed by Catholicism and Cao Dai.

The following are some social factors that may have influenced the development of Vietnam:

Vietnam has made significant progress in recent years in terms of its technology infrastructure. The country has a relatively high level of internet and mobile penetration, and is continuing to invest in its digital infrastructure.

As a country undergoing considerable development, Vietnam has many technology-based factors working in its favor. These include a robust and growing telecommunications sector, an increase in Internet users, and a rise in software and hardware exports.

Vietnam’s telecommunications sector is one of the most rapidly expanding in Asia. The number of fixed-line subscribers has quadrupled over the past five years, and the number of mobile subscribers has increased more than tenfold. Software and hardware exports have been growing at a rapid clip as well.

Vietnam’s technology sector is expected to continue to grow at a rapid pace in the coming years. This growth will be driven by continued investment in telecommunications and Internet infrastructure, as well as by the expanding capabilities of Vietnamese companies in the software and hardware sectors.

Vietnam is vulnerable to natural disasters such as floods, typhoons, and earthquakes. The country has also been affected by climate change, with rising sea levels and more extreme weather conditions.

There are some general trends that can be observed in how businesses are affected by the environment in Vietnam.

One of the most notable ways in which businesses are affected by the environment is through changes in weather patterns. For example, businesses that rely heavily on agriculture may be adversely affected by droughts or floods. In addition, businesses that are located in coastal areas may be impacted by typhoons and other severe weather events.

Another way in which businesses can be affected by the environment is through changes in the availability of raw materials. For example, if there is a sudden shortage of a particular raw material, this could cause disruptions in the supply chain and ultimately lead to higher costs for the business.

Finally, businesses may also be indirectly affected by environmental issues such as climate change. For example, if there is an increase in temperatures, this could lead to a decrease in demand for certain products (such as air conditioners) or a change in consumer spending patterns. In addition, climate change could also impact business operations in other ways, such as through an increase in the frequency of natural disasters.

Overall, it is difficult to say definitively how businesses are affected by the environment in Vietnam. However, it is clear that the environment can have both positive and negative impacts on businesses, depending on the specific business and sector. Businesses should therefore keep abreast of environmental developments in Vietnam in order to minimize potential risks and take advantage of any opportunities that may arise.

The legal system in Vietnam is based on the civil law system. The country is a member of the World Trade Organization and has signed a number of free trade agreements, including with the European Union.

1. The legal system in Vietnam is still in its early development stages, and there are many areas where the law is either not well-defined or not well-enforced. This can create significant risk for businesses operating in Vietnam, as they may be subject to arbitrary decisions by government officials or courts that are not based on clear legal principles.

2. The Vietnamese government has been gradually increasing its control over the economy in recent years, and this is likely to continue. This can create difficulties for businesses, as the government may interfere with their operations or impose new regulations that they must comply with.

3. Corruption is still a major problem in Vietnam, and businesses may find themselves having to pay bribes or givingkickbacks in order to get approvals or licenses from government officials. This can add significant costs to doing business in Vietnam.

4. The Vietnamese legal system does not recognize many of the common legal structures that businesses use in other countries, such as limited liability companies and joint ventures. This can make it difficult for businesses to establish themselves in Vietnam and may limit their ability to raise capital from foreign investors.

5. The Vietnamese government maintains a high level of control over the economy, and this can make it difficult for businesses to operate freely. The government may also nationalize businesses or expropriate their assets for economic or political reasons.

Vietnam is a country with strong economic growth potential. Political stability, increasing foreign investment, and improving infrastructure are all positive factors for the economy. However, the country faces challenges such as natural disasters, climate change, and a lack of skilled labor.

How to Reinstall Netflix on Your Samsung Smart TV