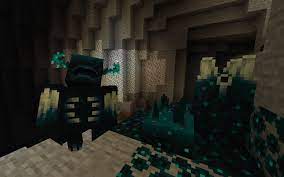 Even though Minecraft is a survival game, its developer, Mojang, isn’t above transforming the game into a survival horror experience. They are the terrifying and bloodthirsty Wardens, who will inhabit the future Deep Dark subterranean biome. They are eyeless creatures that appear to be concerned with maintaining the deathly silence of the underground environment.

Wardens are attracted to vibrations and the shrieks of their Sculk brethren, and they will crawl out of the earth to attack anything that they come across. Because they come charging out and simply slaughter anything they come across, it is quite horrifying. Wardens can track you down not only through vibrations in Sculk, but also by scent: they’ll sniff about to locate where you are. If you happen to crash with them, may God be with you.

The most reliable method of summoning a warden is to stomp on the spreading fungus goop that is Sculk, allowing the vibrations to reach the bony hands of a nearby Sculk Shrieker, which will then call for help. When there are enough shriekers, a Warden will arrive. As soon as the Warden comes, it inflicts a new state known as darkness on you, which causes the world to become increasingly dark to you: this results in more creatures, as you might expect.

These survival bosses are gruesomely powerful and lethal, as befits a survival boss who should be avoided rather than fought—which is exactly what they are. Indeed, they have the most health and damage of any naturally-spawned monster in the game… and they have the added bonus of disabling any shields they come into contact with while doing so. (Golems, prepare to get your hearts ripped out.)

The SSDs of the future will be so fast, they might need active fans