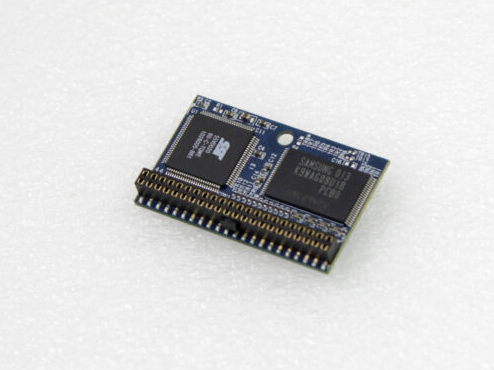 You call yourself a fan of free and open-source software, don’t you? Are you using your old ThinkPad to run GNU/Linux, thereby avoiding devices that require binary blobs? Do you also have LibreBoot installed? Not bad, not bad. You may be wondering about the hard disc. Can you say for certain that some of your liberties aren’t escaping through that spinning rust?

The decision to release it under the GNU Public License version 3 rather than an open hardware licence may at first appear to be a weird choice; nevertheless, it turns out that this is indeed the choice that the GNU project advises for circuit designs at this time. Which brings us back to the topic at hand, which is nothing more than a KiCad-drawn schematic of a circuit. It is not necessary to use firmware, and the printed circuit board (PCB) contains very few components other than the four BGA152/BGA132 NAND flash chips and the SM2236 controller IC.

After having the circuit board made and acquiring (or salvaging) the necessary chips, your vintage laptop will immediately be outfitted with the most cutting-edge technology available for mass storage. So how does it work? The SM2236 is a CompactFlash (CF) controller, and because the interfaces for IDE drives and CF drives are so comparable, the PCB doesn’t need to make many adjustments in order to switch from one to the other. You’ve got yourself a native solid-state drive (SSD) that’s suitable for use in older computers if you toss in some NANDs.

According to [dosdude1], the board has the capability of accommodating four 64 GB chips, which, taking into account the age of the computers in which this component would most likely be placed, ought to be more than sufficient. However, there are a couple caveats: the NAND chips must be supported by the SM2236, and they must all be compatible with one another.