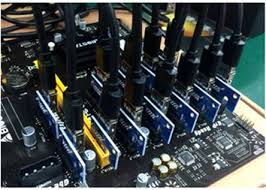 A total of 11 PCIe 3.0 x1 slots are available on the TB560-BTC PRO motherboard, which is capable of supporting up to 12 graphic cards and is designed to extract the maximum performance possible from modern-day graphic cards used in mining operations. Additionally, it includes a faster PCIe 4.0 x16 Slot, allowing customers to get the most out of a single GPU while being supported by Intel’s 11th Generation Core CPUs, which can operate at the highest level with relative ease.

Mining using GPUs has reached an all-time high, with more and more computers being added to the blockchain on a daily basis. These entrepreneurs are the target market for BIOSTAR, which aims to provide them with the greatest hardware available at the most excitingly low prices.

The new TB560-BTC PRO mining motherboard is durable and focuses on obtaining the most performance from its components. It is designed to be functional at its core. The TB560-BTC PRO is equipped with two DDR4 Dual Channel RAM slots that can handle clock rates of up to 2933MHz, a Realtek RTL8111E LAN chipset, and a plethora of storage choices, including a single M.2 (M Key). It is capable of handling any high-load duties that are thrown at it.

In addition to its full-ATX form size, the TB560-BTC PRO motherboard includes a typical back I/O panel that is equipped with all of the necessary ports for a mining business or a home-built PC. For customers who want to connect classic peripheral devices, it has a single PS/2 Keyboard/Mouse Port. It also has an abundance of USB connections, which include four USB 3.2 Gen1 connectors and two USB 2.0 ports.

The combination of an HDMI 1.4 connector and a single VGA out port results in crisp, crystal-clear picture quality. Because of the inclusion of three high-end audio output ports powered by the Realtek ALC897 chipset, the TB560-BTC PRO motherboard becomes a very feasible choice for building that next-level HTPC system that delivers an incredible audio-video experience.

The SSDs of the future will be so fast, they might need active fans

How Technology Can Bring Your Home into the Future