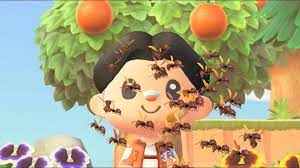 Ask Blathers from Animal Crossing: New Horizons, and he’ll tell you that wasps are among the most terrifying creatures on the earth. The well-informed curator despises many kinds of insects, but her level of disdain for wasps surpasses that of any other insect she has encountered. When you shake trees in New Horizons to harvest fruit, gather sticks, or seek for furniture that has been oddly imprisoned in its branches, you will, unfortunately, come across a good number of wasps. You will come across your fair share of wasps in New Horizons. However, rather than escaping and hiding from them, why not make an attempt to catch them?

Read Also: How to Make Paths in Animal Crossing

Wasps are not difficult to capture, but you will need to come prepared for the challenge. When you are shaking trees, it is imperative that you have a net in your hands at all times. If you don’t have it, you won’t have enough time to grab it out of your inventory before an angry horde of wasps attacks you, unless you have great reflexes.

You’re shaking some trees, when all of a sudden, a wasp’s nest falls to the ground. You’ve got your net all set up. First and foremost, you need to keep your composure. The vast majority of gamers will almost instantly begin to pull back on the analogue stick in an effort to sprint in the opposite direction. If your goal is to capture the wasps, you should in fact perform the complete opposite of what you are currently doing. It is preferable to do nothing more than stand there in the majority of situations. When a wasp nest falls from a tree, your villager will instinctively turn their head to gaze at the horrifying scene that has just occurred in front of them. This implies that if you have your net out — which you should! — the majority of the time, all you need to do to swing it in the direction of the pest and catch them is press the “A” button on your keyboard.

However, depending on how you are positioned in relation to the tree and where the wasp nest ends up falling, you may need to take a step back in order to prevent your net from colliding with the tree. If this is the case, simply take one or two steps away from the tree before turning around to look at the nest and the swing again. If you go much further, you won’t have enough time to respond to the situation. This is a helpful trick for a couple of different reasons. To begin, you will frequently find that you are out in the bush, where there is no way to get away from the unpleasant insects. Second, the museum’s collection cannot be considered complete without the inclusion of the wasp in its catalogue. That means you’ll either have to face the terrible illness sooner or later, but at least you’ll be ready for it when the time comes.

Which trees have wasps Animal Crossing?

In every game besides New Leaf, wasp nests may only be obtained from Hardwood or Cedar trees. In that game, however, any tree can produce a nest. Beehives are able to be picked up and sold in New Leaf for a price of 500 Bells.

How often do wasps spawn in Animal Crossing?

In this game, you will only see five beehives spawn each day, and there will only be one every acre. The moment a player steps on one, they will be instantly pursued by a swarm of bees, after which they will present a frightened expression at the sight of the bees. The only way for the player to get away from them is to either lure them into a net or get inside a building.

Can you farm wasps in Animal Crossing?

If you only want to raise wasps for the purpose of making money, you should climb a tree and then stand in front of it. First take the net off, and then give the tree a shake. In the event that there is a nest, it will crash to the ground right next to you, and your character will rotate to face it. Swinging the net around is all that is required to catch the wasp in question.

What do the bubbles in the ocean mean in Animal Crossing?

While you are swimming around, you could notice columns of bubbles floating up from underneath the waves. If you position yourself properly while swimming straight over the bubbles and hit Y, your character will dive beneath the water and, if you positioned yourself correctly, come back up with a sea creature such as a sea star or a sea anemone.