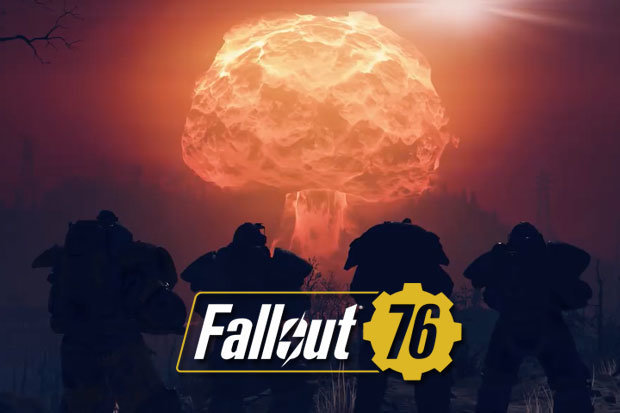 I am Become Death is the final quest of the Fallout 76 Enclave faction series is given automatically after you’ve completed the Officer On Deck process in the previous quest, One of Us.

In this quest, you will learn how to launch a Nuclear Missile out of a Silo and nuke an area of the map. The rewards you will get for completing the quest are as mentioned below:

Return to the Whitespring Bunker and once inside go towards the Enclave military wing. Since you have earned the rank of General, you can now access the Whitespring Command Center. 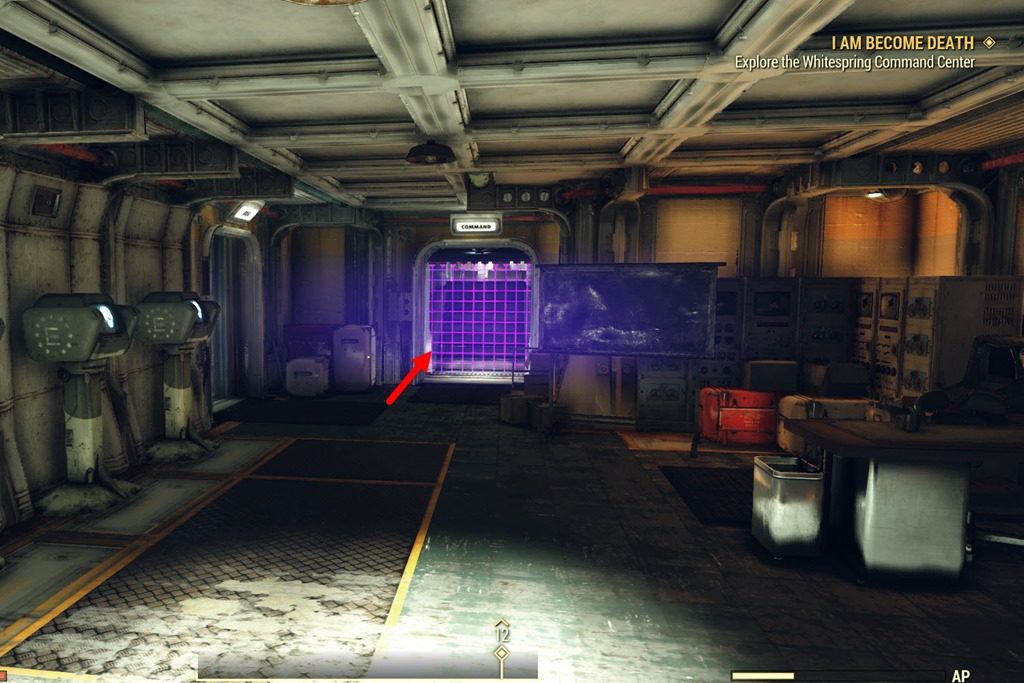 Now you will see some posters and buttons on the wall teaching you the basics of the whole nuclear launch system. 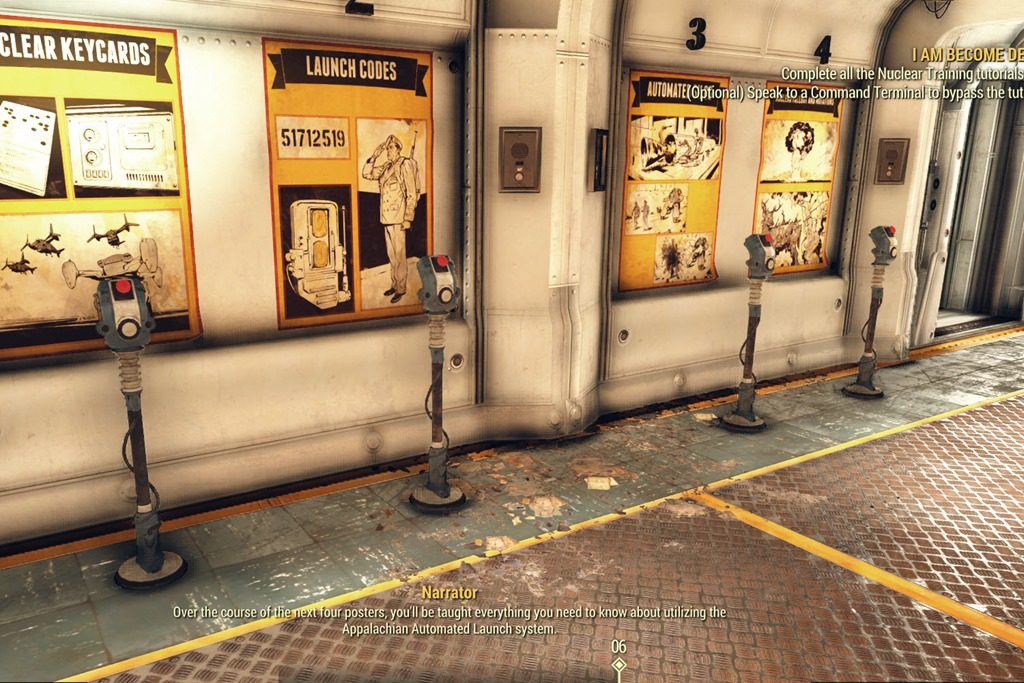 Interact with the red and green pins on the map in this room to update your map with locations of the missile silos and the fissure sites. 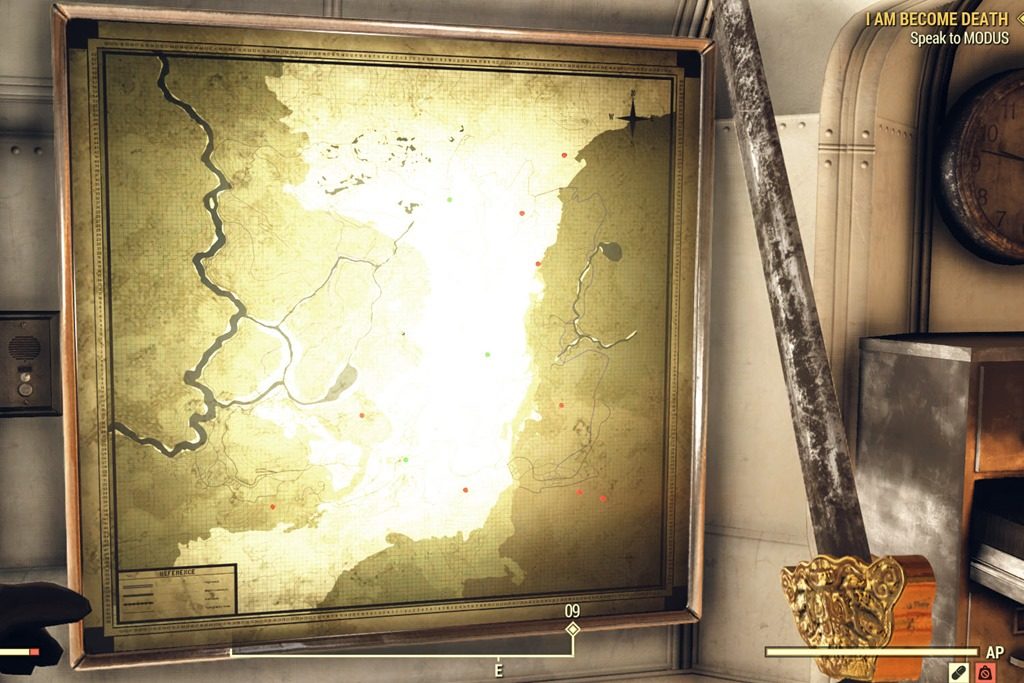 Take your time and listen to what MODUS has to say, otherwise, you can talk to one of the terminals located in the command center.

Access the Surveillance System Terminal in the east corner of the room will give you a number of options to locate the necessary parts to launch a nuke. 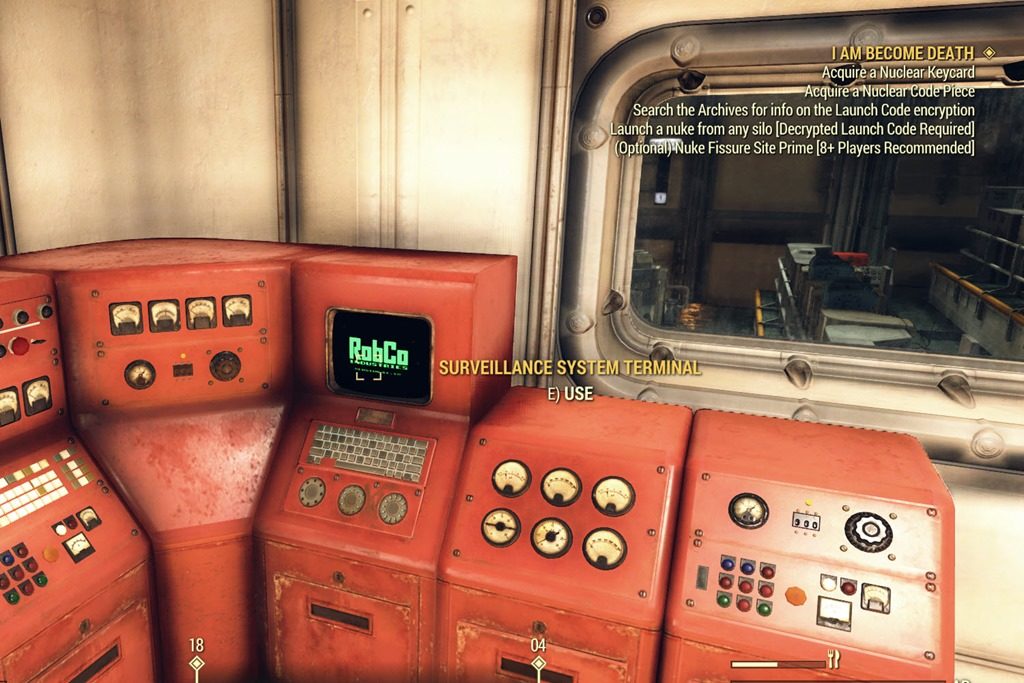 You need to locate Keycards and Launch codes for a specific silo. 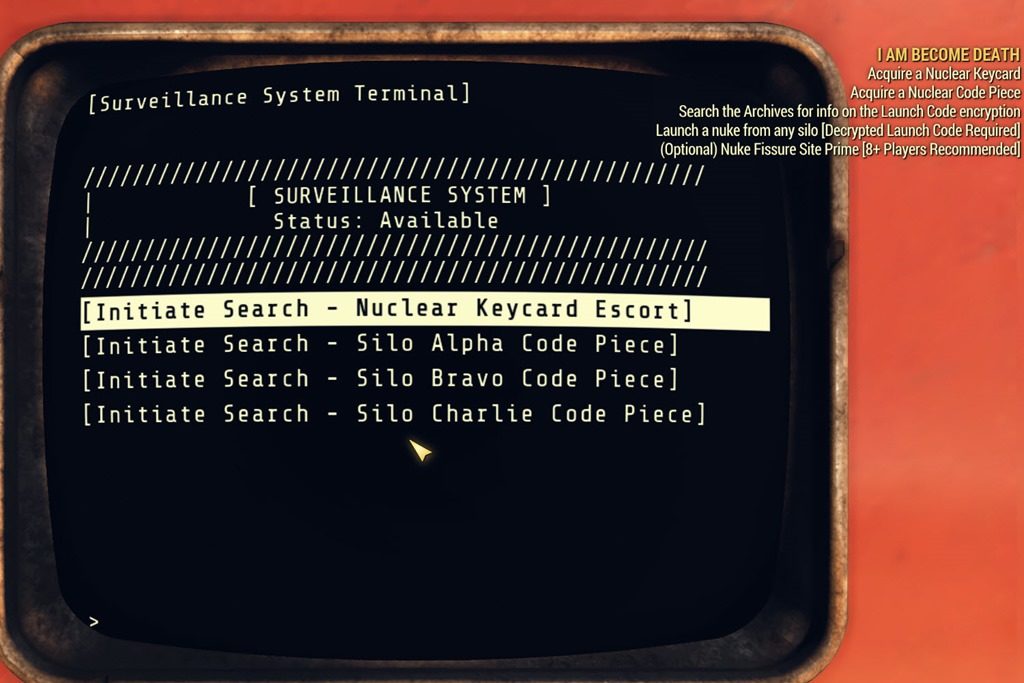 Make sure you check out the Archive Terminal nearby in the Enclave base in the armory section as well. It contains the schematics for the X-01 Power Armor as well as the code you need to proceed to decrypt the launch node. 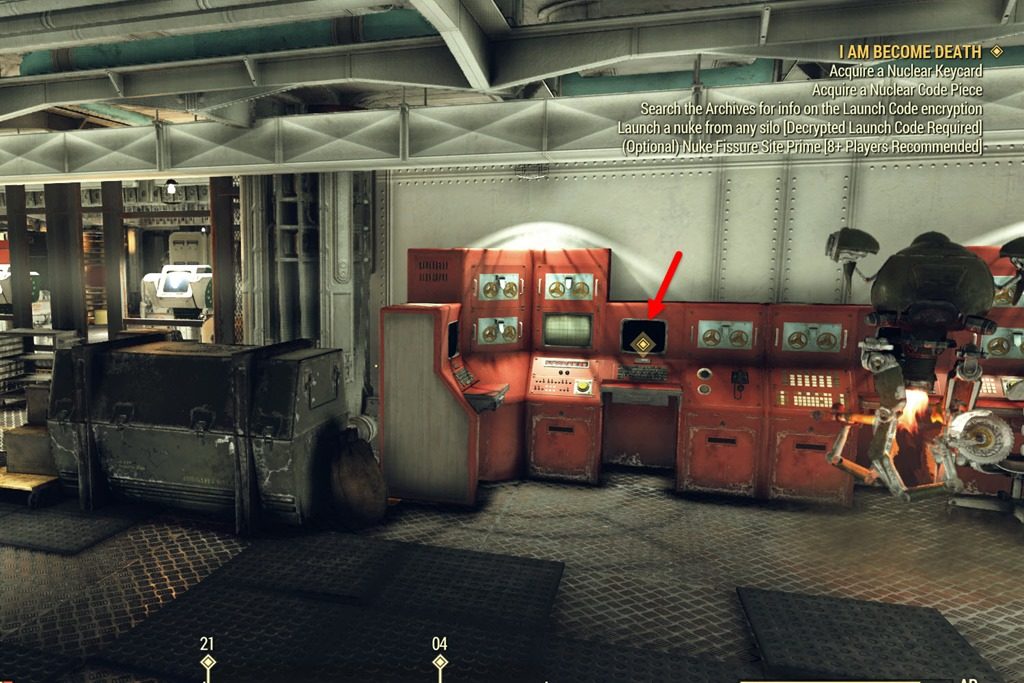 Now go into Data Archives –> Archive: Ellen Santiago, and then select The Code Pieces to get the password. 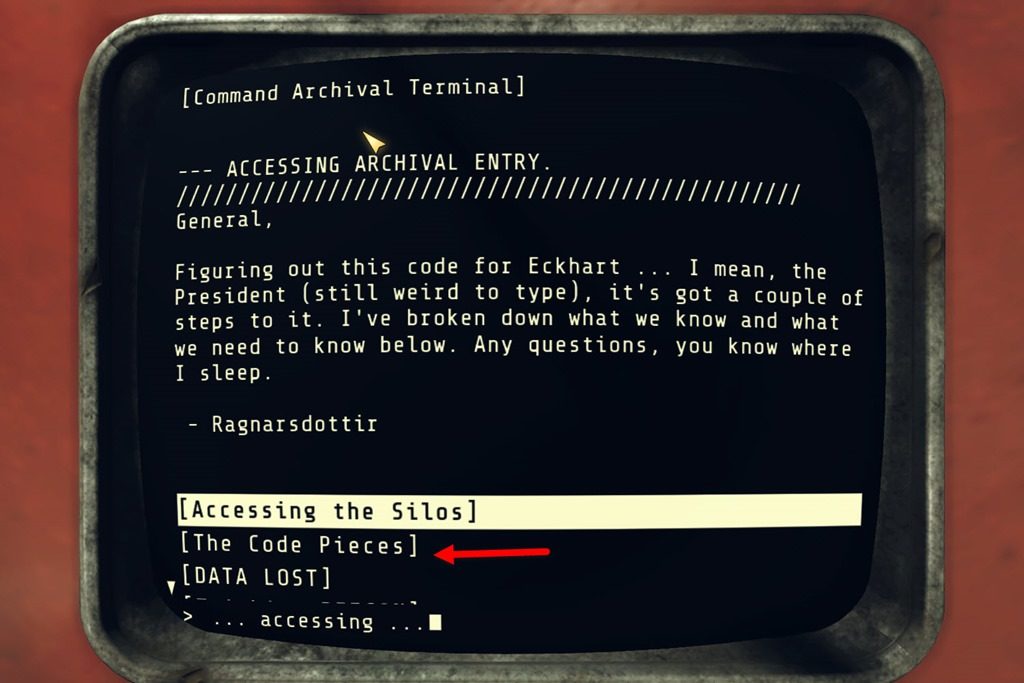 While you’re using the Archival terminal, you can go to the Schematics section and click on Prototype Power Armor Schematics, this will give you a full set of plans for the Prototype X-01 Power Armor that you can craft. 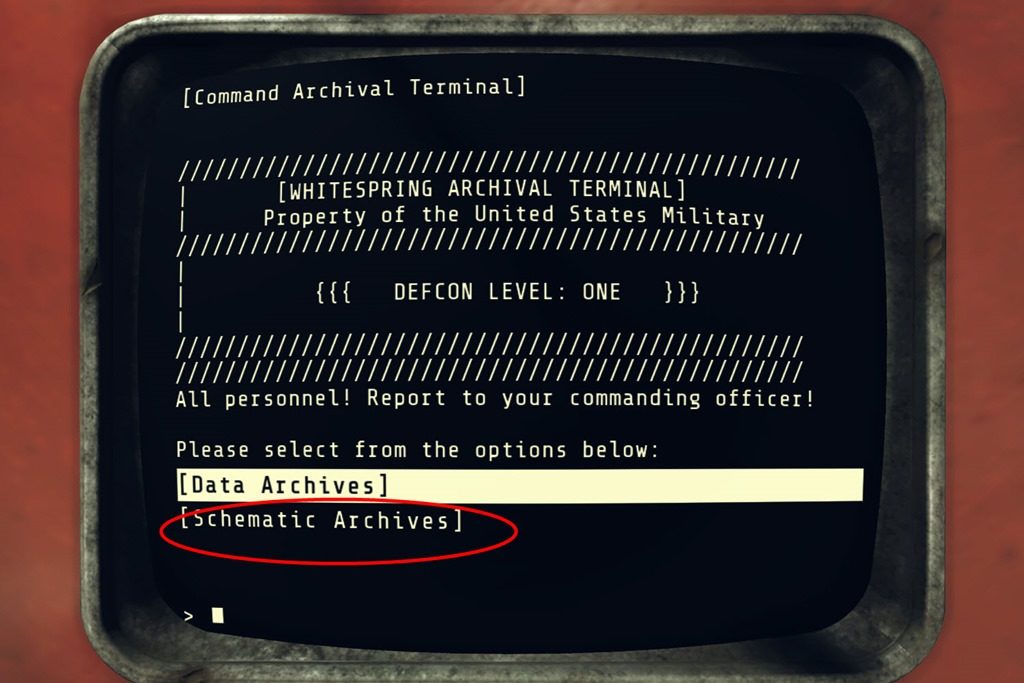 The X-01 Power Armor will give you the best Energy and Radiation resistance, which is very handy in an area that has been recently nuked by a nuclear missile. 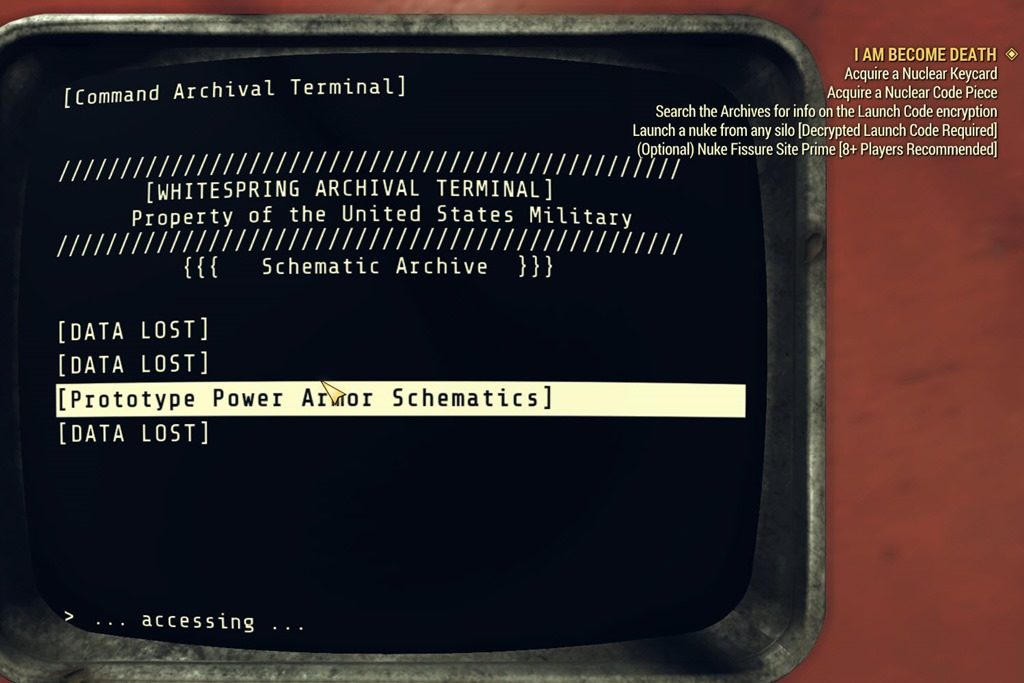 Now use the Surveillance Terminal to locate a Vertibot by selecting the mission Nuclear Keycard Escort. Keep in mind that these are single-use keycards, so once you fire a nuke or enter a wrong launch code, you will need to go find a new Vertibot to replace the card. 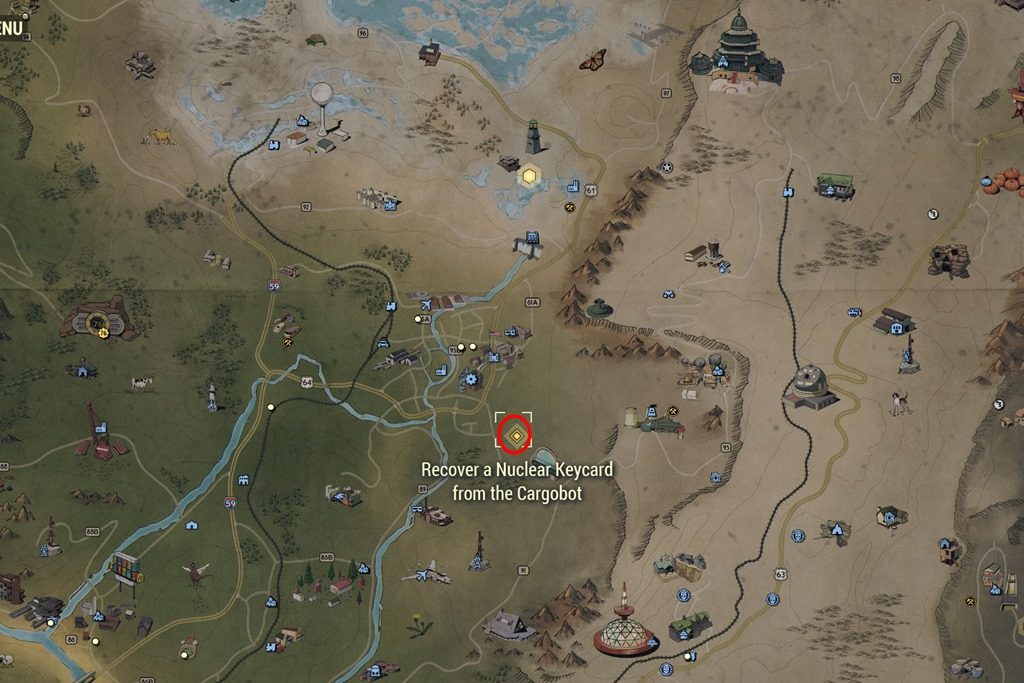 The Cargobot you need to shoot moves around so you need to track it down first and shoot it out of the air. 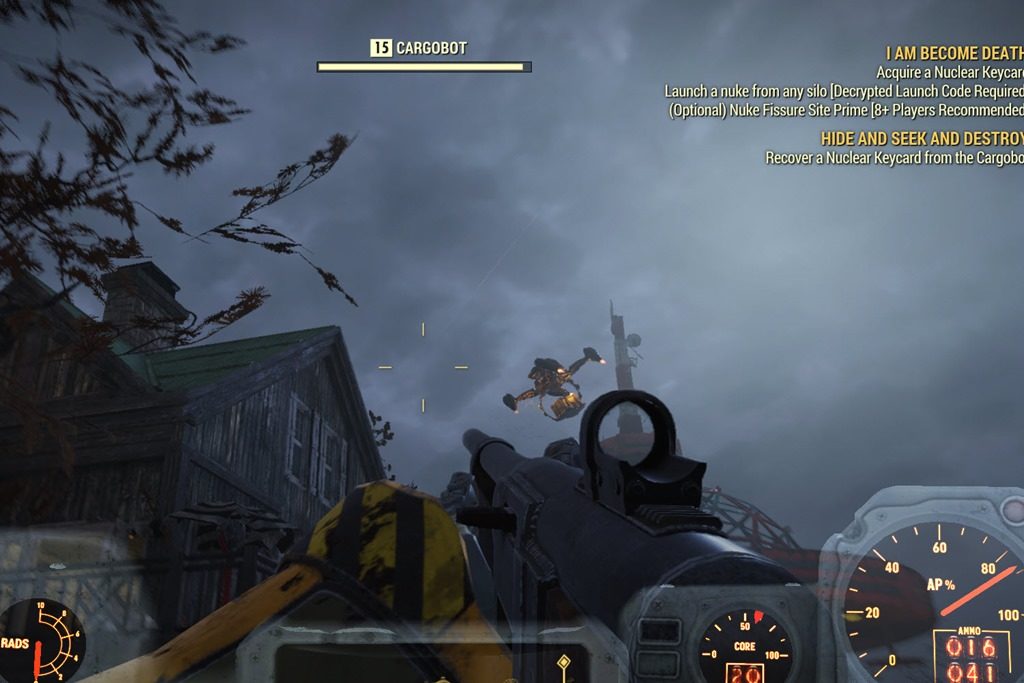 Now you will occasionally encounter Ghoul or Scorched officer that carries a beacon on their back that performs a slow beeping noise around the area.  Kill them to obtain one of the launch codes. Use the Surveillance Terminal to locate the rough location of these ghouls by selecting the mission for a Silo specific code piece. 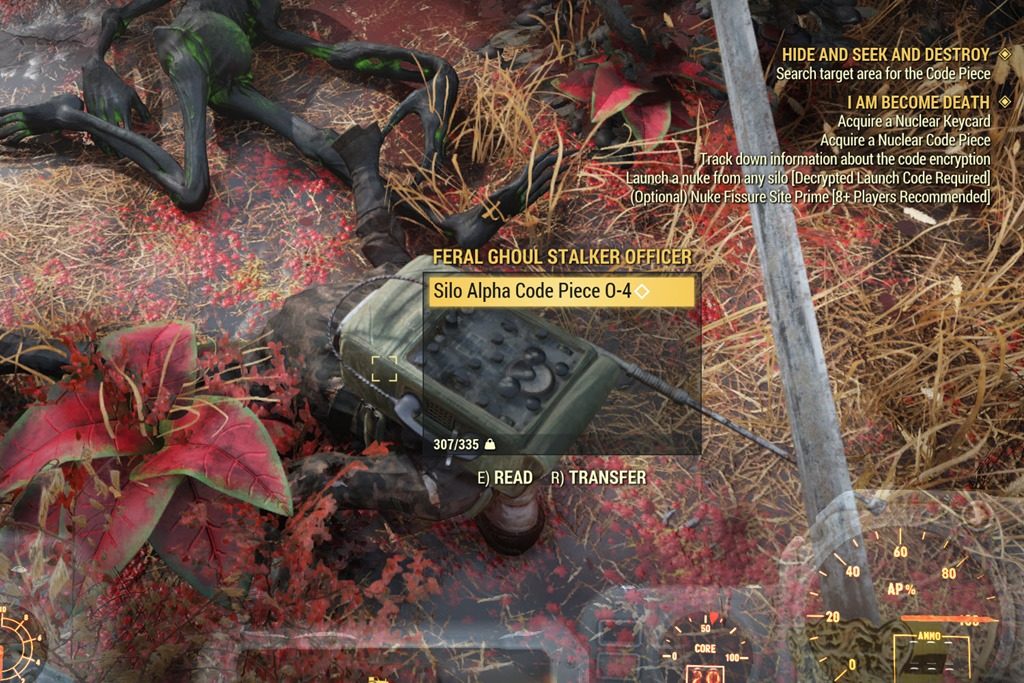 There are three nuclear missile silos: Alpha, Bravo and Charle and there are 8 launch codes for a specific silo (8 codes each for Alpha, Bravo, and Charlie). You will need all 8 silo codes and then use a cypher key to decode the launch code. 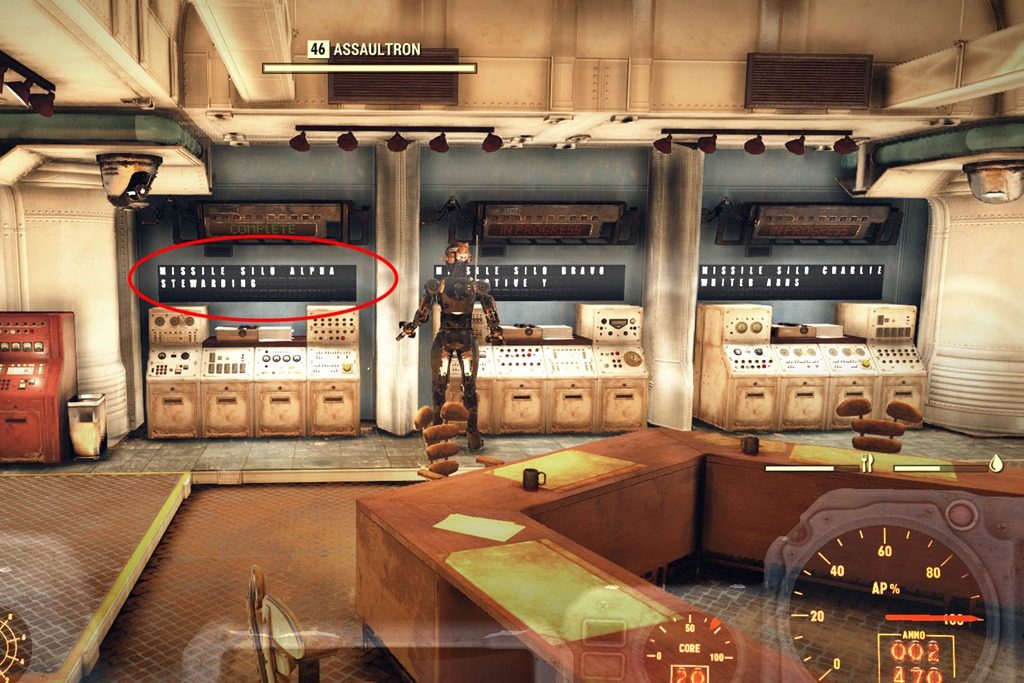 How to Track Down Information about the code encryption?

To track down the information about the code encryption step of the quest, you must go inside Mama Dolce’s Food Processing. 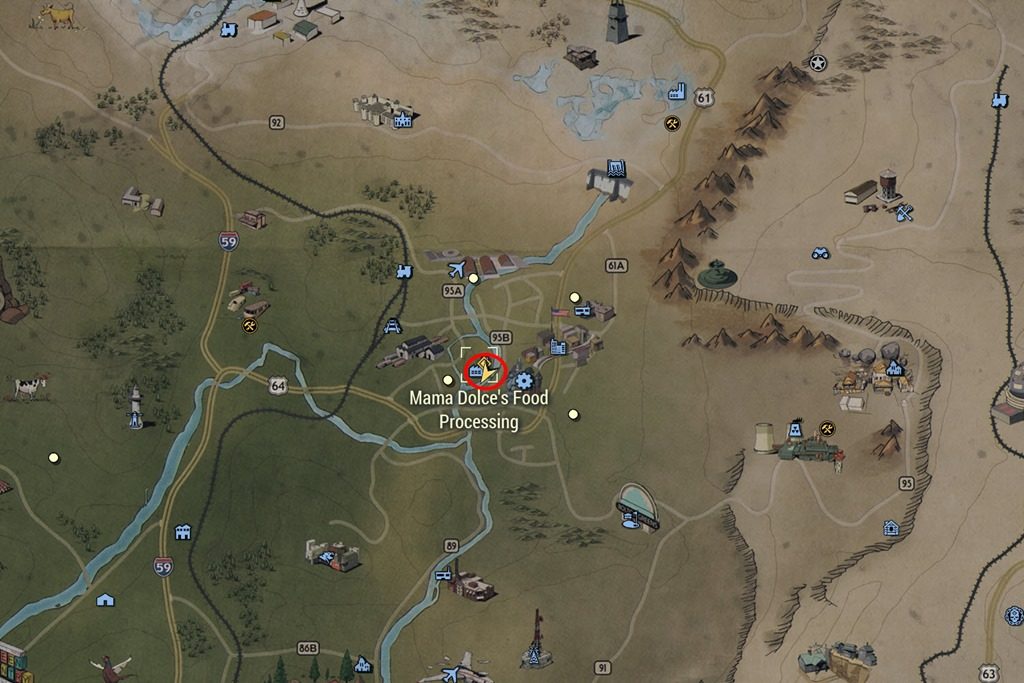 Head to the second floor in one of the offices you will find a Manager ID card. 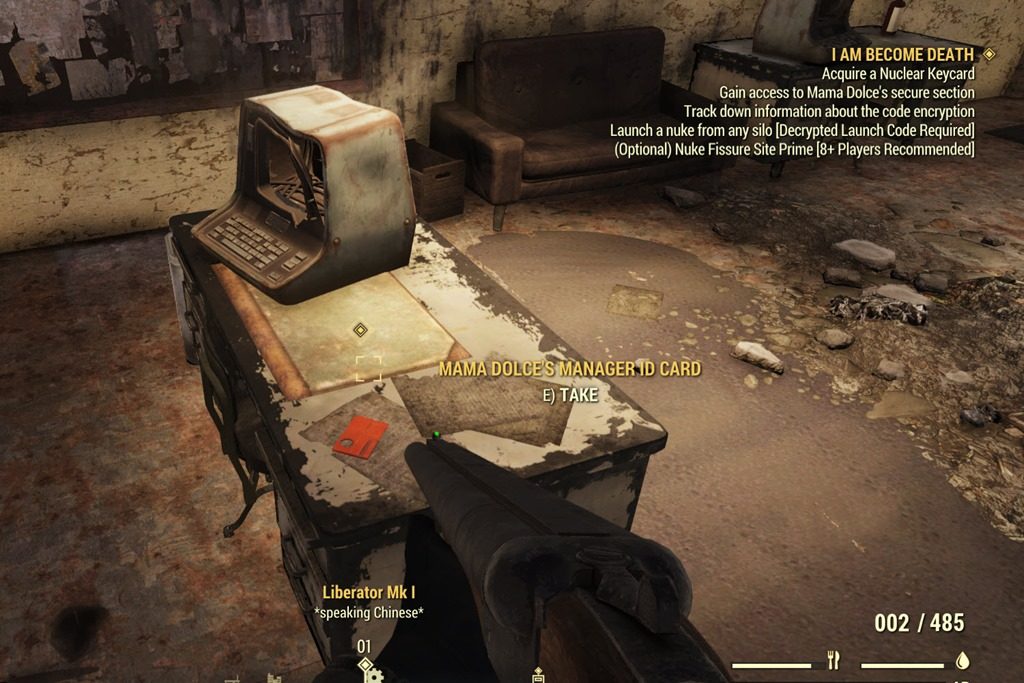 Now go outside to the big pipes around the food processing plant and look for a red hatch at where the big pipes bend, open it and use the Manager ID card to proceed into the secret base. 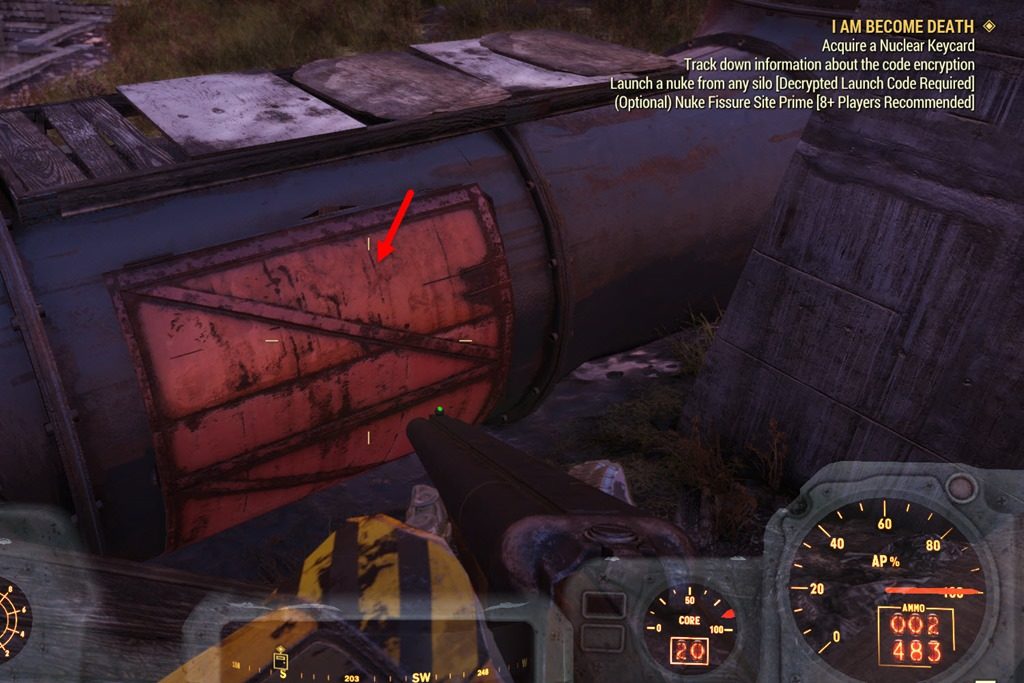 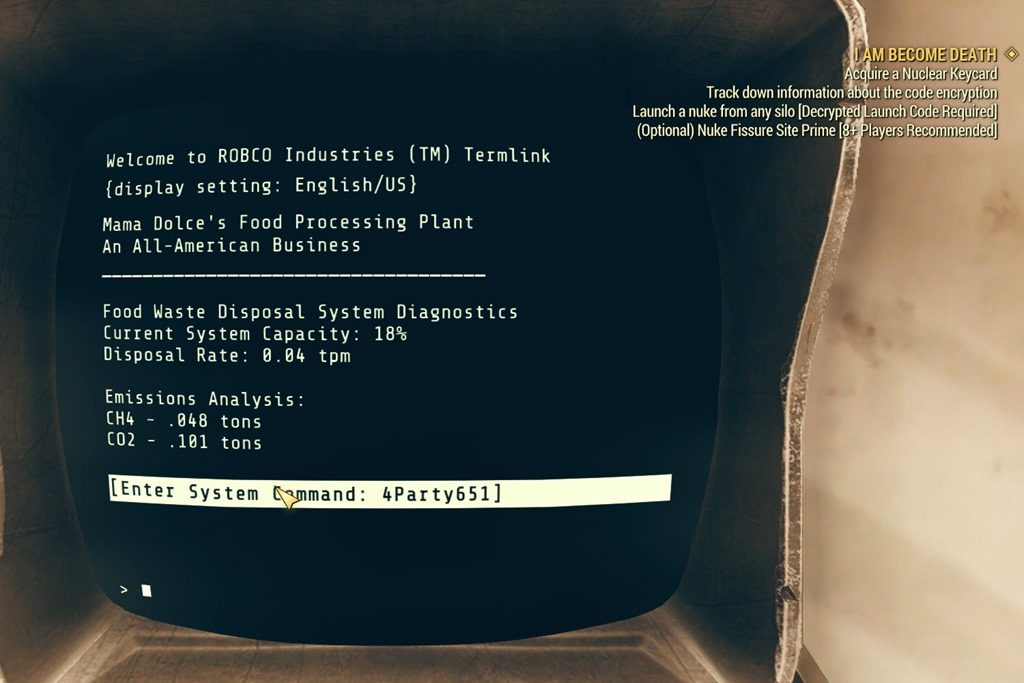 Enter the password from the Archive Terminal, select the entry 0.0.2.8 to update quest. 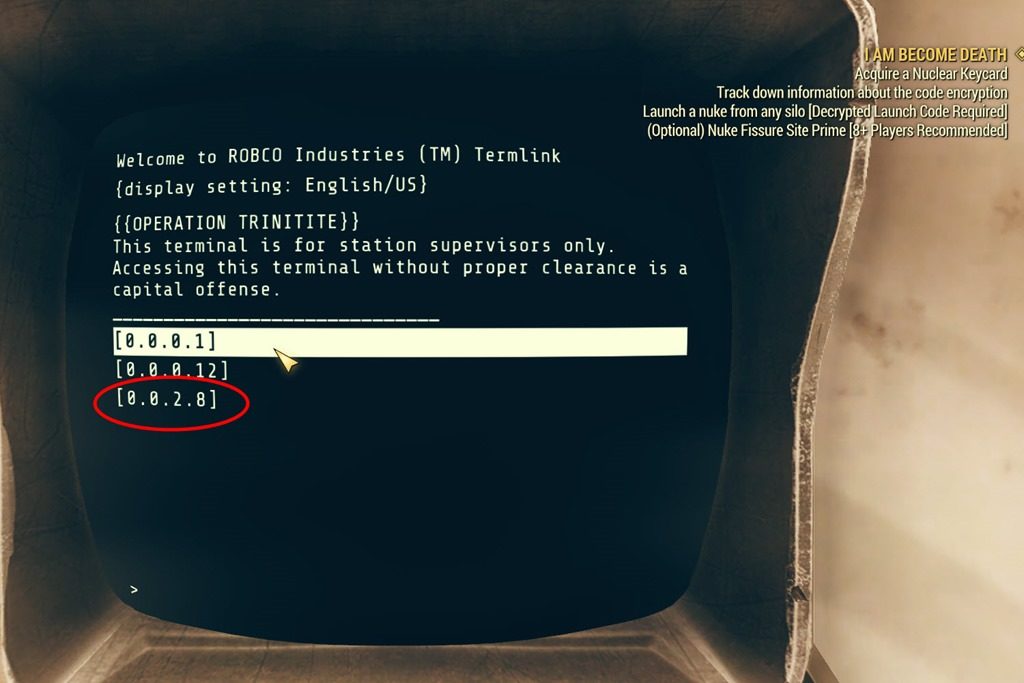 How to Launch the Code Decryption?

Once you have all 8 code pieces for a silo, take a look at the command portion of the Enclave base and write down the partial keyword from the missile silo board. 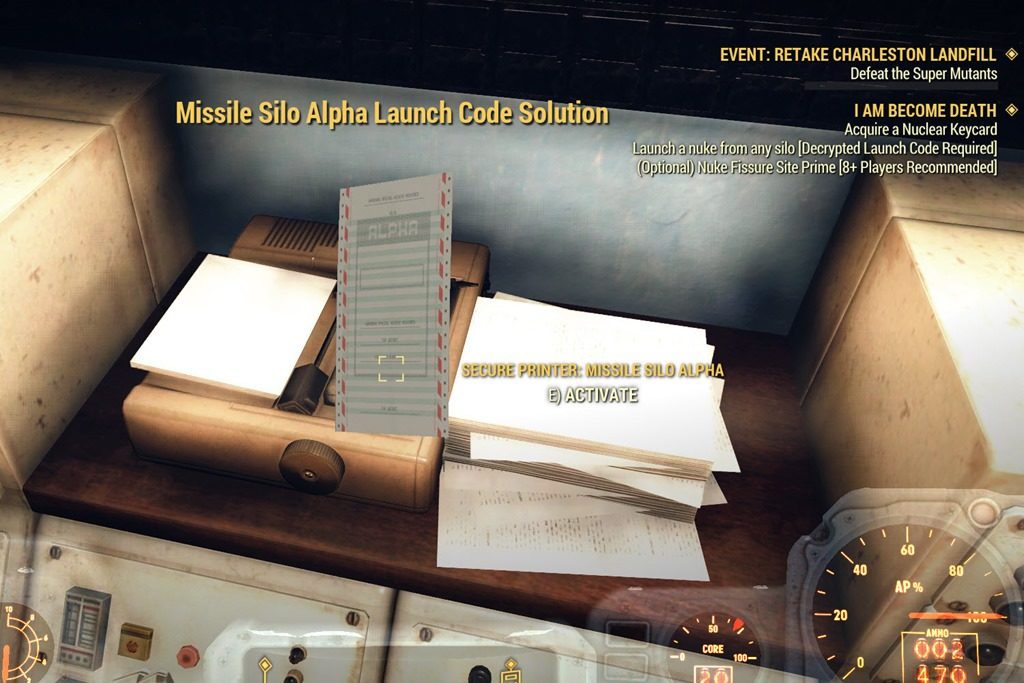 Now, look at the letters and numbers on your silo code pieces. 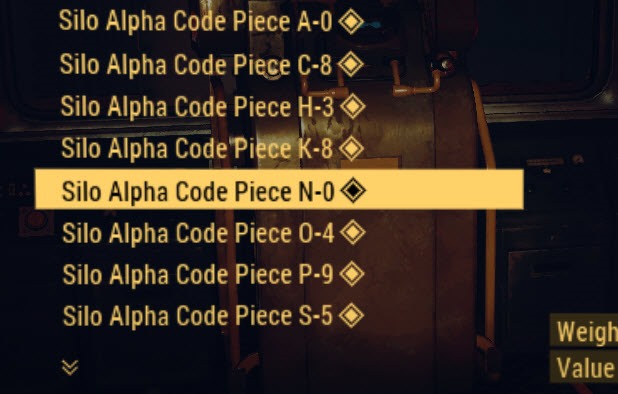 Next, use one of the players made decrypting tools such as this one: https://nukacrypt.com/ 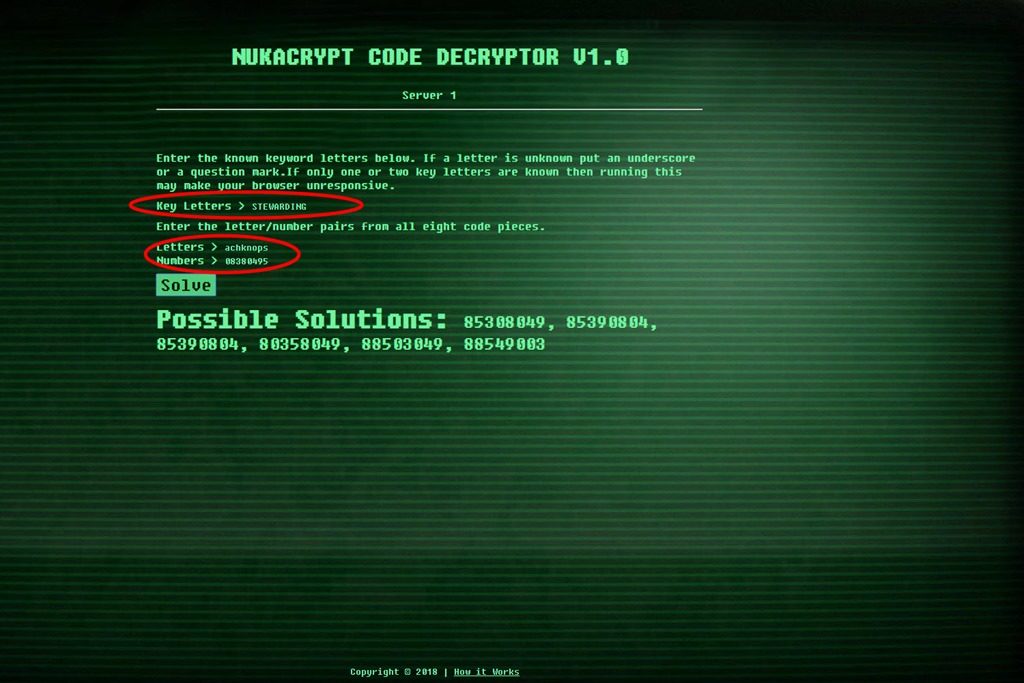 As you can see, the website will give you some possible solutions with only one being the correct code.

Now that you have the keycard, all 8 silo code pieces, and the decrypted launch code, you must venture out into the specific silo and clear the enemies inside to reach the launch console.

Once you’ve completed a silo and reached the launch console, you can select an area on the map to launch your nuke.

Now that you know how to launch the Nukes hidden in the Silos in Appalachia, you can repeat the collection process to continue launching nukes for high-level loot and enemies.

And there you go, you’ve completed the final quest of the Fallout 76 Enclave faction series. Well done!

Spider-Man PS4 Walkthrough Part 3 – My OTHER Other Job