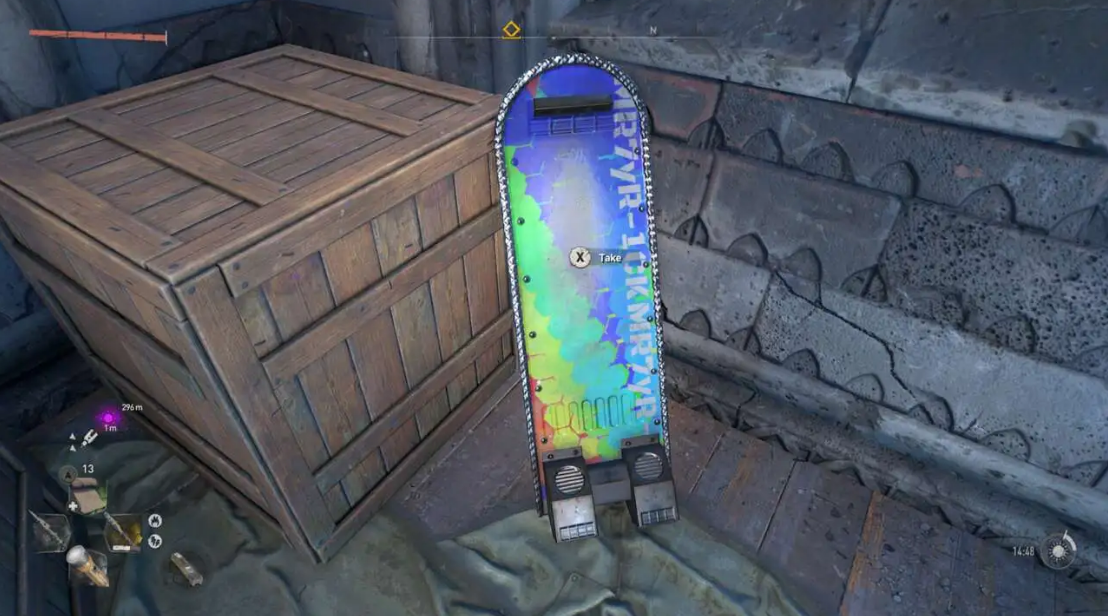 You may let out your inner Marty McFly with the hoverboard Easter egg in Dying Light 2, and if you know a little trick, you can even keep this forward-looking mode of transportation for yourself. Even though the flying broomstick that can be unlocked is far more handy, this gadget is still a lot of fun to work with. Hoverboards are similar to traditional skateboards in how they function, but they float above the ground and require the rider to generate momentum in order to move forward. For those of you who are unaware of this, let me explain. The hoverboard’s functionality in Dying Light 2 is unaltered. This guide will walk you through the process of locating and activating the Hoverboard in Dying Light 2 so that you can ride it. So let’s get started:

Read Also: How to Kill Volatiles and Get trophy/achievement in Dying Light 2

You need to travel to the Central Loop neighbourhood of Villedor, which is the setting for Dying Light 2, in order to use the hoverboard, just like the majority of the other Easter Eggs in the game. You will be able to access the rest of the map once you have completed the primary quest known as “Let’s Waltz.” The next thing that you need to do is locate the Church of Saint Thomas Apostle in the region of Saint Paul Island, which can be found on the most eastern part of the Villedor peninsula.

In order to proceed with the mission, you will need to ensure that the power cables are connected to the appropriate power boxes, which may be found inside the church. They are not hard to locate, and numbers printed on each box indicate which cables should be routed to which locations. Climb the tower of the church once the power has been restored to it, and look for the room that contains the radio.

Turn on the radio and pay attention to Fatin and Tolga, the very brilliant brothers who appeared in the very first Dying Light game. After some time has passed, they will become silent, and then a vibrant hoverboard will materialize inside the radio room. When you interact with the hoverboard, it will vanish after a brief display of lightning. You will need to carry through this process a further two times before the hoverboard challenge will become available to you, so be patient.

Hold off on leaving the radio room for the time being, activate your survival sense to locate the red footprints, and then just follow them. Following the footprints will bring you to the subsequent hoverboard, which can be found in the Muddy Grounds region near a bridge. If you turn your body such that you are facing west, the hoverboard will be on the side of the bridge that is on your right.

You have not yet completed the mission, but if you discover another hoverboard, it will allow you to complete the task, and then you will be able to ride the futuristic hoverboard. The third and final hoverboard may be found in the Muddy Grounds neighbourhood, specifically in the vicinity of the blue car that connects the Garrison, New Dawn Park, and Muddy Grounds neighbourhoods. The hoverboard is stashed away in the trunk of the car, which houses the baggage compartment. To begin the parkour challenge, you need only remove the cover from the container and interact with the hoverboard.

How do you get a bike in Dying Light 2?

You will be able to access the developer menu if you have progressed far enough in the game to reach the open-world section. In Dying Light 2, the hidden bicycle is located in the “Items” menu, which may be reached by selecting “List” from the menu options. After that, you will notice that a bike has spawned in front of where you are exactly at that moment.

Can you still keep the hoverboard in Dying Light 2?

The Hoverboard will no longer be available to players once they have successfully completed the Parkour Challenge with it. There is a bug that can let players keep their hoverboards if they use it in a certain way. Before commencing their Parkour Challenge, players will need to ensure that they have a free slot in their accessory inventory.

Is there a secret gun in Dying Light 2?

Is there a car in Dying Light 2?

There is a rideable vehicle that is well hidden in ‘Dying Light 2,’ and it seems like a lot of fun. Dying Light 2 is a game that requires you to constantly be on the move.

Can you save Buddy the dog in Dying Light 2?

After hearing what took place, you will be faced with a choice: either “Let the dog be” or “Put the dog out of its suffering.” It makes no difference which option you go with because the dog’s future is already decided regardless of what you decide.