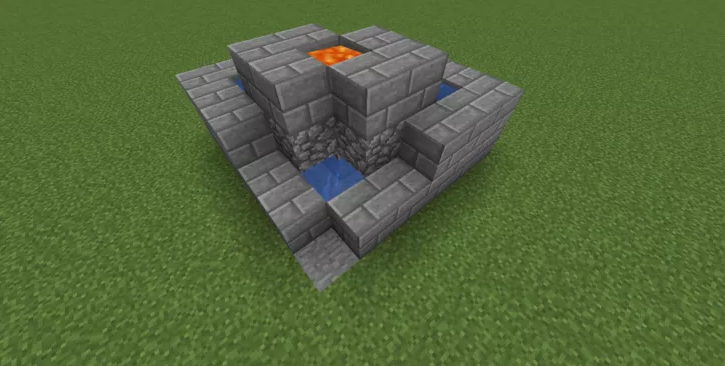 Read Also: How to Use a Beacon in Minecraft

In order to construct a cobblestone generator, the following components will be required from you:

After you have crafted two buckets, you will need to find a source of both water and lava. Once you have found these sources, you will need to interact with the liquids while holding an empty bucket in order to fill it up. Players that are participating in the skyblock gamemode will often receive water as soon as they spawn in the globe. Water can also be discovered relatively quickly and easily throughout the first few minutes of exploring the area. Please refer to the following illustrated how-to guide, which is split down into its component sections and steps, in order to build a Cobblestone Generator in Minecraft:

1. Dig a rectangular trench in the exact same way as is shown in the image below:

2. As shown in the figure that follows, pour water or ice on top of the block that is situated on the most right-hand side of the trench.

TIP: If you are planning to utilise an ice block instead of a water bucket, it is crucial that you put the ice block down first, and then break it, in order to spawn water. If you do not follow this procedure, you will not be able to spawn water.

3. As seen in the image that follows, place lava on top of the block that is situated on the extreme left edge of the trench.

4. A cobblestone block should immediately spawn for you if you have followed all of the steps correctly, as illustrated in the image to the above.

How many blocks is a cobblestone generator?

Advantages include being resourceful, simple to produce, requiring less room, and producing three cobblestone blocks rather than just one. Con: Even after mining the block, there is no guarantee that one will obtain it, as the block may fall into the lava before one can grasp it.

The following is a straightforward cobblestone generator. In the event that individuals choose to add numerous versions, there are five different tiers accessible for their selection. This was conceived primarily as a stand-alone building block with the intention of assisting servers.

Can you get cobblestone without mining?

Why is my cobblestone generator making obsidian?

When making cobblestone, one must exercise extreme caution to prevent the moving water from coming into contact with the lava source block. When this is done, the source of the lava is destroyed, and it is turned into obsidian.

Can you make an automatic cobblestone generator in Minecraft?

Automatic cobblestone farms in Minecraft normally function according to the idea that lava that comes into touch with water immediately transforms into a block of cobblestone. This principle is at the heart of Minecraft’s gameplay.